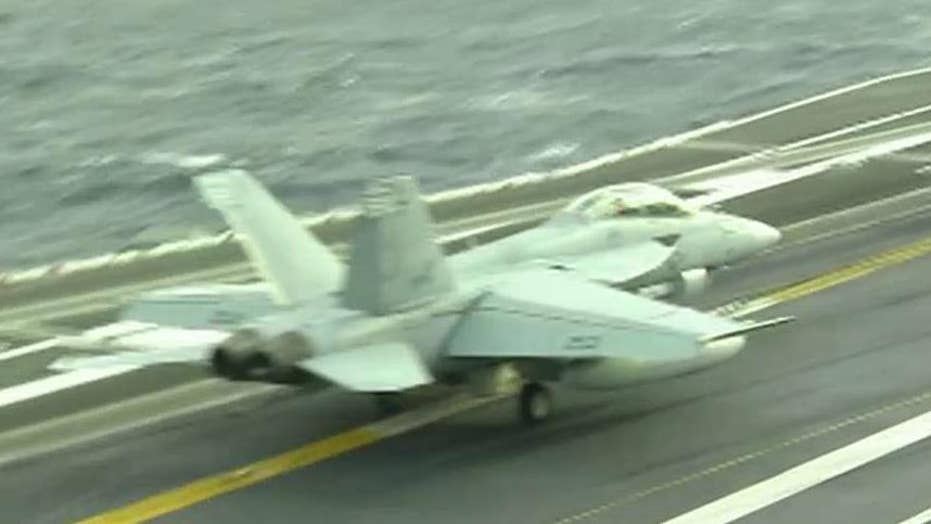 Lucas Tomlinson reports from The Pentagon

Less than a week before President-elect Donald Trump spoke with Taiwan’s president over the phone, China flew a pair of long-range nuclear-capable bombers around Taiwan for the first time, two U.S. officials revealed to Fox News.

TRUMP REMAINS ON DEFENSIVE AFTER CALL WITH TAIWAN PRESIDENT

On Nov. 26, two Chinese Xian H-6 bombers, along with two escort planes, a Tupolev Tu-154 and Shaanxi Y-8, flew around the island of Taiwan from mainland China, taking off and landing from two separate Chinese military bases.

The escort jets were used to collect radar information and conduct other surveillance on American allies such as Japan, Fox News is told. The Chinese bombers stayed in international airspace, according to officials.

At different points of the flight, Chinese J-10 and Su-30 fighter jets performed escort duties for the Chinese strategic bombers.

Japan scrambled eight F-15 fighter jets to intercept the Chinese flight at one point in the skies somewhere northeast of Taiwan, according to the officials.

"This was the first time that Chinese aircraft circled around Taiwan," Deputy National Defense Minister Lee Hsi-ming said, adding that China has said similar flights would occur in the future according to Focus Taiwan News Channel.

"China has steadily built up a massive military capability in the area around Taiwan. This isn't simply a matter of flying bombers. Understand that technically, we can't object to flying bombers near Taiwan if we are flying combat aircraft and reconnaissance aircraft near China. This is simply legal under international law," Anthony H. Cordesman, the Arleigh A. Burke Chair in Strategy at the Center for Strategic and International Studies, said. "Taiwan faces a much more serious Chinese challenge than it has ever faced before."

Elsewhere, a Russian Su-33 crashed while attempting to land aboard a Russian aircraft carrier in the eastern Mediterranean. The incident occurred Saturday according to The Aviationist, which was first to report the crash.

"After performing a combat mission over Syria a Sukhoi-33 fighter-jet overran the runway while trying to land on The Admiral Kuznetsov aircraft carrier. The arresting cable’s rupture was the reason," read a statement from the Russian Defense Ministry according to Russian state media. The Russian Defense Ministry announced the pilot was safe after ejecting into the Mediterranean.

It was the second time in less than three weeks that a Russian jet crashed while attempting to land aboard the aircraft carrier in the eastern Mediterranean. Fox News was first to report the first crash of a MiG-29 last month.