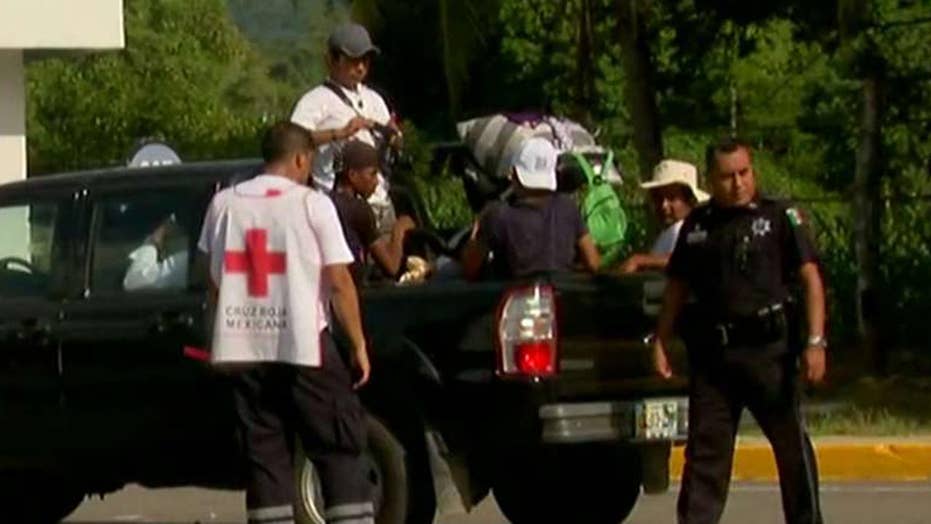 Mexican police assisting migrants on road to US

William La Jeunesse on what he's seeing at a checkpoint in Chiapas, Mexico.

Mexico City is preparing for the arrival of the caravan of 7,000 Central Americans making its way to the U.S. border.

A representative from the capitol city visited tiny Niltepec Monday to assess what Mexico City would need to provide for the migrants. Under consideration, he said, is world-famous Azteca Stadium, which has the space and facilities necessary to handle a large group. Another is the Monument of the Revolution, which is close to the city center.

Organizers of the caravan said Monday that they asked the state of Oaxaca for 150 buses to transport the group from southern Mexico to the capital. They argue the steep and narrow mountain roads make the 450-mile journey unsafe for the caravan and motoring public. The buses could save the caravan a three-week walk, based on their 25-mile daily average.

After joining the caravan since it crossed into Mexico, each day thousands of migrants take to Mexico’s main highways to travel from one city to the next. They often have little regard for motorists at speeds greater than 50 mph, running across lanes and retrieving children unaware of approaching traffic. They climb on moving cars and trucks and jump off at will. One woman retrieved a baby carriage across four lanes of screeching traffic. Mountain roads with blind curves could prove deadly.

The caravan is moving faster, but for the second time came up short on food and water in Niltepec, population 5,000. By 3 p.m., not a restaurant in town had any food left and the immigrants sprinted to meet any water truck that showed up.

Over the last week, most of the immigrants interviewed were uninformed and naive about what to expect upon arriving at the U.S. border. None spoke of persecution and only one used the word asylum. They talked almost exclusively about work, and leaving poverty behind.

A migrant woman slowly begins to wake after sleeping on a sidewalk in Tapanatepec, Mexico, Sunday, Oct. 28, 2018. Thousands of migrants who are part of a caravan of Central Americans trying to reach the U.S. border took a break Sunday on their long journey toward the U.S. border. (AP Photo/Rodrigo Abd))

A lawyer advised migrants on Monday for the first time on what to say when they arrive at the U.S. border. Speaking in Spanish, Ian Philabaum, an immigrant rights lawyer in the U.S., told the group to expect to be detained for weeks or months and alerted them to the possibility that they could be separated from their children. He also explained the five questions asked by U.S. officials that migrants must be prepared to answer:

- why are you running away?

- what is your relationship to that person or group?

- why didn’t you tell police?

- why can’t you stay in another place in your home country?

Philabaum, who works with several migrant shelters from Texas to Oregon, told the group they had a legal right to apply for asylum, regardless of what officials might tell them. Legally, asylum is simply an assertion you are afraid to return to your home country.

So far, reports put the caravan between 4,000 to 7,000 people.  Some 1,700 requested asylum in Mexico, 700 asked to return home and more than 100 sought work permits under a new Mexican government program.

More could join after hearing President Trump’s border security speech Tuesday, but Lucas Rocha said he is heading to Houston.

“No, not going to Mexico,” he said. “No much working in Mexico, not much money.”

Not sitting far away, 47-year-old Elvis Romero nursed blisters on his feet.

While each Mexican city hosting the migrants faces challenges, a world health official told us he expects chaos in Tijuana. President Trump is expected to slow to a trickle the number of asylum cases the U.S. accepts each day at the port of San Ysidro.

That creates a bottleneck in a city already overflowing with Central American families and just three or four underfunded, bare bones shelters with total capacity under 200.

The official, who asked that his name not be used, predicted widespread hunger and crime, with teens turning into drug mules for traffickers to make ends meet. Tijuana already has the fifth highest homicide rate in the world surpassing towns in Honduras, El Salvador and Guatemala.