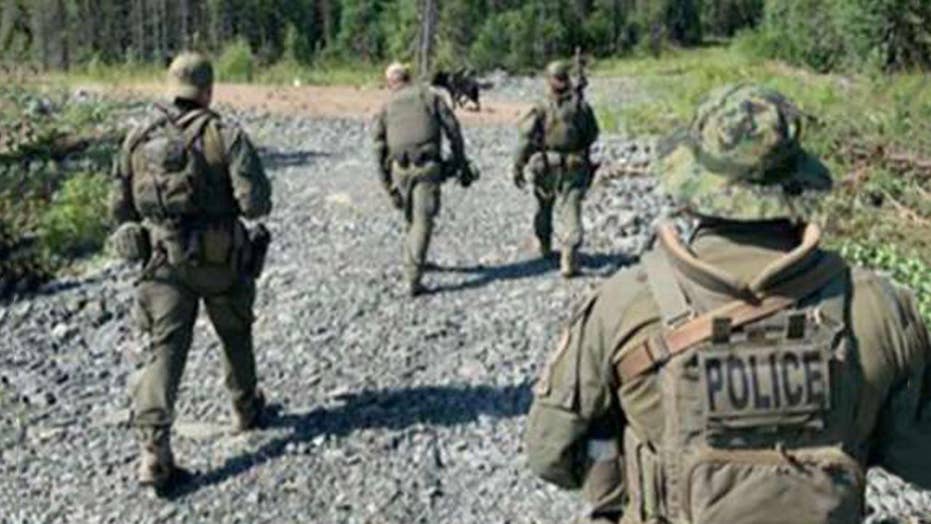 Canadian police to scale back manhunt for two teens suspected in killings of American woman, two others

Investigators insist that they are not stopping the search for killing spree suspects Kam McLeod and Bryer Schmegelsky; Jacqui Heinrich reports.

Authorities in Canada deployed a specialized dive team to search a section of river in a remote and rugged part of northern Manitoba as they continue the hunt for two young men suspected in the killings of three people that has spawned a nationwide search.

The Royal Canadian Mounted Police (RCMP) in Manitoba said the agency's underwater recovery team arrived in Gillam on Saturday night and divers started to search a section of the Nelson River on Sunday.

Police tweeted on Sunday that divers were deployed because, “On Friday afternoon, #rcmpmb officers searching from a helicopter, located a damaged aluminum boat on the shore of the Nelson River."

About an hour-and-a-half later police tweeted a picture of the boat and wrote, “This is the damaged aluminum boat found by #rcmpmb officers on the shores of the Nelson River during a helicopter search on friday afternoon.”

Kam McLeod, 19, and Bryer Schmegelsky, 18, have eluded capture for nearly two weeks in the wilderness of northern Manitoba. The two have been charged in the death of Vancouver professor Leonard Dyck and suspected in the double homicide of Australian Lucas Fowler and his American girlfriend, Chynna Deese. Witnesses reported seeing the men in Dease Lake, B.C., Cold Lake, Alta., Meadow Lake, Sask., and Gillam, where the trail went cold.

On Wednesday, Canadian police said they were scaling down, but not abandoning the hunt in the region for the murder suspects. Authorities have used helicopters, drones, boats, and dogs to search approximately 4,200 square miles of tundra, muskeg and dense forests. At one point a military Hercules aircraft was used in the search, which has stretched across three provinces.

"To be clear, we're not ending the search," Royal Canadian Mounted Police Assistant Commissioner Jane MacLatchy said during a news conference in Winnipeg last week. "I know that today's news is not what the families of the victims and the communities of northern Manitoba wanted to hear. But when searching for people in vast, remote and rugged locations, it is always a possibility that they are not immediately located."

The RCMP said Saturday the members of the underwater recovery team are "highly trained," and that to be a part of the group each person must pass a three-day selection process before undergoing "an intensive" five-week underwater recovery induction course.

Manitoba RCMP's Underwater Recovery Team arrived Gillam, Manitoba Saturday night and divers will begin to search a section of the Nelson River on Sunday, according to authorities. (RCMP Manitoba)

Each RCMP underwater recovery team member has access to "a range of advanced equipment," which can assist members in their underwater searches.

Officials said Wednesday there will be a phased withdrawal of RCMP and military personnel and assets from the Gillam area, about 660 miles north of Winnipeg, where a burned out vehicle belonging to the suspects was found last week. MacLatchy wouldn't say at the time how many officers will remain involved in the search.

McLeod and Schmegelsky have been charged with second-degree murder in the death of Dyck, a University of British Columbia professor whose body was found July 19 in British Columbia. They are also suspects in the fatal shootings of Australian Lucas Fowler and Chynna Deese of Charlotte, N.C., whose bodies were found July 15 along the Alaska Highway about 300 miles from where Dyck was killed.

The search for the pair — which has involved the canvassing of more than 500 homes and buildings and following up on over 250 tips — has left some residents scared and on edge.

"However, even with this extraordinary effort, we have not had any confirmed sightings of the suspects since the burned vehicle was located," MacLatchy said.

There is a possibility the suspects had some sort of assistance in fleeing the area, MacLatchy said, adding there's also a chance they could be dead.

"Everything is possible at this stage," she said. "The north part of the province is a very unforgiving place. We are keeping all possibilities in mind as we go forward."

Earlier in the manhunt, Schmegelsky's father, Alan Schmegelsky, said he expected the nationwide manhunt to end in the death of his son, who he said is on "a suicide mission."

A survival expert familiar with the terrain of northern Manitoba told Fox News the two young men could survive in the elements “for weeks" depending on their condition and their will to stay alive.

Dave MacDonald, who runs the International Canadian School of Survival and served 19 years as a search-and-rescue technician with the Royal Canadian Air Force, told Fox News on Wednesday there's “an abundance of food” for McLeod and Schmegelsky if the men — who grew up in the wilderness of Port Alberni, British Columbia — know how to search for it.

“Even if they had next to no gear, they could go a very long time if they have the will to survive,” MacDonald said.