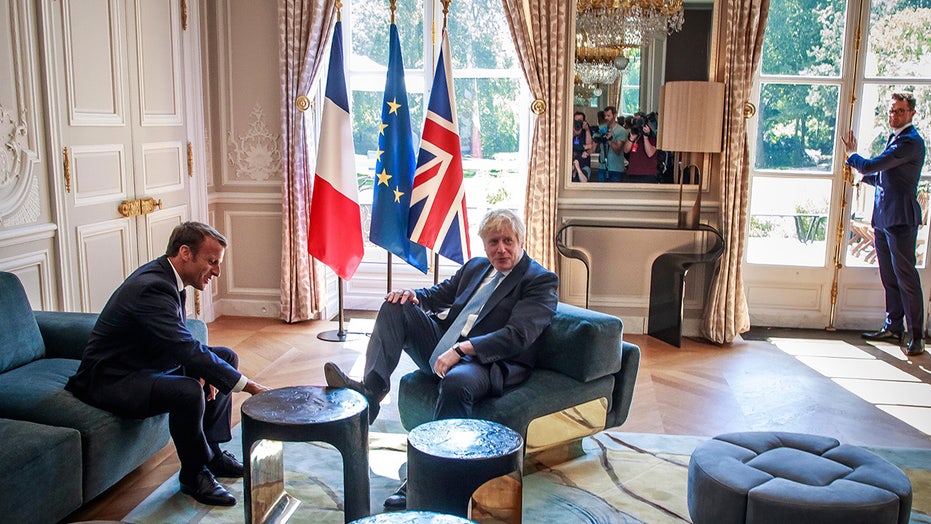 The British prime minister was labeled “rude” and “embarrassing” after a photo was released showing him with his foot casually on top of a table in France’s Elysee Palace while meeting with French President Emmanuel Macron on Wednesday.

Boris Johnson met with Macron to press the French leader to accept his request to reopen Brexit negotiations. However, it was his overly lax demeanor that raised eyebrows.

“Rude and embarrassing. Imagine if Macron put his foot on the table at Buckingham Palace,” Johnson’s biographer Sonia Purnell tweeted.

“That should win Manu round,” he added in a tweet.

Johnson's aides told Dunn that the foot on the table was a joke after the lunch and a walk around the palace gardens.

"There was a good atmosphere between them by then," Dunn tweeted, quoting an aide and sharing a video of the interaction.

BRITISH FOREIGN SECRETARY: UK WILL LEAVE EU WITHOUT A DEAL IF NECESSARY, BY END OF OCTOBER

Johnson was in Paris on the second stop of his first European tour as U.K. leader, turning on a charm offensive while stressing that the U.K. wants a Brexit deal with the E.U.

He said it was his duty to carry out the wishes of the British people, who by a narrow margin voted to leave the E.U.

“As you yourself have just pointed, Emmanuel, it is vital for trust in politics, that if you have a referendum, then you should act on the instructions of the voters,” he told Macron. “And that is why we must come out of the E.U. October 31, deal or no-deal. Then, of course, we can take our relationship forward. I agree with you wholeheartedly, Emmanuel, that it is a quite extraordinary relationship.”

Johnson was buoyed Wednesday by German Chancellor Angela Merkel, who raised the possibility in talks that a negotiated departure from the EU may still be possible if Britain comes up with alternative plans for the Irish border within 30 days.

Macron said the so-called Irish backstop – which is an insurance policy if the two sides cannot find another way to prevent the return of a hard border between Northern Ireland and the Republic of Ireland – is indispensable. He agreed with Merkel that “something clever” could be found in the next 30 days.

“I was always said to be the tough one of the gang,” he said, because he had made it “very clear” a deal that would endanger the E.U. would not be acceptable.

Technological solutions have so far proved inadequate, and it is unclear what new proposals Johnson may offer in the next few weeks.

Macron added that France is prepared for a no-deal Brexit, even though that's not the country's preferred option.

Johnson is seeking concessions from the EU to win support in the British Parliament, which has already rejected three times the agreement negotiated by former leader Theresa May.

The Elysee called the encounter between the two leaders “complete” and “constructive.”