Nuns of the Lutheran Lazarus Order in Berlin are about to recognize a bittersweet anniversary that transformed their lives.

This month marks 30 years after the fall of the Berlin Wall, the line of demarcation which split the former democratic West Berlin and what used to be the communist East. It also commemorates, as The Associated Press reported, those who were arrested, injured or died as they sought to escape by tunneling under the wall, swimming past it, climbing it or flying over it.

At least 140 people died trying, according to the latest academic research.

People climbing the Berlin Wall which had divided the city since the end of World War II, near the Brandenburg Gate, on Nov. 10, 1989. (AP Photo/Jockel Finck, File)

FORMER NAZI CONCENTRATION CAMP GUARD, 93, ON TRIAL IN GERMANY AS ACCESSORY TO MORE THAN 5,000 MURDERS

Sister Brigitte Queisser said her order ran a clinic directly across the street from the wall that provided immediate help to those who were injured trying to get through the barrier, with its watchtowers and armed soldiers.

“Families were torn apart, people couldn’t move freely from one neighborhood to the other anymore, many died trying to run away to the West,” the 77-year-old said. 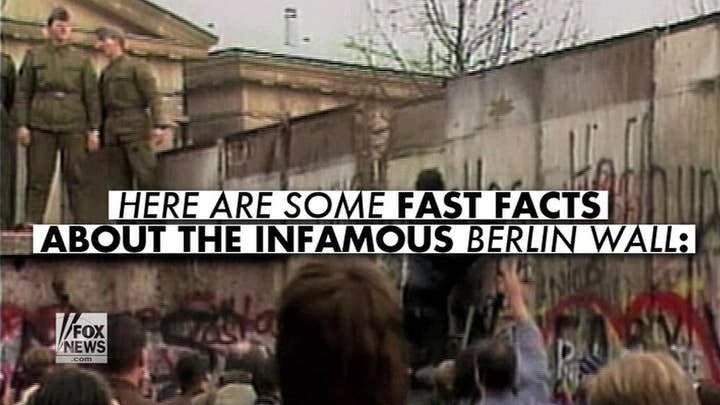 “I often thought, ‘God, can you please take away this wall,’” Sister Brigitte said. “When it finally happened, it was like a fulfillment — but at the same time it was also beyond comprehension.”

She added: “It was a miracle.”

East German border guards standing on top of the Berlin wall in front of the Brandenburg Gate on Nov. 11, 1989. (AP Photo/Lionel Cironneau, File)

“We took care of everybody in our first-aid station who was somehow injured,” remembers 84-year-old Sister Christa Huebner. “Dead or alive, cut open, fractured, everything — we made sure they received first aid and also checked whether they had to be hospitalized.”

“I saw young men jumping from the roofs on the other side into the nets of the West Berlin firefighters; other men roped down on clotheslines and came to us with their hands all bloody,” Sister Christa added.

“But there were also those who weren’t so lucky,” she added. “We took care of those who died as well.”