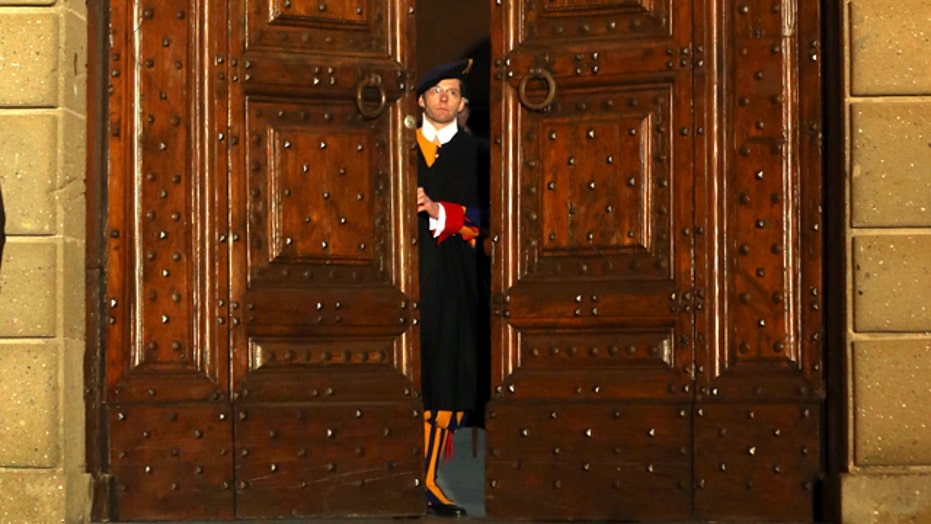 Benedict XVI has become the first pope in 600 years to resign, ending an eight-year pontificate.

The Swiss Guards standing at attention in Castel Gandolfo shut the gates of the palazzo shortly after 8 p.m. Thursday, symbolically closing the doors on a papacy whose legacy will most be marked by the way it ended -- a resignation instead of a death.

The Swiss Guards will now go off duty, their service protecting the head of the Catholic Church over -- for now.

Vatican spokesman Rev. Federico Lombardi said the guards would change into civilian clothes and return to the Vatican barracks Thursday night. They will continue to guard the entrances of Vatican City and the pope's palace, "even if he's not there," said Cpl. Urs Breitenmoser, a Swiss Guard spokesman.

Pope Benedict XVI left the Vatican for the last time as pontiff on Thursday and flew by helicopter to Castel Gandolfo, where he made his final public speech in front of a cheering crowd.

As his closest aide wept by his side, Benedict bade farewell to Vatican officials gathered in the San Damaso courtyard of the Apostolic Palace, a corps of Swiss Guards standing by at attention.

Benedict then traveled by car to the helipad on the top of the hill of the Vatican gardens and boarded a helicopter along with his secretary, Monsignor Georg Gaenswein, for the 15-minute trip to Castel Gandolfo.

Bells tolled as they took off and circled St. Peter's Square, where well-wishers held up signs saying "Thank You."

When Benedict landed in Castel Gandolfo, south of Rome, a crowd in the town's square started cheering and waving flags, chanting, "Benedetto, Benedetto" in rhythm.

His arms raised, the aging Benedict appeared at the balcony of the palazzo where he will spend the first few months of his retirement. The crowds cheering wildly, he said he was happy to be "surrounded by the beauty of creation" on this unique day.

"I am simply a pilgrim beginning the last leg of his pilgrimage on this Earth," Benedict said, as well-wishers wiped tears from their eyes.

The crowd shouted back "Long live the pope!"

"Thank you for your love and support. May you always experience the joy that comes from putting Christ at the centre of your lives."

And on Monday, the cardinals are expected to begin meeting to set the date for the conclave.

At the Vatican earlier Thursday, Benedict held his final audience with his cardinals and pledged his "unconditional reverence and obedience" to his successor, a poignant and powerful message to close out his eight-year pontificate.

In an unexpected address inside the Vatican's frescoed Clementine Hall, the pope appeared to be trying to defuse concerns about his future role and the possible conflicts arising from the peculiar situation of having both a reigning pope and a retired one.

Benedict also gave a final set of instructions to the "princes" of the church who will elect his successor, urging them to be united as they huddle to choose the 266th leader of the world's 1.2 billion Catholics.

"May the College of Cardinals work like an orchestra, where diversity -- an expression of the universal church -- always works toward a higher and harmonious agreement," he said.

It was seen as a clear reference to the deep internal divisions that have come to the fore in recent months following the leaks of sensitive Vatican documents that exposed power struggles and allegations of corruption inside the Vatican.

The audience inside the Apostolic Palace was as unique as Benedict's decision to quit, with the 85-year-old pope, wearing his crimson velvet cape and using a cane, bidding farewell to his closest advisers and the cardinals themselves bowing to kiss his fisherman's ring for the last time.

Some seemed to choke up at that moment, and a few lingered on to chat with the pope for as long as they could. But the scene seemed otherwise almost normal, with cardinals chatting on the sidelines waiting their turn to say goodbye.

Benedict said he would pray for the cardinals in coming days as they discuss the issues facing the church, the qualities needed in a new pope, and prepare to enter into the secret conclave to elect him.

"Among you is also the future pope, whom I today promise my unconditional reverence and obedience," Benedict told the cardinals.

Benedict's decision to live at the Vatican in retirement, be called "emeritus pope" and "Your Holiness" and wear the white cassock associated with the papacy has deepened concerns about the shadow he might cast over the next papacy.

But Benedict has tried to address those worries over the past two weeks, saying that once retired he would be "hidden from the world" and living a life of prayer.

In his final speech in St. Peter's Square on Wednesday, he said he wasn't returning to private life exactly, but rather to a new form of service to the church through prayer.

And on Thursday he went even further with his own public pledge of obedience to the new pontiff.

The Vatican spokesman, the Rev. Federico Lombardi, said the pope's pledge was in keeping with this effort to "explain how he intends to live this unprecedented situation of an emeritus pope."

"He has no intention of interfering in the position or the decisions or the activity of his successor," Lombardi said. "But as every member of the church, he says fully that he recognizes the authority of the supreme pastor of the church who will be elected to succeed him."

The issue of papal obedience is important for Benedict. In his last legal document, he made new provisions for cardinals to make a formal, public pledge of obedience to the new pope at his installation Mass, in addition to the private one they traditionally make inside the Sistine Chapel immediately after he is elected.

Benedict's decision to resign has been met for the most part with praise and understanding. Cardinals, Vatican officials and ordinary Catholics have rallied around him in acknowledgment of his frail state and the church's need for a strong leader.

But Cardinal George Pell of Sydney has caused a stir by openly saying the resignation has been "slightly destabilizing" for the church.

In an interview with Australian Broadcasting Corp., Pell noted that Benedict himself had acknowledged the shift in tradition; Benedict said Wednesday that he appreciated his decision was not only serious but "a novelty" for the church.

Pell also said the church was in sore need of a strong manager -- comments echoed by several cardinals who have noted the 30-year reign of two popes who paid scant attention to the internal governance of the church.

The Vatican tried to downplay Pell's comments, saying it wouldn't respond to individual cardinals and urging the media not to take advantage of churchmen who, he said, aren't necessarily media savvy.