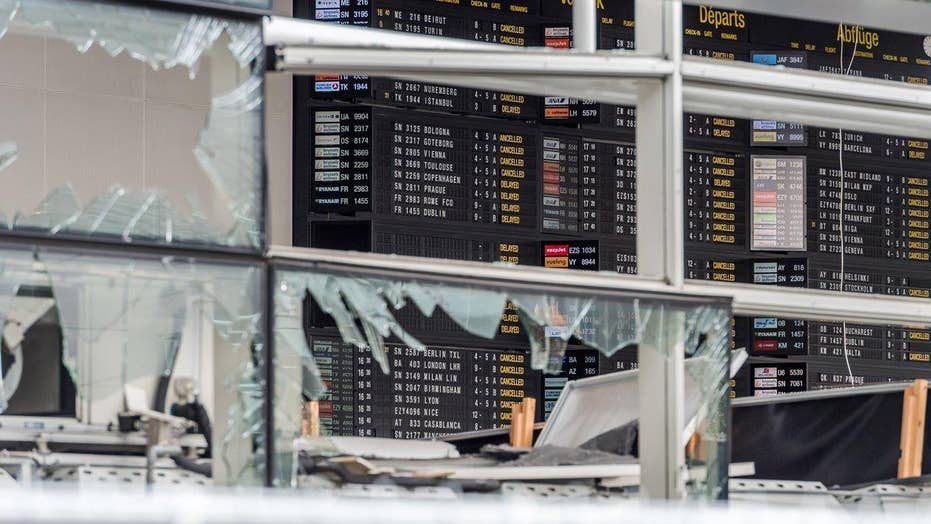 A second terrorist took part in the subway bombing Tuesday in Brussels and authorities believe he may have survived the blast, meaning there are potentially two "mystery bombers" from the twin attacks on the run, according to reports.

A Belgian police sketch of the possible second Metro bomber is being shown on local TV stations.

The development means there is an unidentified bomber in both the attack at the Maelbeek Metro station, which killed 20, and the earlier blasts at Zaventem Airport, which killed 11. Both unidentified suspects were captured by surveillance cameras with known suicide bombers.

The French newspaper Le Monde and the Belgian public broadcaster RTBF reported that a man carrying a large bag was seen on CCTV walking with Khalid El Bakraoui, whom authorities believe blew himself up on a train at the Maelbeek station. That possible accomplice also was seen talking to El Bakraoui and did not get on the train that was bombed, police sources told AFP.

- Ibrahim El Bakraoui, one of two brothers involved, is believed to be one of two suicide bombers who died at the airport.

- Najim Laachraoui, an ISIS explosives expert believed to have built the bombs used in both the Paris and Brussels attacks, was the other suicide bomber who died at the airport. He and Ibrahim El Bakraoui are believed to be the men seen in a surveillance photo pushing luggage carts and wearing solitary black gloves that may have masked detonators.

- A mystery man dressed in white, wearing a dark hat and possibly a disguise who has not been identified was also seen pushing a cart in the surveillance photo. He is believed to have placed a bomb at the airport and fled the scene. Authorities are looking for him.

- Khalid El Bakraoui, the brother of Ibrahim El Bakraoui, is believed to have died in a suicide blast at the Maelbeek Metro station 79 minutes after the airport attack.

- A second man seen with Khalid El Bakraoui and carrying a large bag at the Metro station is believed to have been an accomplice and either died in the blast or is on the run.

ISIS claimed responsibility for the attacks in Brussels, which have laid bare European security failings and prompted calls for better intelligence cooperation.

Belgian Prime Minister Charles Michel, in a national mourning speech Thursday, said the attacks targeted the "liberty of daily life" and "the liberty upon which the European project was built."

"The cries of distress, the cries of pain, the scream of sirens, the apocalyptic images will remain engraved" on memories, he said.

Security experts have told Fox News the bombers were likely targeting Americans, because the airport blast happened near the American Airlines desk, and the Metro station is near the U.S. Embassy.

Ibrahim El Bakraoui, seen in July 2015, was one of the suspected airport bombers. (AP)

In Brussels, authorities were still sifting through evidence gathered in a series of raids immediately following the attacks, which came during rush hour Tuesday morning.

According to the broadcaster, El Bakraoui referenced Mohammed Bakkali, who was arrested last November following the Paris attacks and is suspected of renting out two hideouts to the ISIS cell in Belgium. He is also accused of spying on a top Belgian nuclear official.

The known suspects in the Paris and Brussels terror attacks that are believed to be connected. (AP)

"I don't know what to do, I'm in a hurry, people are looking for me everywhere," chief prosecutor Frederic Van Leeuw quoted the message as saying. "If I give myself up I'll end up in a cell next to him."

The message points to a rising sense of panic among the three suicide bombers.

Police were drawn to the brothers' apartment Tuesday night thanks to a tip from a taxi driver who had unwittingly delivered them to the airport, Van Leeuw said. Inside the northeast Brussels residence they found an apparent bomb-making factory, including 33 pounds of homemade explosives and nails for use as shrapnel.

Neighbors told The Associated Press they had no idea of the brothers' activities and barely saw them until the taxi collected them and their visibly heavy bags Tuesday morning.

One neighbor, who was willing to give only his first name of Erdine, said he was about to drive his son to school when he saw the two men carrying their bags out of the building.

"The taxi driver tried to get the luggage," he said. "And the other guy reached for it like he was saying: 'No, I'll take it.'"