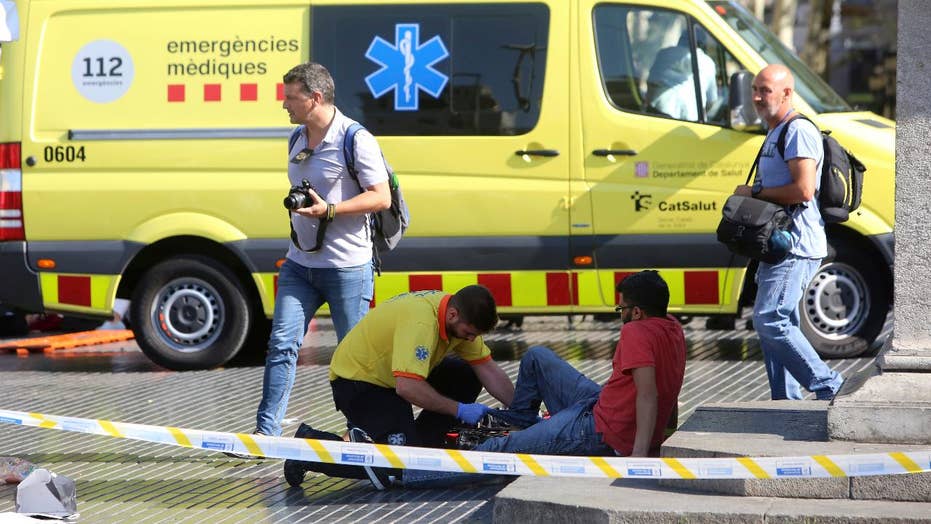 Police in Spain said a white van slammed into a crowd of pedestrians Thursday in Barcelona’s historic Las Ramblas district causing an unknown amount of casualties.

Police cordoned off the popular street, ordering stores and nearby Metro and train stations to close. Authorities have asked people to stay away from the area so as not to get in the way of emergency services.

Las Ramblas, a street of stalls and shops that cuts through the center of Barcelona, is one of the city’s top tourist destinations.

Prominent lawmakers, politicians and athletes have reacted to the latest terror attack.

Vice President Pence addressed “the horrific terror attack in Barcelona,” speaking from Panama on the final stop of a four-country tour of Latin America. “The latest scenes of carnage and mayhem sicken us all,” Pence said. “The United States stands ready to help find and punish those responsible.”

Secretary of State Rex Tillerson said the State Department is monitoring the situation but told Americans in Spain to keep away from the area where the attack occurred.

Paris’ Mayor Anne Hidalgo tweeted a few times regarding the incident showing her support for those who were affected by the incident.

Hidalgo tweeted: “Sadness and outrage at the terrorist act that has just occurred in #Barcelona. All my support for the victims and their relatives."

Spain’s Prime Minister Mariano Rajoy Brey tweeted that he was in contact with officials at the scene of the attack.

FC Barcelona, the city’s professional soccer club, tweeted that they are “saddened by the attack on our city.”

First Lady Melania Trump tweeted her "thoughts and prayers" to the victims of Barcelona.

Former President Barack Obama sent his and his wife, Michelle's, thoughts to the victims.

The State Department tweeted a message, urging U.S. citizens visiting Spain to avoid the area at the moment.

Sadiq Khan, the mayor of London, said his city stands with Barcelona against this terror attack.

Spanish tennis superstar Rafael Nadal said: "Shattered by what has happened in Barcelona! All my support for the families affected and the city."

Spanish basketball star Pau Gasol tweeted his support and said he was “horrified” by the attack.

Democratic House Minority Leader Nancy Pelosi said her thoughts are with the victims and their families.

The House of His Majesty, the King of Spain, tweeted: “They are simply criminals, assassins we are not going to terrorize. All Spain is Barcelona. Las Ramblas will be everyone’s."

Andres Iniesta, an FC Barcelona player, tweeted: “All dismayed by what has happened and the news that continue to come from our city. All my love."