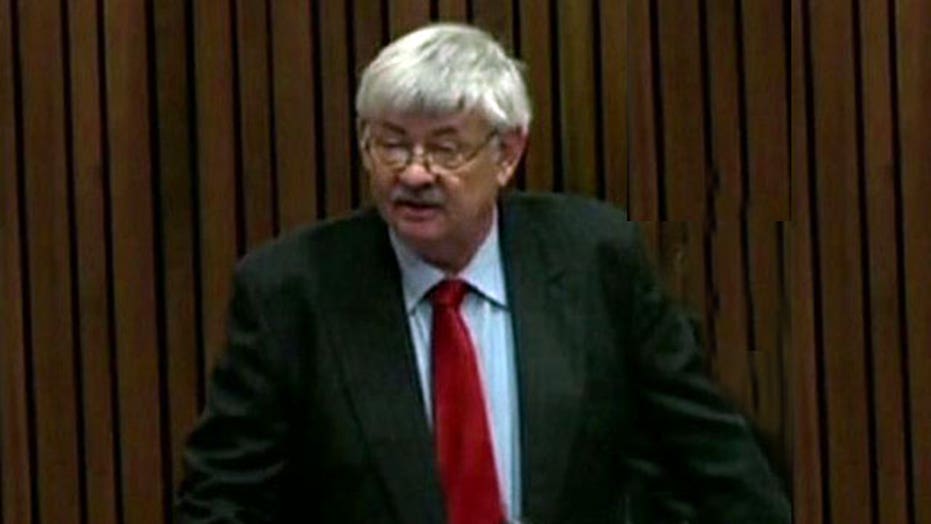 Source: Pistorius repeatedly broke down while free on bail

PRETORIA, South Africa – A ballistics expert testified Friday for the defense at the murder trial of Oscar Pistorius, saying his analysis of the scene where the Olympic athlete shot Reeva Steenkamp differs from the reconstruction of the shooting by police investigators.

The study of the sequence and trajectory of bullets that struck Steenkamp through a closed toilet door is at the center of testimony over her body position at the time of the shooting and how rapidly Pistorius fired the fatal shots with his 9 mm pistol. It also relates to the defense's contention that police investigators made mistakes.

Police say Steenkamp, a 29-year-old model and television personality, was cowering with her hands over her head when she was hit in the head by one of several bullets that struck her. But Wollie Wolmarans, a former police officer and now a private ballistics expert, testified for the defense that he did not believe Steenkamp's left hand was over her head.

The painstaking debate over detail reflects the defense's efforts to show that Steenkamp was not arguing with Pistorius after fleeing from him when she was shot in the pre-dawn hours of Feb. 14, 2013 — as the prosecution contends.

Wolmarans, who was testifying for the second day at Pistorius' trial, also said it was his opinion that the four shots were fired in "fast succession," apparently supporting Pistorius' contention that he shot rapidly and in panic after thinking there was an intruder in the cubicle.

The prosecution believes there could have been a gap between the first and the following three shots, arguing Pistorius fired with deliberate intent to kill.

Pistorius, 27, is charged with premeditated murder for Steenkamp's shooting death. He says the killing was accidental because he mistook her for a dangerous intruder about to come out of the cubicle and attack him. The double-amputee athlete held his hands over his ears at times in court when Wolmarans talked about Steenkamp's wounds.

Prosecutor Gerrie Nel argued Wolmarans' opinion about Steenkamp's position when she suffered some of the gunshot wounds didn't make sense, with Nel citing the small size of the toilet cubicle and blood and tissue spatter on a wall and the toilet lid.

Before beginning his cross-examination, Nel invited the judge and her two assessors to leave their seats and take a closer look at a reconstruction of the toilet cubicle that has stood in the courtroom for much of the trial, and where the prosecution had prepared a display Friday.

The judge was led by the hand through the courtroom by a police officer before the police's ballistics expert sprayed a substance into the reconstructed cubicle. Red laser beams became visible in the exhibit to show possible bullet trajectories. Judge Thokozile Masipa, dressed in her traditional red robe, pointed with her finger into the cubicle at one point and appeared to ask Nel a question.

Judge Masipa will deliver a verdict because South Africa does not have trial by jury. Pistorius faces 25 years to life in prison if convicted on the premeditated murder charge.