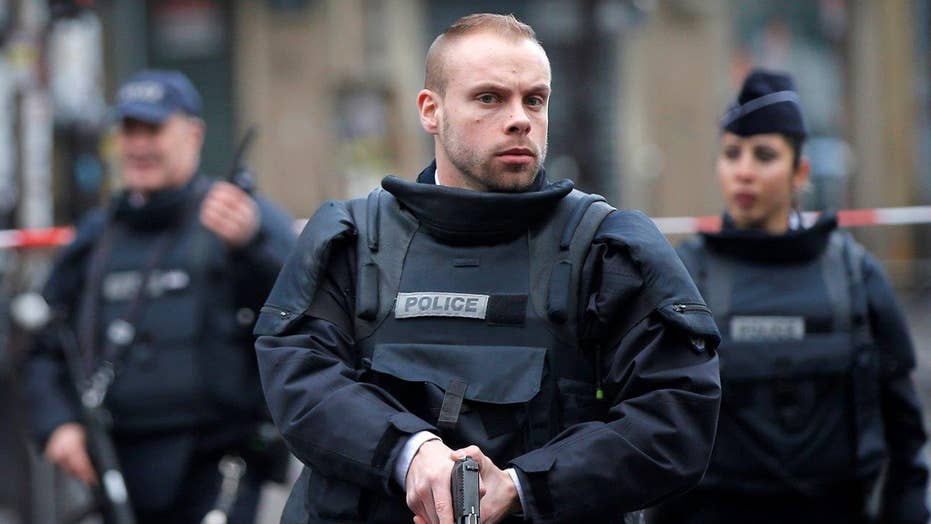 The Paris prosecutor's office announced Thursday that it was opening a terrorism investigation after police shot and killed a knife-wielding man outside a police station in northern Paris on the anniversary of the terror attack on the satirical newspaper Charlie Hebdo.

Paris prosecutors said the man's body was found with a cell phone and a piece of paper with an emblem of the Islamic State group and a claim of responsibility written in Arabic. The statement did not provide more details about the claim.

Police shot the man, who a police union official said was shouting "Allahu Akbar" as he tried to enter the police station.

Fingerprints recovered from the scene identified the man as Sallah Ali, who was convicted of theft in 2013, a source close to the investigation told AFP.

The source said investigators matched the fingerprints with those on file for the convicted thief, a homeless man who identified himself at the time as Ali, who was born in Morocco.

Alexis Mukenge, who saw the shooting from inside another building, told the network iTele that police told the man, "Stop. Move back." Mukenge said officers fired twice and the man immediately dropped to the ground.

#Barbes #Gouttedor A robot appears to be inspecting the body. pic.twitter.com/scUv9Vil8E

The Goutte d'Or neighborhood in Paris' 18th arrondissement, a
multi-ethnic district not far from the Gare du Nord train station, was locked down, as were two metro lines running through the area, though they later reopened.

Police cleared out hundreds of people who had gathered at a subway station and along nearby streets. Shops were ordered shuttered along neighboring streets, and shop owners hastily rolled down metal shutters.

Nora Borrias, who lives in the area, could not get home because of the barricades. Shaken, she said "it's like the Charlie Hebdo affair isn't over."

Pictures posted on social media showed a man in jeans and a grey jacket lying with his arms out at his sides on the pavement, yards from the entrance to the police station.

Two French officials told The Associated Press that the man had wires extending from his clothing and an explosives squad was on site. But police later said an explosive vest the man was wearing was fake.

A Paris police official said police were investigating the incident as "more likely terrorism" than a standard criminal act. The official spoke to The Associated Press on condition of anonymity because he was not authorized to be publicly named according to police policy.

Ministry spokesman Pierre-Henry Brandet told The Associated Press that at this stage of the investigation, police believe only one person was involved and are not looking for other suspects.

The attack came minutes after French President Francois Hollande warned that the threat of terrorism will continue to weigh on the country amid an ongoing state of emergency.

On Jan. 7, 2015, two French-born brothers killed 11 people inside the building where Charlie Hebdo operated, as well as a Muslim policeman outside. Over the next two days, an accomplice shot a policewoman to death and then stormed a kosher supermarket, killing four hostages. All three gunmen died.

In a speech to police forces charged with protecting the country against new attacks, Hollande said the government was passing new laws and ramping up security, but the threat remained high.

Hollande especially called for better surveillance of "radicalized" citizens who have joined ISIS or other militant groups in Syria and Iraq when they return to France.

"We must be able to force these people --and only these people-- to fulfill certain obligations and if necessary to put them under house arrest ... because they are dangerous," he said.

Following the January attacks, the government announced it planned to give police better equipment and to hire more intelligence agents.

France has been on high alert ever since, and was struck again Nov. 13 in a series of coordinated attacks by ISIS extremists that killed 130 people.

Survivors of the January attacks, meanwhile, are continuing to speak out.

Cartoonist Laurent Sourisseau, the editor-in-chief of Charlie Hebdo, who is known as Riss, told France Inter radio "security is a new expense for the newspaper budget."

"This past year we've had to invest nearly 2 million euros to secure our office, which is an enormous sum," he said. "We have to spend hundreds of thousands on surveillance of our offices, which wasn't previously in Charlie's budget, but we had an obligation so that employees feel safe and can work safely."