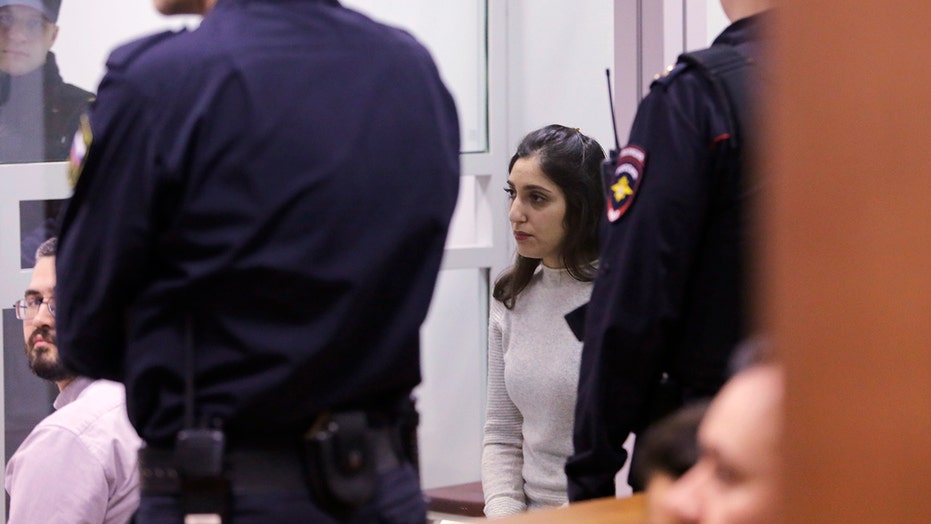 A Russian court reportedly rejected the appeal on Thursday of a 26-year-old woman with dual American and Israeli citizenship who has been jailed in Russia since April after authorities allegedly found nine grams of cannabis in her luggage.

In October, Naama Issachar was sentenced to seven and a half years in prison for a charge of smuggling drugs, her sister, Liad Gold, told Fox News at the time.

At the same time the Russian court rejected Issachar’s appeal on Thursday, Russian and Israeli diplomats held a meeting in Jerusalem to discuss her situation, as well as a recent increase in Israelis who have been detained at airports, The Jerusalem Post reported.

Israeli woman Naama Issachar, center, sits inside a cage during appeal hearings in a courtroom in Moscow, Russia, Thursday, Dec. 19, 2019. Naama was sentenced in October to seven and a half years in prison for drug smuggling after authorities in April found nine grams of marijuana in her luggage.  (AP Photo/Alexander Zemlianichenko Jr.)

Issachar, who was born and raised in Fair Lawn, N.J., and moved to Israel when she was 16, was returning home April 9 after a three-month trip to India, according to Gold. Issachar, who has served in the Israeli army, was stopped by police at the Moscow airport as she boarded her connecting flight to Tel Aviv, brought into an interrogation room and was told cannabis had been found in her checked bag.

Issachar said she accidentally left the cannabis in her bag, her sister told Fox News. The 26-year-old was initially charged with cannabis possession, but the charge was upgraded in May to smuggling drugs into Russia.

Gold said her sister denied the smuggling charge and Issachar’s lawyers have reportedly said that the sentence is much harsher than the usual charges for such a small amount of cannabis.

Israeli Naama Issachar gestures during an appeal hearing in a courtroom in Moscow, Russia, Thursday, Dec. 19, 2019. An Israeli backpacker serving prison time in Russia on a drug conviction is appealing her case and says she was wasn't provided a translator or lawyer after being detained at a Moscow airport.  (AP)

“I think the punishment doesn’t fit the crime. I think it’s extreme and inhumane and she’s more than paid the price for what she did,” Gold told Fox News in October, reacting to her sister’s sentencing.

Netanyahu called Issachar's mother and said that "despite the disappointment in the court's decision, I am not giving up. I will continue acting in every way to bring Naama home," according to the Jerusalem Post.

AMERICAN-BORN ISRAELI WOMAN, 25, DETAINED IN RUSSIA FOR 4 MONTHS OVER 9 GRAMS OF CANNABIS

Sitting inside a cage during appeal hearings in a courtroom in Moscow on Thursday, Issachar reportedly said, “I didn’t buy hashish and I didn’t put it in my bag. I said several times that it is not mine… No one asked if the drugs are mine during the investigation or after.”

Issachar noted that she was just in Russia for a layover, therefore, it is impossible that her intention was to smuggle drugs into the country, The Post reported.

“I beg the judges to understand that I am in prison for almost nine months, isolated from people who speak my language. This conviction will ruin my life over a crime I did not commit,” the paper reported Issachar said.

Issachar's lawyer reportedly said the ruling is based on an illegal forced confession and that the court is quoting statements she never made. Issachar said she was wasn't provided a translator or lawyer after being detained at a Moscow airport.

Gold told Fox News she was not immediately commenting on Thursday’s developments, however in October, following Issachar’s sentencing, Gold said that her family will never stop fighting for her sister’s release.