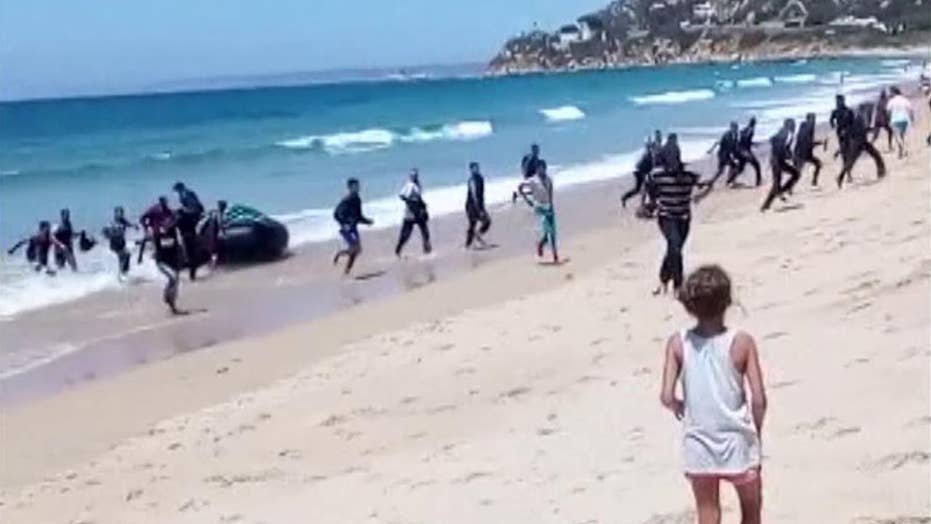 Raw video: Rubber boat packed with dozens of migrants washes up on beach in Cadiz

About two dozen people suspected of being migrants from Africa surprised sunbathers in Spain on Wednesday when they came ashore and jumped off of an inflatable boat.

The migrants were captured on video on a black inflatable boat coming ashore in Cadiz, on the southern Spanish coast. As the boat pulls into shallow water, those onboard leapt out and ran toward the shore.

One onlooker asks in an astonished voice: "What's going on?"

Carlos Sanz, who shot the video while on vacation in Cadiz, said the group quickly vanished and police arrived some time later.

Beachgoers watched as around two dozen suspected migrants scattering on the beach in Cadiz, Spain. (Carlos Sanz via AP)

Disembarkations by migrants on Spanish beaches aren't common but have happened before, especially in cities with African enclaves like Melilla and Ceuta, which border Morocco.

Thursday morning, about 700 migrants tried to storm the border crossing between Spain's North African enclave of Ceuta and Morocco. None of them managed to make it across.