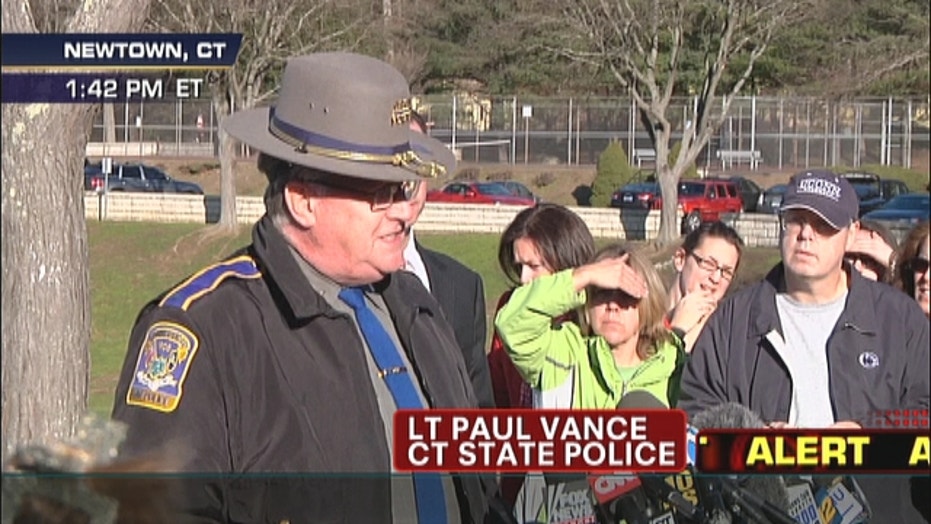 Connecticut police holds a press conference on deadly shooting at an elementary school.

NEWTOWN, Conn. – A shooter at a Connecticut elementary school that left 27 people dead, including 20 children, was identified as 20-year-old Adam Lanza.

A law enforcement official in Washington said Lanza's mother, Nancy Lanza, was a teacher at the school. She was apparently killed by her son, who also died at the scene, apparently from a self-inflicted gunshot wound.

Adam's brother, 24-year-old Ryan of Hoboken, N.J., is being questioned.

According to a second official, the suspect drove to the scene of the shootings in his mother's car. Three guns were found at the scene — a Glock and a Sig Sauer, both pistols — and a .223-caliber rifle. The rifle was recovered from the back of a car at the school. The two pistols were recovered from inside the school.

The official also said Lanza's girlfriend and another friend are missing in New Jersey.

The killings happened at Sandy Hook Elementary School in Newtown, about 60 miles northeast of New York City. The town is more than 90 percent white and five percent Latino, according to the U.S. Census.

The shooting is the latest mass violent incident in a year that in recent days saw a deadly mall shooting in Oregon, and months ago a gunman opened fire in a suburban Colorado movie theater that killed about a dozen. Both gunmen are in their 20's. The Oregon shooter killed himself after killing two other people.

State police say Newton police called them around 9:40 a.m. A SWAT team was among the throngs of police to respond.

"The scene is secure, the situation is secure," said Connecticut State Police Lt. Paul Vance. "The public is not in danger."

Photos from the scene showed young students — some crying, others looking visibly frightened — being escorted by adults through a parking lot in a line, hands on each other's shoulders.

President Obama was notified around 10:30 in the morning.

"I would rather not relay reactions at this point because I don't have any confirmation to give to you about exactly what has happened or potential victims," said White House Press Secreatry Jay Carney. "The president is a father... he feel's enormous sympathy for families that are affected and to do everything we can to support state and local law enforcement and those enduring what appears to be very tragic event."

Stephen Delgiadice said his 8-year-old daughter heard two big bangs and teachers told her to get in a corner. His daughter was fine.

"It's alarming, especially in Newtown, Connecticut, which we always thought was the safest place in America," he said.

A dispatcher at the Newtown Volunteer Ambulance Corps said a teacher had been shot in the foot and taken to Danbury Hospital. Andrea Rynn, a spokeswoman at the hospital, said it had three patients from the school but she did not have information on the extent or nature of their injuries.

Mergim Bajraliu, 17, heard the gunshots echo from his home and raced to check on his 9-year-old sister at the school. He said his sister, who was fine, heard a scream come over the intercom at one point. He said teachers were shaking and crying as they came out of the building.

"Everyone was just traumatized," he said.

Richard Wilford's 7-year-old son, Richie, is in the second grade at the school. His son told him that he heard a noise that "sounded like what he described as cans falling."

The boy told him a teacher went out to check on the noise, came back in, locked the door and had the kids huddle up in the corner until police arrived.

"There's no words," Wilford said. "It's sheer terror, a sense of imminent danger, to get to your child and be there to protect him."