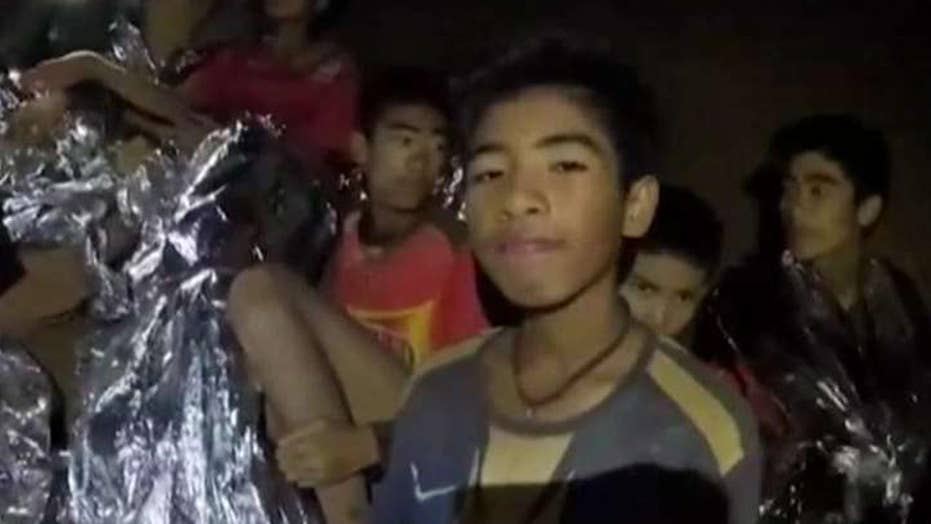 Four members of a Thai youth soccer team were rescued from a cave in northern Thailand on Sunday, leaving another eight boys and their soccer coach in the flooded cavern after 18 divers began a daring mission to bring home the group who have been trapped in the flooded cavern for more than two weeks.

They were taken to the hospital — three by helicopter and one by ambulance — once they were out of the cave.

The conditions of the boys were not released, but the head of joint command center coordinating the search said he met with the children and described them as being in “perfect” health and called today’s mission the “best situation.”

One of two ambulances leave the cave in northern Thailand hours after operation began to rescue the trapped youth soccer players and their coach. (AP)

"The operation went much better than expected," Narongsak said about the rescue, which began at 10 a.m. Sunday local time.

Officials estimated the first phase of the rescue would take 12 hours, giving the divers six hours into the cave and back.

The 12 boys and soccer coach have been trapped in the northern Thailand cave for more than two weeks. (AP)

The next phase of the rescue operation to free the eight boys and their 25-year-old soccer coach will begin in 10 to 20 hours to allow divers to replenish oxygen supplies and evaluate the plan in place.

Rain may also delay the second phase. Heavy rain was soaking northern Thailand Sunday night after officials announced the mission was halted for the night. Incoming monsoon rains had been a concern because it could once again flood the cave and deplete oxygen levels.

A group of 18 divers — 13 foreign and five Thai — began the operation to bring the boys, ages 11-16, and their 25-year-old coach out of the Tham Luang Nang Non cave in Chiang Rai province after the area saw mild weather and falling water levels in the cave. Ambulances and helicopters were on standby Sunday at the cave site to take anyone rescued from the cave to a hospital.

“Today is a D-Day for our operation,” Narongsak said Saturday.

"I confirm that we are at war with water and time from the first day up to today," Narongsak added. "Finding the boys doesn't mean we've finished our mission. It is only a small battle we've won, but the war has not ended. The war ends when we win all three battles — the battles to search, rescue and send them home."

The start of the rescue mission brought in a sense of optimism over people in Thailand. In total, more than 50 international divers and 40 Thai divers have taken part of the rescue operation. Rescuers part of the Thai navy SEAL partaking in the operation posted on Facebook showing hands locked with a caption vowing to bring the boys home.

Eighteen divers entered the cave to rescue the 12 boys and their soccer coach on Sunday. (Thai Navy SEAL)

"We, the Thai team and the international team, will bring the Wild Boars home,” referencing the boys’ soccer team name.

Though four boys have been rescued as of Sunday night, the mission to extract the rest could take two to four days depending on the conditions in the cave. The acting Chiang Rai governor had said rescuers couldn’t wait for perfect weather conditions because of several factors.

The boys and their coach became stranded when they went exploring in the cave after a practice game June 23. Monsoon flooding cut off their escape and prevented rescuers from finding them for almost 10 days.

The divers began the operation at 10 a.m. Sunday local time to bring the boys, ages 11-16, and their 25-year-old coach out of the Tham Luang Nang Non cave in Chiang Rai province.

The Thai Navy said Saturday three navy SEALs, one a doctor, were with the boys and coach. The 13 were having health evaluations and rehabilitation, and were being taught diving skills. Food, electrolyte drinks, drinking water, medicine and oxygen canisters have been delivered to them.

In letters written by the boys released Saturday, the boys appeared calm and reassured their families they were “fine.”

Rescuers have been working to drain the cave enough to bring the boys out. (AP)

"Don't be worried, I miss everyone. Grandpa, Uncle, Mom, Dad and siblings, I love you all. I'm happy being here inside, the navy SEALs have taken good care. Love you all," wrote one of the boys named Mick.

President Trump tweeted the U.S. is "working very closely" with the Thai government during the rescue mission.

"The U.S. is working very closely with the Government of Thailand to help get all of the children out of the cave and to safety. Very brave and talented people!" Trump tweeted.

Fox News’ Jeff Paul in Mae Sai, Thailand, and The Associated Press contributed to this report.