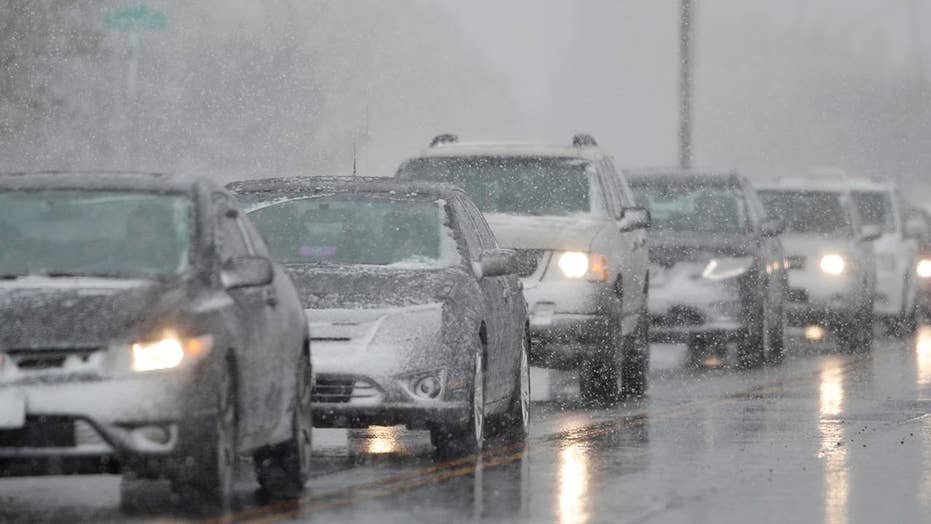 The fierce winds and heavy snow that can immobilize a region during a blizzard also can lead to some of the most deadly storms.

According to the NWS, a blizzard is defined as sustained winds or frequent gusts of 35 mph or more, and snow and blowing snow that reduce visibility to less than a quarter of a mile for three hours or more.

Here are some of the deadliest blizzards in record:

The Superstorm of 1993 dubbed the "Storm of the Century" was one of the most intense storms ever recorded in the Eastern U.S.

The storm system bore down on half the U.S. from March 12 to 14 causing $5.5 billion in damage and killing more than 270 people in 13 different states.

"With a central pressure usually found only in Category 3 hurricanes, the storm spawned tornadoes and left coastal flooding, crippling snow, and bone-chilling cold in its wake," according to the National Oceanic and Atmospheric Administration's National Centers for Environmental Information.

Snow totals reached up to 56 inches in Mount LeConte, Tenn., while a width swath of 1 to 2 feet of snow was reported across the eastern seaboard.

"In terms of human impact, the Superstorm of 1993 was more significant than most landfalling hurricanes or tornado outbreaks, and ranks among the deadliest and most costly weather events of the 20th century," according to the NWS.

A pair of blizzards during the winter of 1888 created brutal and deadly conditions spanning the country.

One of the storms struck the Northern Plains on Jan. 12, 1888, as a mild day that melted earlier snow quickly changed. Temperatures dropped as low as 40 degrees below zero in a matter of hours. Fierce winds up to 60 mph created an ensuing whiteout dubbed "The Children's Blizzard" due to the many children who died walking home from school.

"A contributing factor to the death toll was the poor construction of many homes and schoolhouses built as the upper Midwest was experiencing a pioneer boom," according to the NWS.

Between 250 and 500 people perished in that storm.

Just a few months later, another storm dubbed the "Great Blizzard of 1888" struck the Northeast over several days, dropping between 40 to 50 inches of snow and creating snow drifts 30 to 40 feet deep.

"The storm cut off and immobilized East Coast cities, crippling transportation and affecting one quarter of the U.S. population," the NWS notes.

More than 400 people died in that storm, including 200 in New York City. Many workers still went to work regardless of the weather, leaving many stranded or to freeze to death, according to the NWS.

More than 900 people were killed in a series of blizzards and bitter weather that slammed Afghanistan in the winter of 2008. Temperatures dropped to -22 degrees Fahrenheit as nearly 6 feet of snow fell in one of the harshest winters ever at the time.

An Afghan woman slips on the snow on a street in Kabul on Feb. 6, 2008 as a series of snowstorms and bitter cold gripped the country. (MASSOUD HOSSAINI/AFP via Getty Images)

Afghanistan is largely mountainous and many people live in remote villages reachable only by foot. It's one of the poorest countries in the world, and most people live in mud and thatch homes heated by burning wood, coal or dung.

In addition to people killed in the snow, officials told The Associated Press at the time that more than 100,000 sheep and goats also perished.

Carolean Death March in 1719 between Sweden and Norway, at least 3,000 deaths

Around 3,000 men froze to death when a blizzard hit during what is called the "Carolean Death March."

A monument in Duved, Sweden for the "Carolean Death March."

The storm struck as Swedish soldiers named for kings Carl XI and Carl XII were retreating after an unsuccessful offensive in Norway. The group was trapped in the mountains while heading back to Sweden, according to VICE News.

Over the next two days, 3,000 would die as well as their horses. A monument in Duved, Sweden, memorializes those who perished.

At least 4,000 people were killed when a series of blizzards crippled Iran for six days in February 1972, leaving people buried in some places.

While parts of northern and central Iran saw upward of 10 feet of snow, some locations in the southern part of the country had 26 feet.

Temperatures that dropped to -13 degrees Fahrenheit made the situation worse as many were left without water, food, heat and medical aid for days.