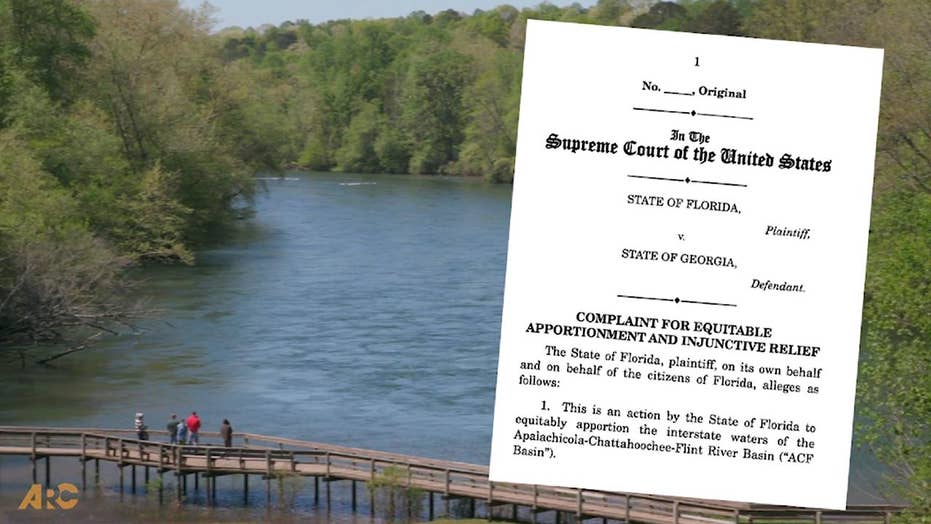 Georgia and Florida water dispute heads to the US Supreme Court

Florida officials say their state is not getting fair usage of the water supply.

PEBBLE CITY, Ga. — For three decades, Florida and Georgia have been entangled in a legal battle over the Apalachicola Basin, with Florida claiming it is not getting a fair usage of the water supply.

As a result, officials in the Sunshine State want to put a cap on Georgia’s water usage, a cap that could potentially harm their farming industry.

Last month a federal judge ruled in Georgia’s favor — and now the battle is headed to the U.S. Supreme Court.

The livelihood of millions of people depend on the Apalachicola Basin, which includes a collection of three rivers that flow through Georgia, Alabama, and into Florida.

“We’re all sort of in this basket together,” farmer Murray Campbell told Fox News.

The ACF river basin is comprised of three rivers including the Apalachicola River, Chattahoochee River, and Flint River.

Campbell, who has grown peanuts and cotton for more than three decades in Georgia, said he is worried that the dispute over how much water flows downriver will harm the viability of his family's farm.

“It would be decimating, if we were cut off. It would literally be a dust ball,” he said.

Farmer Murray Campbell stands on his farm, which pumps about 8-10 inches of water per acre in a growing season.

Campbell’s farm sits on more than 300 acres. With so much land, he uses technological tools to help monitor his water usage.

“My daddy, my granddaddy, they didn’t create cover crops to reduce the water,” he said. "They didn’t put on low pressures on the pivots, we’re using the technology available with the sensing units so that we don’t overuse."

“Since 2000, metro Atlanta has grown by 1.3 million people and yet we withdraw 10 percent less water,” Katherine Zitsch told Fox News.

Zitsch works as the manager of natural resources at the Atlanta Regional Commission. She says Georgia is working to conserve water by charging residents more for the water they use.

“We don’t have an alternate source, making sure that we have access to it is critical to (the) economy,” she added.

The Florida Department of Environmental Protection released a statement saying the water the basin provides is essential and they "remain steadfast" in their commitment to protect it.

“It’s concerning to us from a standpoint of wanting to make sure we have the water to do what we need to do, to make a good crop and provide for our families,” Campbell said.