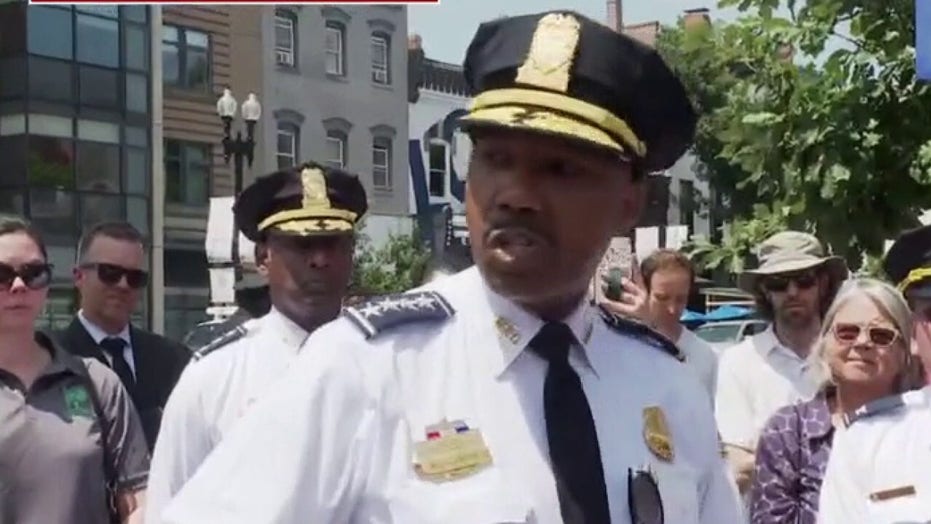 Washington police chief Robert Contee shows his frustration as he reacts to Thursday's shooting in a pedestrian-heavy area of the city.

The number of homicides in Washington, D.C., surpassed coronavirus deaths in the city by a nearly 3-to-1 ratio in July as the nation’s capital continues to grapple with an uptick in murders.

There were 21 homicides throughout the month compared to eight coronavirus deaths, according to FOX5 DC.

"We've put a lot of resources and time into the COVID pandemic," Trayon White, the councilman of Ward 8, said following the July 16 killing of 6-year-old Nyiah Courtney in his area, according to the station. "We're in a pandemic right now when it comes to crime in this community and we got to start acting it."

Police in Washington, D.C., have made an arrest in connection to the death of 6-year-old Nyiah Courtney, who was killed while riding her scooter in a mass shooting that also left her mother wounded in July.   (DC Police Department/Twitter)

The statistic comes as Washington, D.C., recorded 100 homicides by July 10 – the earliest the city has hit that number since 2003.

The D.C. Police Union claimed the average date over the past 10 years when the city usually hits 100 homicides is Oct. 25.

As of July 30, there were 113 homicides in Washington, D.C., this year to date, compared to 108 last year, data from the Metropolitan Police Department shows.

Fox News has reached out to the MPD and D.C. Mayor Muriel Bowser’s office for comment.

A double shooting on Saturday – the last day of July – killed Kervin Sanches, a 31-year-old teacher and father of four, according to FOX5 DC. Another man was injured.

His fiancée, Patrice, reportedly said they were planning a wedding for October and had just bought their first home in D.C.

Sanches worked at the Imagine Hope Community Charter School. As of Monday morning, no arrests have been made in the case, the station reported.

"In addition to just recently losing my friend, I have two students, one who I formerly coached who just graduated from high school that was recently hospitalized due to being shot in broad daylight in Northwest DC. And then another young man who I currently coach who was shot, maybe a week or so ago, and injured," Marvin Moore, a friend of Sanches, told FOX5 DC.