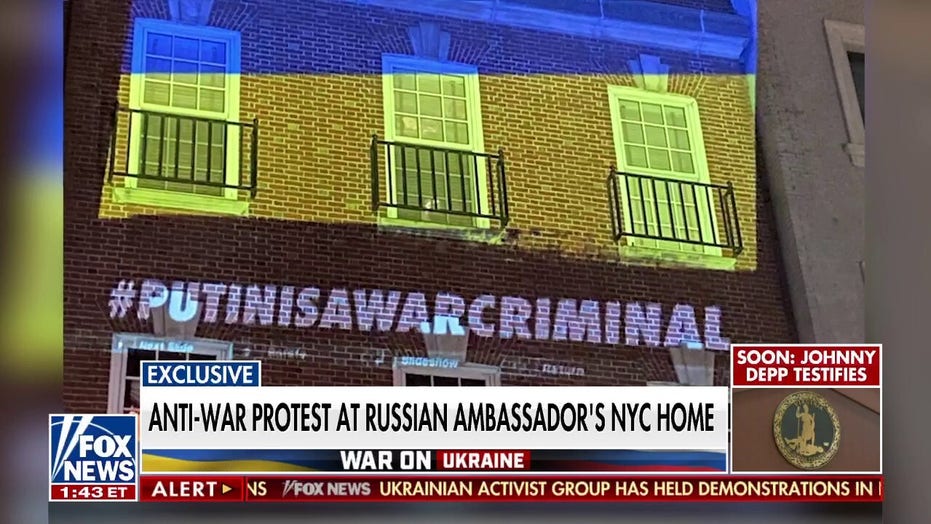 NEW YORK CITY – Vladimir Putin's war on Ukraine arrived on the doorstep of the Russian ambassador to the United Nations.

A Ukrainian activist group defiantly bathed his Manhattan townhouse in the blue and yellow colors of the Ukrainian flag and anti-Vladimir Putin slogans as a protest against Putin's horrific assault on the Ukrainian people.

"The message is to show that Ukrainians are not afraid and will find any Russian official, even if they are trying to hide," Arthur Zgurov told Fox News.

A Ukrainian activist group projected the colors of the Ukrainian flag and anti-Vladimir Putin slogans onto the Manhattan townhouse of the Russian ambassador to the United Nations. (Fox News)

Zgurov, a Ukrainian neurosurgeon, is now a New York-based activist with the pro-Ukrainian group Razom For Ukraine.

The group projected the Ukrainian flag on the front facade of the red brick Georgian style mansion on the Upper East Side of Manhattan that is the official residence of Russian U.N. Ambassador Vassily Nebenzia.

The phrases "#PUTINISAWARCRIMINAL" and "#ZELENSKYISAHERO" were also projected onto the mansion's exterior just after Nebenzia arrived. He remained inside, in the third-floor library.

"The message to Nebenzia would be, Mr. Nebenzia, stop lying. You lie too much. And too many things have happened because of your lies. Be the man and speak out." said Zgurov.

Razom For Ukraine provides medical supplies and assistance to the besieged Ukrainian people and has held demonstrations in New York City against the war. More than one dozen of its members gathered across the street from the townhouse on East 75th Street on Tuesday night, and used a hand-held projector to light up the building.

RUSSIA ACCESSES BIDEN OF HAVING DEMENTIA

"I am very glad that we came to his house, because he is one of the most evil spreaders of propaganda," said Razom member Irina Paliashvili about Putin's ambassador. Paliashvili, an American and Ukrainian-based lawyer, was able to leave Kyiv just as the war started.

"He represents an evil regime and he promotes an evil regime, so he himself is evil," she said. "I think it is crucial that these people understand they are watched by the world, that they cannot get away with this criminal barbaric war that they wage against Ukraine."

Nebenzia has been branded as "Putin's Puppet" by critics for his loyal defense of the invasion and continued denials at the U.N. Security Council meetings on Russian atrocities, war crimes and crimes against humanity. He branded the killings of citizens in Bucha as "as staged provocation" and "a false flag attack." He has continued to blame Ukraine President Volodymry Zelenskyy and Ukrainians for starting the war. He has used the Russian veto in the Security Council to block a resolution that criticizes his government as he continues to push Putin's propaganda. Razom For Ukraine is also calling for Russia to be expelled from the Security Council because of its crimes.

Zgurov has wrestled with the images from his home country that are caused by Putin and his government and he cannot come to terms with the mass destruction and killing.

"If those were aliens who would do that, I can understand. But when humans do the same thing to humans, that is just despicable, disgusting. And I cannot find the words that I am allowed to say to express my feelings."

Fox News has seen Nebenzia at the government residence. He did not emerge from the townhouse during the Razom protest, but arrived shortly before it began.

UKRAINIANS DESCRIBE HORRORS OF LIVING UNDER RUSSIAN OCCUPATION: ‘ARE YOU NOT EVEN HUMAN BEINGS?’

The ambassador is chauffeured to and from work by his driver in a late model black Mercedes. Fox News has also seen a chef deliver daily food and supplies in a minivan with Russian diplomatic plates and a housekeeper and other staff enter and exit the building. A sleek Ducati motorcycle has at times been parked behind its locked gate. While previous pro-Ukraine street demonstrations have targeted the Russian U.N. mission office complex on nearby East 67th Street and a Russian diplomatic apartment building in the Riverdale section of the Bronx, this is the first time that message was brought directly to the ambassador's house.

Moscow bought the elegant mansion in the exclusive neighborhood for $35 million in 2008. The real-estate history blog "DaytonianinManhattan" reported that the building dated to 1892 and was once owned by a descendant of a signer of the Declaration of Independence. In 1915 the mansion became known as the R. Horace Gallatin house, after its patrician owner, who was a descendant of Elbridge Gerry, a founding father who not only signed the Declaration of Independence but also later served as President James Madison's vice president. Gallatin was also the great-grandson of Albert Gallatin, who served as treasury secretary under Presidents Madison and Thomas Jefferson, and was a U.S. senator and congressman from Pennsylvania. Albert Gallatin was sent to St. Petersburg, Russia, in 1813 to negotiate an end to the War of 1812.

There are no outward signs that the mansion is the official residence of the Russian ambassador. Unlike other foreign government properties in Manhattan, there is no flag indicating what country the building belongs to, no brass plaque with the nation's name on it, and even the pair of standard "No Standing" parking signs flanking either side of the building's front curb are not the usual "Diplomatic" parking zone signs that would prevent ordinary New Yorkers from parking there. Observers believe this was all done to conceal the true identity of the home's resident.

People watch as a Ukrainian activist group defiantly bathed the Manhattan townhouse of Russia's U.N. ambassador in the blue and yellow colors of the Ukrainian flag. (Fox News)

Similar protests supporting Ukraine have been staged around the globe at other Russian government properties.

In London, a group of journalists projected the Ukrainian flag onto the Russian Embassy to protest the killings of reporters covering the war.

In Lisbon, pro-Ukraine activists did the same, shining the Ukrainian flag on the front of the Russian Embassy to Portugal.

In Washington, D.C., a large Ukrainian flag was unfurled in front of the Russian embassy and an image of the flag was projected onto that building.

In Lithuania, protesters dyed the small lake in front if the Russian embassy in Vilnius red, naming it the "Lake of blood." An Olympic swimmer swam through the red-colored water and others floated in it to represent the dead Ukrainian civilians who have fallen victim to Putin's horrors.

"Putin is a killer war criminal, everybody knows that," Zgurov said. "Zelenskyy is a hero. Our president is indeed a hero."

Paliashvili called Putin "a war criminal" who is "probably something very close to Hitler and to the Nazi regime."

As the members of Razom For Ukraine wrapped up their silent protest, they quietly sang the Ukrainian national anthem. As their voices filled the soft Manhattan night, they all suddenly shouted  "Slava Ukraini!" for "Glory to Ukraine!" several times.

There was no response from anyone inside the mansion.