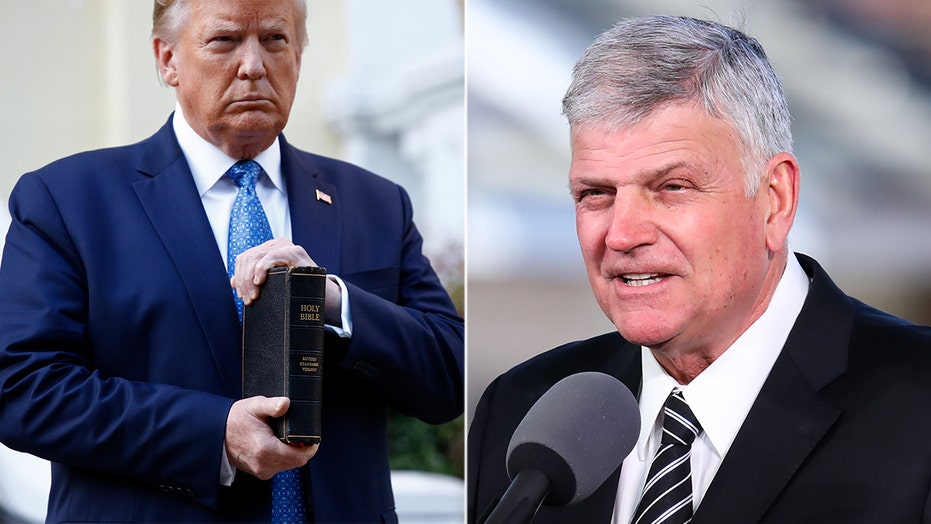 Trump responds to criticism over St. John's trip: 'It was a great symbol'

President Trump's surprise walk to St. John's Church Monday night was condemned by Democratic leaders and clergy in Washington, but praised by his most prominent evangelical supporter.

Evangelist Franklin Graham was asked how he felt after the Episcopal Bishop of Washington, the Right Rev. Mariann Budde, accused the president of using the Bible and "one of the churches of my diocese, without permission, as a backdrop for a message antithetical to the teachings of Jesus."

The son of the late Rev. Billy Graham said he was encouraged, not offended, by the president holding up a Bible.

President Trump holds a Bible as he visits outside St. John's Church across Lafayette Park from the White House June 1, in Washington. (AP Photo/Patrick Semansky)

"Offended? Not at all," Graham, the president and CEO of Samaritan's Purse, wrote in a lengthy Facebook post, saying Trump "made an important statement that what took place the night before in the burning, looting, and vandalism of the nation’s capital—including this historic house of worship—mattered, and that the lawlessness had to end."

“They didn’t use tear gas,” Trump told the "Brian Kilmeade Show" Wednesday. “Now, when I went, I didn’t say ‘Oh, move them out.’ I didn’t know who was there.”

USPP said they cleared protesters because they attacked cops, not because of Trump's visit.

"I’m disappointed that some of the President’s harshest critics about going to the church were clergy," Graham said.

The evangelical leader called it "unbelievable" that religious leaders would attack the president for holding up "God's word" in a time of unrest across the nation.

"They should be thanking him rather than criticizing him! They are nitpicking his gesture, also saying he should have prayed while he was there. So critical," Graham said. "Well, maybe they should invite him back and pray for him as he leads this country through a very difficult time in our history."

The North Carolina-based Christian leader called on all pastors to "join hands and join hearts in praying for our nation, that God would give wisdom to our leaders - our mayors, our governors, our President Donald J. Trump, and also our law enforcement. The God of the Bible is our only hope."

Former Vice President Joe Biden took a shot at Trump during a speech in Philadelphia Tuesday.

"I just wish he opened it every once in a while instead of just brandishing it," the presumptive Democratic presidential nominee said. "If he opened it, he could have learned something."

House Speaker Nancy Pelosi, taking photos with a Bible at a Capitol Hill press conference, criticized Trump and referred to Ecclesiastes, as well as notes in her Bible.

Trump won 81 percent of the white evangelical vote in the 2016 election and exit polls found that white Catholics supported him over Hillary Clinton, 60 percent to 37 percent. According to recent polls, his support has remained steady in those voting blocs.