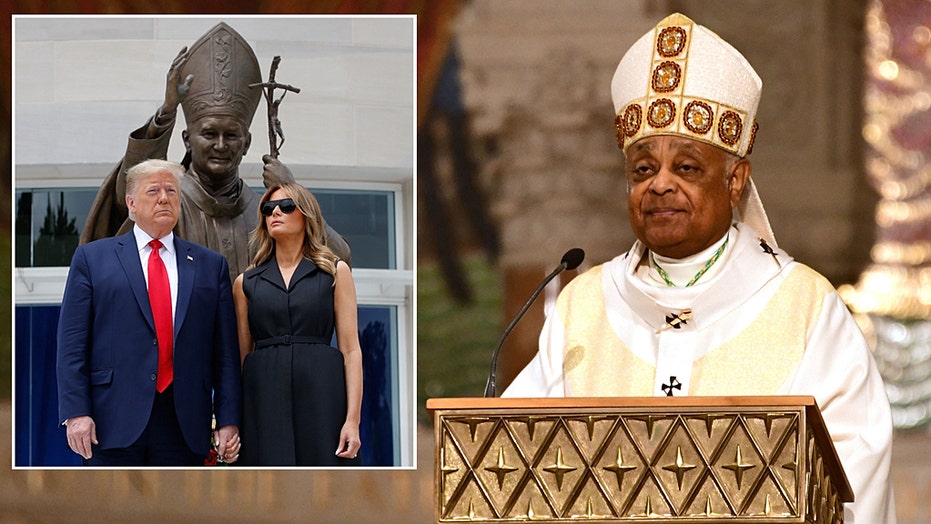 President Trump under fire for treatment of White House protesters

Top Democrats accuse President Trump of fanning the flames of discord; reaction and analysis on 'The Five.'

The Washington archbishop is facing backlash from Catholics for his scathing condemnation of President Trump's visit to the Saint John Paul II National Shrine, coinciding with an international religious liberty executive order Tuesday.

Wilton Gregory opposed the long-planned visit by Trump and first lady Melania Trump, who is Catholic.

"I find it baffling and reprehensible that any Catholic facility would allow itself to be so egregiously misused and manipulated in a fashion that violates our religious principles, which call us to defend the rights of all people even those with whom we might disagree,” the archbishop said in a statement.

“Saint Pope John Paul II was an ardent defender of the rights and dignity of human beings. His legacy bears vivid witness to that truth," Gregory added. "He certainly would not condone the use of tear gas and other deterrents to silence, scatter or intimidate them for a photo opportunity in front of a place of worship and peace.”

The archbishop was referring to Trump's Monday night surprise walk from the White House to St. John's Episcopal Church, amid the protests following Floyd’s death. Trump held up a Bible and posed for a photo. Prior to his visit -- and a mandated curfew in the city -- police officers took steps to remove protesters from Lafayette Park.

Brian Burch, the president of CatholicVote, a political Catholic organization, said Trump's visit to the shrine and executive order should be "celebrated" by those who love the church and religious freedom.

"It is regrettable that the Archbishop of Washington chose this occasion to engage in a partisan attack on the President, especially when the country is in desperate need of healing and unity," Burch said in a statement provided to Fox News.

He said millions of Catholics are grateful for the action Trump took.

It is regrettable that the Archbishop of Washington chose this occasion to engage in a partisan attack on the President, especially when the country is in desperate need of healing and unity.

"The protection of religious minorities is a bipartisan issue that has enjoyed unanimous support in Congress as well as the Trump and Obama administrations," Burch added. "Today’s unfortunate partisan attack needlessly politicizes this important issue, and distracts from the plight of vulnerable religious minorities around the world.”

President Donald Trump holds a Bible as he visits St. John's Church across Lafayette Park from the White House June 1, in Washington. Part of the church was set on fire during protests on Sunday night. (AP Photo/Patrick Semansky)

Edward N. Peters, a Roman Catholic canonist and professor at Sacred Heart Major Seminary of the Archdiocese of Detroit, tweeted that Gregory's condemnation is "devoid of any sense of Christian sentiment."

Dwight Longenecker, a Catholic priest, shared an image of Gregory with House Speaker Nancy Pelosi with the caption: "I find it baffling and reprehensible that any Catholic facility would allow itself to be so egregiously misused and manipulated."

Others noted Trump, who is not Catholic, had the trip planned for some time, but came on the heels of his surprise visit to St. John's Monday night.

The Episcopal Bishop of Washington, the Right Reverend Mariann Budde, said: "The president just used a Bible, the most sacred text of the Judeo-Christian tradition, and one of the churches of my diocese, without permission, as a backdrop for a message antithetical to the teachings of Jesus."

Trump won 81 percent of white evangelical votes in the 2016 election and exit polls found that white Catholics supported him over Hillary Clinton by 60 percent to 37 percent. According to recent polls, his support has remained steady in those key voting blocs.