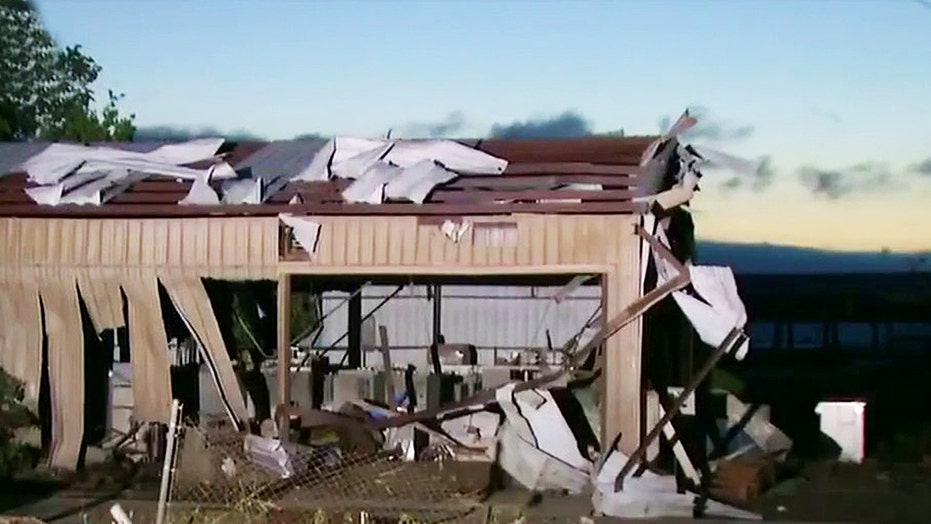 The full fury of a deadly tornado in Oklahoma is on display as a shocking video shows the storm striking a building on Wednesday, sending debris into the air.

The National Weather Service (NWS) said that nine suspected tornadoes touched down in southern Oklahoma on Wednesday as part of a severe weather outbreak in the region that left at least seven dead.

One of the storms caused widespread damage to the town of Madill in Marshall County, near the Red River, according to Donny Raley, the city’s emergency manager.

A trailer factory worker was killed when the twister struck.

Marshall County Emergency Management Director Robert Chaney told The Associated Press the person’s body was found about a fourth of a mile from J&I Manufacturing, a trailer factory outside town where the suspected twister hit just as the workforce was leaving for the day, causing severe damage.

A second person died in Madill when the tornado blew his vehicle off a highway.

The Oklahoma Highway Patrol said in a report the body of Chad L. Weyant, 46, of Madill was found in the median and his vehicle in a nearby field.

Shocking video from storm chaser Pecos Hank shows the tornado up close at it damaged structures and tossed debris in the air.

The tornado damaged at least 12 homes, businesses, and power lines in the area, according to FOX25.

Two of the major facilities that were hit, J&I Manufacturing and Oklahoma Steel and Wire, are two companies that are a big job source for people living in the area, according to the television station.

The storm system that slammed Oklahoma is blamed for several deaths across the region, including three people in Polk County, Texas.

David Maynard sifts through the rubble searching for his wallet, Thursday, April 23, 2020, in Onalaska, Texas, after a tornado destroyed his home the night before. (Brett Coomer/Houston Chronicle via AP)

The NWS Storm Prediction Center (SPC) said there were preliminary reports of 26 tornadoes throughout the day Wednesday across the Southern Plains, with the number likely to go up as the severe weather moves further east.

Another round of severe weather is possible for millions across the South on Thursday, with the threat of large hail, damaging wind, flash flooding, and potentially large tornadoes, with the danger increasing as night falls.

"It's not over yet," Fox News senior meteorologist Janice Dean said on "Fox & Friends." "We're going to see the potential for strong storms, including deadly tornadoes, the risk for deadly tornadoes across portions of Louisiana, Alabama, Mississippi, through Georgia and Florida, and then the Carolinas."

Fox News' Brandon Noriega and The Associated Press contributed to this report.