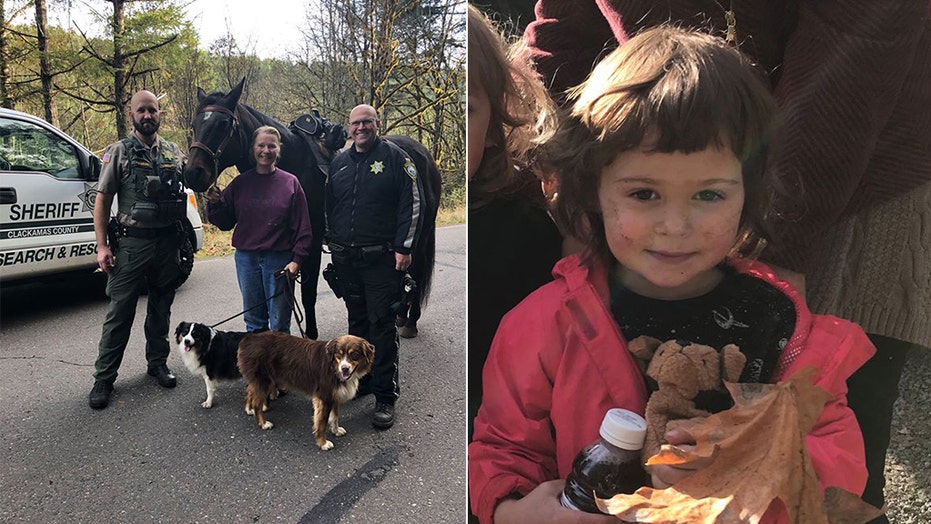 The frantic search for a missing 2-year-old girl lost in the Oregon wilderness had a happy ending after the toddler was found safe by a woman on horseback and her dog.

Tammy Stevens, 59, of Beaverton, was out for a ride Thursday morning with her horse, Bo, and her dogs, Wilson and Maddie, miniature Australian Shepherds, when she joined the search for the missing girl, according to Sgt. Marcus Mendoza, a spokesman for the Clackamas County Sheriff’s Office.

Little Iris Nix was walking with her grandmother on a trail in the Molalla River Recreation Area when she ran ahead and out of sight, Mendoza said.

He said as Stevens scouted terrain she described as steep and dangerous, she heard a child crying.

“I said to Wilson, ‘Go get her and show me the way,’” Stevens said in a recorded interview with a deputy.

“Wilson was climbing for her so I tied Bo up and then climbed up, really steep, super steep, about 70 feet and there she was,” she said. “She was pretty upset.”

Iris was out for a walk with her grandmother Gayla Ann Jay, 62, of Molalla, and a sibling, when she disappeared. Her grandmother looked for 15 minutes and then summoned help from loggers passing by.

MISSING MINNESOTA BOY, 6, AND HIS DOG, FOUND IN CORNFIELD BY DRONE WITH THERMAL CAMERA

Iris was lost in the wood for about two hours.

“It was a really good story,” Stevens said. “I’m so thankful.”