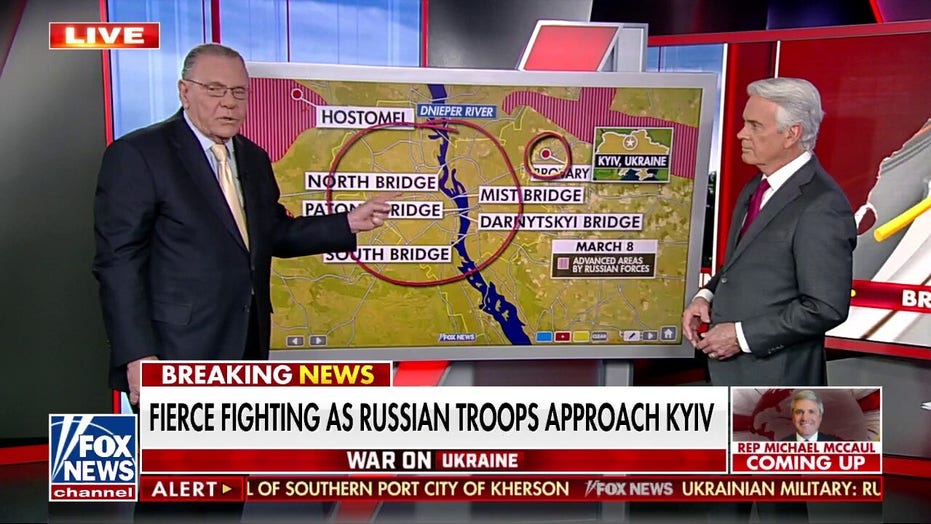 Gen. Keane: Could be weeks before 'final outcome' in Russia-Ukraine crisis

As more than 2 million refugees from Ukraine begin to scatter throughout Europe and beyond, some are carrying valuable witness evidence to build a case for potential war crimes.

More and more, the people who are turning up at border crossings are survivors who have fled cities hardest hit by Russian forces.

"It was very eerie," said Ihor Diekov, one of the many people who crossed the Irpin River outside Kyiv on the slippery wooden planks of a makeshift bridge after Ukrainians blew up the concrete span to slow the Russian advance.

A family fleeing from Ukraine waits for the train at the border crossing station in Medyka, Poland, Thursday, March 10, 2022. (AP Photo/Visar Kryeziu))

He heard gunshots as he crossed and saw corpses along the road.

"The Russians promised to provide a (humanitarian) corridor, which they did not comply with. They were shooting civilians," he said. "That’s absolutely true. I witnessed it. People were scared."

Such testimonies will increasingly reach the world in the coming days as more people flow along fragile humanitarian corridors.

Ukrainian President Volodymyr Zelenskyy on Wednesday said three such corridors were operating from bombarded areas and, in all, about 35,000 people got out. People left Sumy, in the northeast near the Russian border; the suburbs of Kyiv; and Enerhodar, the southern town where Russian forces took over a large nuclear plant.

"Yes, I saw corpses of civilians," said Ilya Ivanov, who reached Poland after fleeing a village outside Sumy where Russian forces rolled through. "They shoot at civilians with machine guns."

More evacuations were announced Thursday as desperate residents sought to leave cities where food, water, medicines and other essentials were running out.

In a staggering measure of displacement, Kyiv Mayor Vitali Klitschko on Thursday said about 2 million people, or "every second person" among the capital’s residents, have left the metro area.

In addition to the growing number of refugees, at least 1 million people have been displaced within Ukraine, International Organization for Migration director general Antonio Vitorino told reporters. The scale of the humanitarian crisis is so extreme that the "worst case scenario" in the IOM's contingency planning has already been surpassed, he said.

The United Nations human rights office said Wednesday it had recorded the killings of 516 civilians in Ukraine in the two weeks since Russia invaded, including 37 children. Most have been caused by "the use of explosive weapons with a wide impact area," it said. It believes the real toll is "considerably higher" and noted that its numbers don’t include some areas of "intense hostilities," including Mariupol.

Some of the latest refugees have seen those deaths first-hand. Their testimonies will be a critical part of efforts to hold Russia accountable for targeting civilians and civilian structures like hospitals and homes.

The International Criminal Court prosecutor last week launched an investigation that could target senior officials believed responsible for war crimes, after dozens of the court’s member states asked him to act. Evidence collection has begun.

Vice President Kamala Harris on Thursday embraced calls for an international war crimes investigation of Russia, expressing outrage over the bombing of the children’s hospital in Mariupol. "Absolutely there should be an investigation, and we should all be watching," she said.

Some countries continued to ease measures for refugees. Britain said that from Tuesday, Ukrainians with passports no longer need to travel to a visa application center to provide fingerprints and can instead apply to enter the U.K. online and give fingerprints after arrival. Fewer than 1,000 visas have been granted out of more than 22,000 applications for Ukrainians to join their families there.

Ukrainians who manage to flee fear for those who can't.

"I am afraid," said Anna Potapola, a mother of two who arrived in Poland from the city of Dnipro. "When we had to leave Ukraine my children asked me, ‘Will we survive?’ I am very afraid and scared for the people left behind."