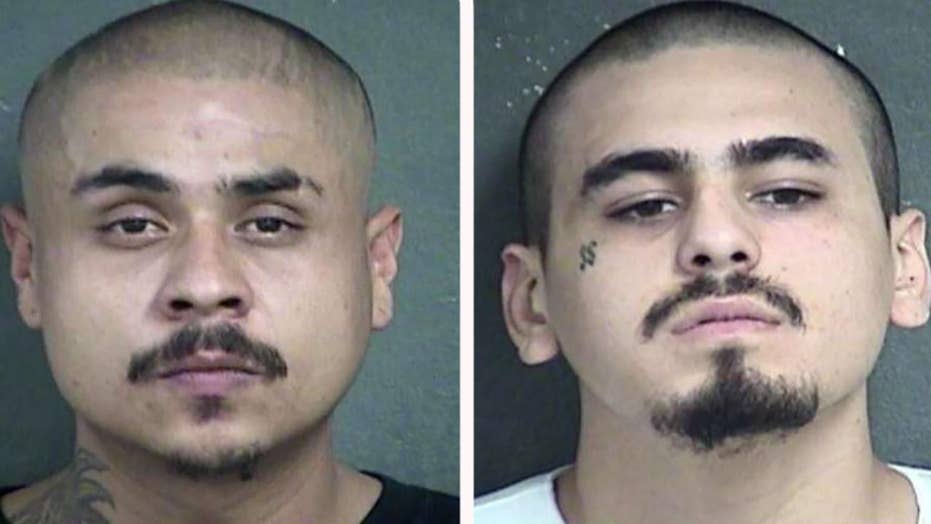 One male suspect is in custody and another is on the run after a deadly shooting inside a Kansas City bar; Alicia Acuna has the latest.

One of the accused triggermen in a deadly Kansas shooting early Sunday remained "armed and dangerous" and on the loose Monday amid a desperate police hunt that already had netted one of the men believed to be behind the barroom bloodbath.

Javier Alatorre, 23, was taken into custody Sunday afternoon in Kansas City, Mo., by multiple agencies, including the FBI, who were investigating the shooting at the Tequila KC Bar in Kansas City, Kan., which left four people dead and five others wounded.

The second suspect, identified as 30-year-old Hugo Villanueva-Morales, remained on the run, Kansas police said. He was considered armed and dangerous.

Both men have been charged with four counts of first-degree murder and have had bonds set at $1 million.

Hugo Villanueva-Morales and Javier Alatorre have both been charged with first-degree murder in a shooting that left four people dead at a Kansas City, Kan., bar on Sunday morning. (Kansas City, Kansas Police Department)

Police spokesperson T.J. Tomasic said Sunday the 1:30 a.m. shooting inside the bar was the result of an earlier altercation in which one of the suspects had reportedly fought with several people inside the establishment. It wasn't immediately clear if the incident involved Villanueva-Morales or Alatorre.

The fracas arose at about 11 p.m. when a bartender — who previously had experienced problems with the suspect — refused to serve him, The Kansas City Star reported. In the flap that followed, the suspect reportedly threw a cup at the bartender and subsequently was kicked out with the help of four people.

Around the bar's last call, the suspect came back with another man and both opened fire, the bartender told cops.