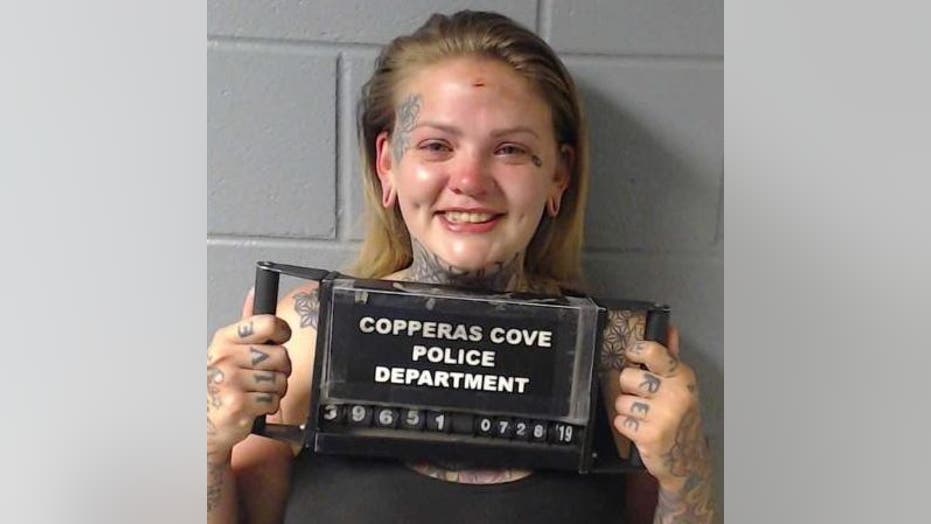 A Texas mother allegedly cursed and shouted a racial slur as she was being arrested at a bar Sunday night, an incident police say began when the 26-year-old left her infant in a running car outside the establishment while she went inside to toss back some shots.

Samantha Vaughan, 26, was discovered inside TrackSide, a nightclub in Copperas Cove, just before 2 a.m., according to local reports. Minutes before, investigators said they found her baby in the backseat of a car outside.

Samantha Vaughan, 26, was arrested after allegedly leaving her infant inside a running vehicle while taking shots inside a nightclub in Texas. (Copperas Cove Police Department)

Officers who spotted Vaughan said they smelled “a strong odor commonly associated with the consumption of an alcoholic beverage emitting from her person," KWTX reported, citing an arrest warrant affidavit.

Vaughan allegedly told officers she was picking up her husband at the club, went to the bathroom, then “sat with him while she consumed the two shots."

When officers tried taking her into custody, the mother wouldn't comply, according to the report. After dropping herself to the ground, she “continued to thrash her body around…yell and throw herself about," police said.

At one point, Vaughan allegedly yelled: “You will not take my child and place her with a f------ [n-word]."

Investigators said Vaughan "smashed her forehead" into a steel bar inside the police vehicle two times, causing a cut to her head, during her arrest.

Officers said a breathalyzer test determined her blood alcohol level was 0.148. The state of Texas defines alcohol intoxication as having a blood alcohol content of 0.08 or more.

Vaughan was reportedly charged with abandoning/endangering a child with intent to return.