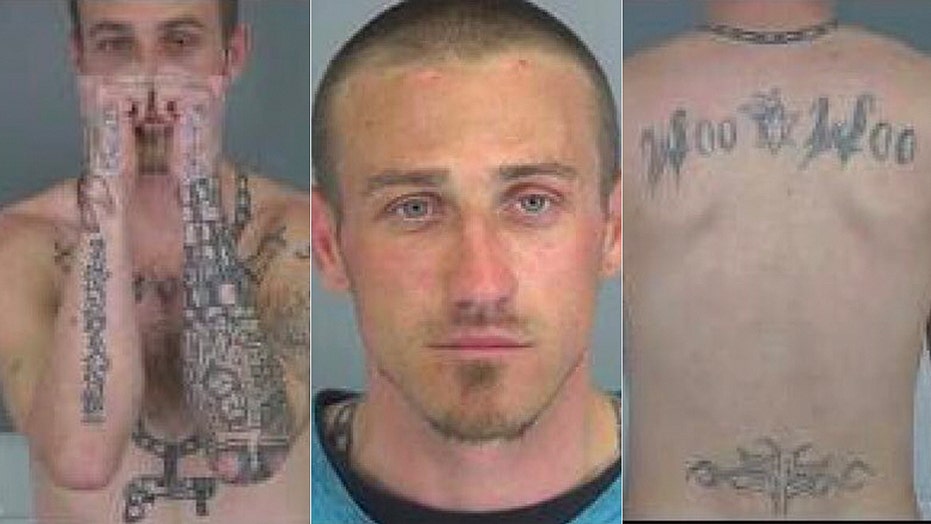 A South Carolina man was accused of going on a killing spree, fatally stabbing three people in Tennessee and Florida before he was arrested after shooting at law enforcement officers.

Stanley Douglas Mossburg was taken into custody Tuesday in Florida after an overnight standoff.

One victim, a man doing laundry, was killed in Greene County, Tenn., on Oct. 2. The other two victims, a man and a woman who were elderly, were killed in Winter Haven, Fla., on Sunday, authorities said.

“This person is evil in the flesh,” he said.

Judd said there was a third person in at the Winter Haven house, a man, but he said the 35-year-old Mossburg, who goes by the name “Woo Woo,” spared the man's life after holding him hostage for several hours.

The sheriff said that during the ordeal Mossburg told that man, “I’m not going to kill you because God told me not to.”

Judd also quoted Mossburg as telling the man that he wanted to be a serial killer and that he liked killing people.

“He, Mossburg, said the man and the woman were number seven and eight and his goal was 11,” the sheriff said.

“We hope and pray there are no more victims, that he’s just bragging,” he said.

Judd said the man called 911 hours after Mossburg left the house on Monday afternoon. He said the man didn’t call sooner because he thought Mossburg may have been lingering outside the house.

Authorities said that after killing the man in Tennessee, identified as Christopher Short, Mossburg drove the man’s car to Spartanburg, S.C., where he lives and has a long rap sheet for stealing cars and using illegal drugs.

There, Mossburg’s sister bought him a bus ticket to Orlando, Judd said.

Authorities learned Mossburg was in Florida Oct. 11 when he went to a pawn shop to sell items.

When deputies converged on the murder scene in Winter Haven on Monday evening, they found the female victim’s car fewer than two blocks away.

They chased Mossburg to a house where he barricaded himself.

Judd said throughout the night, deputies surrounding the house tried to talk Mossburg into surrendering. He said Mossburg responded by firing seven or eight shots at deputies.

Tuesday morning, after breaking down the garage door, they found Mossburg hiding under a pool table.