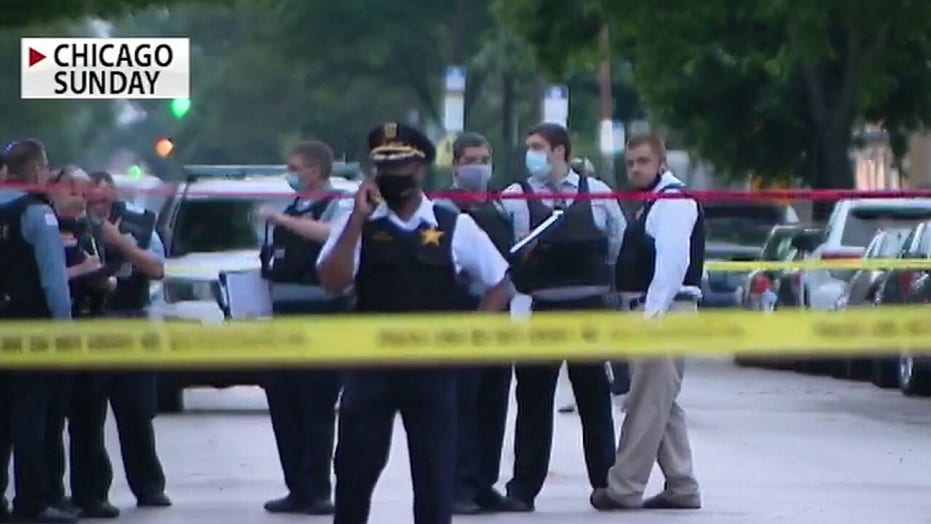 A spike in big-city shootings in recent days has some worrying that a turbulent mix of the coronavirus pandemic, nationwide protests and record gun sales could be the making of a particularly violent summer.

Although 2020 is on pace to have half as many mass shootings as last year’s record-breaking numbers, other non-suicidal gun deaths are on pace to exceed 2019, according to the Gun Violence Archive.

That increase started before the summer when there is traditionally a spike due to people venture outside more. Gun experts say the spike might have many causes, including an American public increasingly stressed by the economic impact of the coronavirus pandemic and deep divisions over racial justice and policing.

Caution tape is shown near a sign with the names of victims of police violence, Saturday, June 20, 2020, at the Capitol Hill Occupied Protest zone in Seattle.  (AP)

"There's something going on at the moment, these underlying tensions," said James Densley, professor of law enforcement and criminal justice at Metropolitan State University. "Everyone's been cooped up for so long with the pandemic, and then we had this sort of explosion of anger and grief after George Floyd's killing."

Over the weekend, more than 100 people were injured in shootings in Chicago, which police say is the most people shot in one weekend in Chicago since at least 2012.

In North Carolina, three people were killed and six were wounded early Monday when unknown gunmen opened fire during an impromptu block party in Charlotte. At a birthday party in Syracuse, N.Y., over the weekend, nine people were injured from gun violence.

In Minneapolis, people fled a popular nightlife and retail area as gunfire broke out, injuring 11 people early Sunday. Separately, a man was fatally shot in the city's downtown that same night.

And for the second time in less than 48 hours, there was a shooting in Seattle's protest zone known as CHOP, or the "Capitol Hill Occupied Protest." A 17-year-old victim was shot late Sunday night in the area a day after a 19-year-old man was fatally shot and a 33-year-old man critically injured.

While nationwide protests have focused on police violence against African-Americans, the recent shootings also highlight another scourge that falls disproportionately on minority communities: gun violence that has plagued some big cities long before the pandemic or protests.

Detroit, in particular, has experienced a rise in shootings; this past weekend, there were 18 different shootings that led to four people dead and 25 injured.

In some cities around the country, law enforcement has struggled with how to handle protests of police -- some of which have been violent and many of which have required significant resources merely because of their size -- while also patrolling the rest of the city.

In metro Atlanta's Dekalb County, Chief Mirtha V. Ramos said the usual tactics the agency uses to get ahead of potential violence in the summer aren't available this year due to the pandemic, so the agency hopes increased patrols will allow officers to engage with the public.

Gun-rights activists are pointing to historic numbers of background checks for firearms purchases this year as evidence that the public at large is increasingly worried about personal safety. Gun-control advocates say more firearms will only lead to more violence.