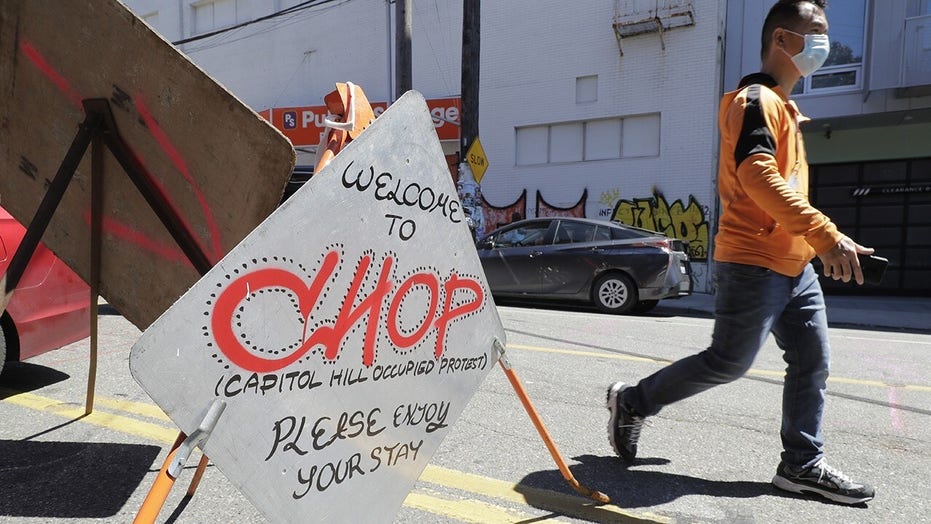 Protesters vow not to leave until their demands are met; William La Jeunesse reports.

Reclaiming the police-free area near downtown Seattle protesters are calling Capitol Hill Organized Protest, or CHOP, will take a lot of effort from community leaders, police brass and elected officials, according to experts.

The situation as it stands is untenable, they say, with three shootings in recent days and police banned from responding to those incidents, experts on policing told Fox News Tuesday. One of those shootings was fatal.

“Obviously, the preferred outcome is that it’s resolved nonviolently and people pack up their sleeping bags and go home,” said Eugene O’Donnell, a professor of police studies at New York's John Jay College of Criminal Justice and a former member of the NYPD.

Several protesters can be seen in the video forming a human chain to prevent other protesters from following officer during their retreat. (Seattle Police Department)

He said those occupying the six-block CHOP zone have suffered a “black eye” from the violence and from refusing to let police investigate.

“I wouldn’t be surprised if they want to find a way out of there,” he said.

On Monday, Seattle Mayor Jenny Durkan said the city would work with community leaders to clear the CHOP area. She also said police will soon return to a Capitol Hill police station — largely abandoned after clashes with protesters following the police-involved of George Floyd back in May.

A person who said he goes by the name James Madison carries a rifle as he walks June 20, 2020, near what has been named the Capitol Hill Occupied Protest zone in Seattle. Madison is part of the volunteer security team who have been working inside the CHOP zone, and said he and other armed volunteers were patrolling Saturday to keep the area safe. (AP Photo/Ted S. Warren)

Should the negotiations not work, O’Donnell said police would have no other choice but to move in, perhaps with the imprimatur of a court order characterizing CHOP as a threat to public safety.

But if that happens, police brass may not feel that the mayor will have their back, given her statements supporting the occupation.

“She has no credibility,” the professor said.

Retired NYPD Lt. Darrin Porcher, a professor of criminal justice at New York’s Pace University who has appeared on “Fox & Friends,” said he was confident that negotiations involving CHOP protesters, community leaders, police and elected officials will end the occupation.

“But if the leadership at that table can’t resolve the various agendas then they will have to resort to police action,” Porcher said. “That’s going to be the last resort."

Porcher said that if that becomes necessary, Seattle police will devise a “disorder control strategy” involving officers in riot gear, "hats and bats."

As part of that strategy, police leaders would probe the occupied area for a soft spot to gain access, he said.

Washington State Fraternal Order of Police President Marco Monteblanco, who has also appeared Fox News, said that if the occupiers refuse to leave, “the city has to make a very difficult decision.”

"That could put officers at risk," he said.

Monteblanco called Durkan’s comments recognizing that police have to return to the CHOP zone a step in the right direction.

“People need to realize this is only about public safety,” he said. “We can have discussions on reform and change, but at the same time public safety has to be provided in this zone.”