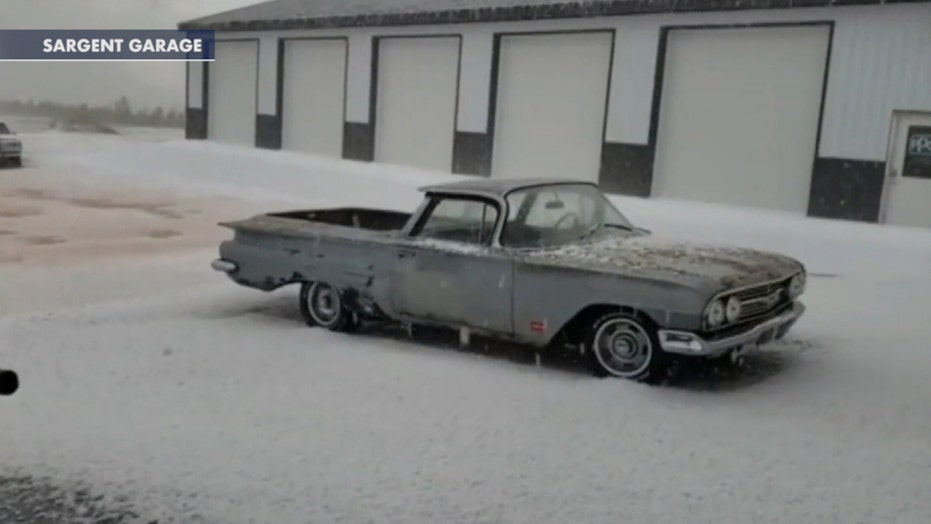 Raw video: Hail pours down outside an auto shop amid a severe thunderstorm warning in Rapid City, South Dakota.

A powerful series of thunderstorms on Sunday in South Dakota left behind a wintery scene, blanketing areas with large hail that covered roads.

The National Weather Service (NWS) office in Rapid City said that scattered severe thunderstorms in the region on Sunday brought hail to parts of the Black Hills in South Dakota, the western South Dakota Plains, and northeastern Wyoming.

"The largest hail reported occurred in Jackson County between Potato Creek and Wanblee, where tennis ball- to baseball-sized hail was reported," forecasters said.

A severe thunderstorm warning was issued for the Rapid City area, where videos showed hailstones pouring down.

At Sargent Garage, a Rapid City auto-shop, hail hammered vehicles parked outside in a video posted to Instagram.

The NWS said that hail larger than 1 inch in diameter and wind gusts of up to 58 miles per hour were reported in multiple locations.

The largest hail from Sunday's storm was about 5 miles north-northeast of Potato Creek, where it measured 2.75-inches in diameter.

"Accumulating hail was also observed in the Black Hills foothills and western Plains as several inches of hail covered the ground and roads from Black Hawk southward to northern portions of Rapid City and points southeast," the NWS said in an overview of the storms.

According to the National Oceanic and Atmospheric Administration's (NOAA) National Severe Storms Laboratory (NSSL), hail is a form of precipitation that forms inside the updrafts of thunderstorms.

Hail falls when the thunderstorm's updraft can no longer support the weight of the newly formed hailstone. When those stones fall at speeds up to 100 mph, they can damage aircraft, homes, and cars, and also be deadly to livestock and people.

The current world record for a hailstone is 8 inches across, or about the size of a volleyball. It fell near Vivian, S.D., on July 23, 2010.

NOAA's National Climate Extremes Committee said in 2010 that it also was the heaviest ever recorded in the U.S., weighing 1 pound, 15 ounces.