State and county leaders worked Wednesday and Thursday to sift through the damage following severe weather and deadly tornadoes that hit the South.

"This kind of came out of nowhere. The first call we got was around nine o'clock, maybe just a little after, about some folks that were trapped here in the Crystal Lane [and] Lost Valley Road are of Pickens County," he explained, noting that roofs had been "blown off" and some houses were "overturned."

Gibson said there had only been minor injuries on the scene and that they were conducting a second search to ensure they hadn't missed anyone who could have been trapped.

The station said Thursday the National Weather Service (NWS) would be working to survey the damage and confirm if a tornado or multiple tornadoes touched down.

This comes after Louisiana's Gov. John Bel Edwards declared a state of emergency on Wednesday following tornadoes that killed a man in a New Orleans area neighborhood.

The governor's office said Edwards was traveling to the affected areas in St. Bernard, Orleans, Jefferson and St. Tammany parishes to "conduct a flyover of the impacted areas."

"Unfortunately this morning, many of our people are waking up with their lives upside down because of the tragic tornadoes last night in St. Bernard, Orleans, Jefferson and St. Tammany parishes. Sadly, one person has died in the storm, and we are praying that there are no more fatalities," Edwards said in a statement.

"Thankfully, local and state responders worked through the night to help as many families as they could overnight, and the work will continue into today and the coming weeks. Unfortunately, our people have become all too familiar with rebuilding after tragedy and loss, but it is never easy. My prayers are with everyone who is hurting because of these tornadoes today and I have pledged to local leaders that we will be here to support their long-term recovery efforts."

Walking the streets in the Arabi community of St. Bernard Parish, Edwards told reporters that it was "awfully sad, because the destruction is so devastating."

"The good news is most of your neighbors outside of this narrow swath — they’re able to help," he noted.

While about 13,000 homes and businesses were reportedly without power in the three parishes around New Orleans after the storm, outage tracker PowerOutage.US showed just 1,154 customers without power in Louisiana on Thursday.

Officials there confirmed the death of a 25-year-old man, Connor Lambert, as storm-related. The parish's coroner's office said he had died due to multiple blunt force injuries.

Several others were injured – including eight in the emergency department at Ochsner Health – and local emergency officials reported that dozens of homes were damaged in St. Bernard Parish.

A girl with muscular dystrophy who was on a breathing machine and her mother were inside their one-story house when it was picked up off its foundation and tossed about 30 feet.

The governor's office also noted that the NWS confirmed two tornadoes in Louisiana and was sending three survey teams on Wednesday to determine the scale and track of those tornadoes, as well as determine if there were additional twisters.

The NWS said the damage in Arabi was caused by a tornado of at least EF-3 strength and the tornado in the Lacombe area was an EF-1.

The response effort began on Tuesday night and the Louisiana State Fire Marshal’s Office has since deployed more than 100 personnel and search and rescue specialists. 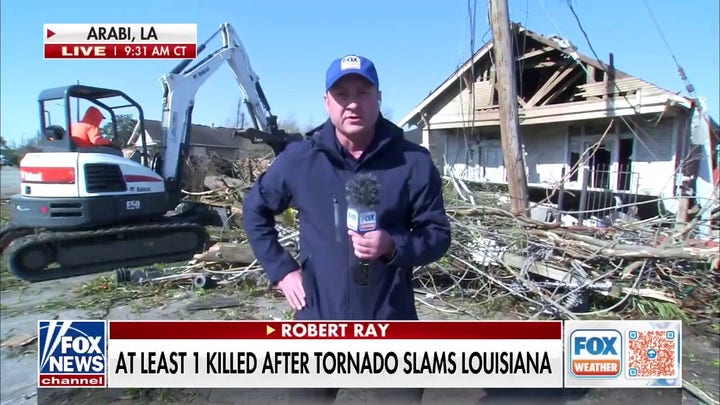 Hundreds of National Guard personnel were activated to clear roads and provide support.

Residents worked to sort through the wreckage on Wednesday after Tuesday night's storm system also spawned a tornado that touched down in the Lacombe area of St. Tammany Parish and damaged eastern New Orleans.

All of this comes after other tornadoes from the same storm system hit parts of Texas and Oklahoma, injuring others and killing one woman north of Dallas.

In Alabama, an apparent tornado shredded a metal building and the city of Sylacauga received more than 8 inches of rain overnight.

The Mississippi Emergency Management Agency said a dozen counties had damage and that there had been two injuries.

The system will finally exit the coast on Thursday, although parts of the Southeast could see some isolated thunderstorms and heavy rain, according to Fox News' Janice Dean.