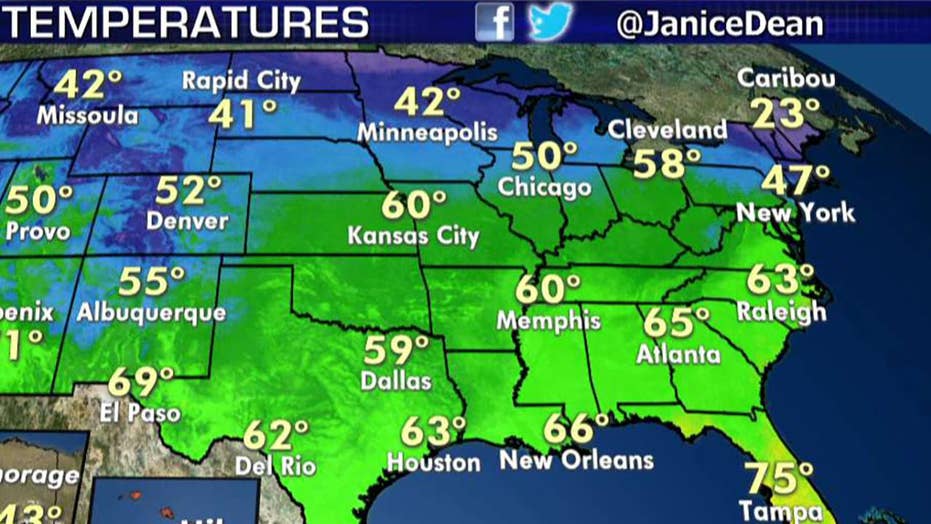 Even though spring may have sprung across much of the country, a major late-season winter storm is threatening to bring blizzard conditions to the Central U.S. -- and the "bomb cyclone's" impact could be felt nationwide.

The National Weather Service's Weather Prediction Center said Tuesday the developing "significant" storm system will first bring snow over the Cascades before spreading over the Northern Rockies into the Upper Midwest by midweek.

"A blizzard my friends, in April, it's happening across portions of South Dakota up towards Nebraska and then into Wisconsin," Fox News Senior Meteorologist Janice Dean said on "FOX & friends." "We could see over a foot of snow and windy conditions and the potential for flooding ahead of this, some ice as well."

The storm moving in from the Pacific Ocean is forecast to intensify and form into a new inland "bomb cyclone." A bomb cyclone is a rapid drop in air pressure — at least 24 millibars in 24 hours — and often is over or near oceans or seas because it requires warm moist air smacking into cold dry air, along with volatile weather from the jet stream.

Heavy snow and strong winds from the storm are forecast to produce "life-threatening" travel conditions across the region starting Wednesday, according to the WPC. Blizzard conditions are expected as winds intensify late Tuesday into Wednesday.

"The heavy wet snow may also lead to power outages," the NWS said.

This would be the second such storm in less than a month. The March 13 storm caused massive flooding in the Midwest, a blizzard in Colorado and Wyoming, and produced winds of between 96 mph and 110 mph.

Besides heavy snow, rain will stretch across parts of the central U.S. that are still dealing with river flooding, including Iowa and Illinois. There is also the threat of severe weather for the Mississippi and Ohio River valleys through Thursday.

This week's bomb cyclone one is expected to be similar in intensity and in snowfall, meteorologists said. Heavy, wet snow will fall from the Nebraska panhandle through south central and southeastern South Dakota into western Minnesota. Wind speeds can reach 50 mph to 60 mph  across Kansas.

Up to 2 feet of snow is forecast from the late-season winter storm across the Central U.S., in addition to heavy rain. (Fox News)

The intense storm system may affect up to 200 million Americans by the end of the week, according to AccuWeather.

MASSIVE WATERSPOUT IN MALAYSIA SPINS OFFSHORE BEFORE MAKING LANDFALL, DAMAGING UP TO 50 BUILDINGS

Blizzard warnings stretch from Nebraska to western Minnesota, where up to 2 feet of "very heavy and wet" snow may fall.

"This may not be your typical blizzard with dry, powdery snow for the Plains and Upper Midwest," said AccuWeather Senior Meteorologist Alex Sosnowski. "But, this may be more of a plastering effect with heavy, wet snow that is difficult to shovel and plow."

Heavy snow may also impact the Minneapolis-St. Paul metro area, which is also forecast to see rain before the changeover to frozen precipitation.

"If the mix doesn`t reach as far north as the Twin Cities, then perhaps the metro could experience blizzard conditions as well -- similar to what happened last year," the NWS office said.

After impacting the Central U.S., the storm system is forecast to eventually bring rain to the Northeast by the end of the week.