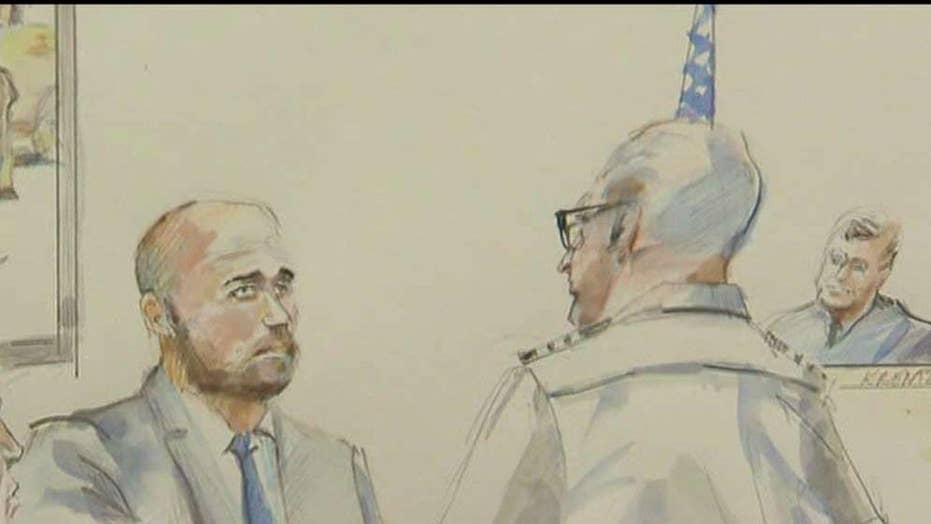 Trial continues for Edward Gallagher; Jonathan Hunt has the details.

SAN DIEGO – The court-martial of Special Operations Chief Edward Gallagher continued Wednesday with the prosecution calling a star witness—a Navy SEAL who claims he witnessed Gallagher drive a knife into the neck of a young ISIS detainee, leaving the man dead.

“I saw him stab the prisoner in the side of the neck,” said SO1 Craig Miller, who served in the same SEAL platoon as Gallagher.

In the most dramatic testimony yet, Miller said he believed he saw Gallagher stab the man twice. He identified another SEAL, SO1 Corey Scott, who was next to the detainee as well.

“He kind of like jumped back a little bit” after the alleged stabbing, Miller said.

“The blood just came out,” said Miller, describing the prisoner’s neck wound. “It looked similar to a baby throwing up.” 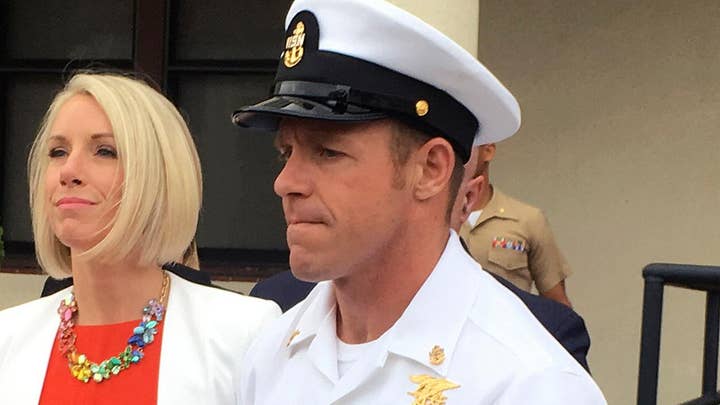 “Your memory is so good at the questions they ask you,” Parlatore said, referring to Miller’s earlier testimony.

At one point, Parlatore questioned the SEAL about why he provided no photographic evidence to accompany his claim that Gallagher stabbed the ISIS prisoner to death.

“You’re trying to report your chief for stabbing this terrorist. Did anyone think to take a picture of the body?” Parlatore asked.

Earlier Wednesday, SO1 Dylan Dille testified that Gallagher had stated his desire to kill an ISIS prisoner if the opportunity ever arose.

“He said, ‘If we ever get a wounded enemy, that the medics know what to do to nurse him to death,’” Dille said.

Dille also testified to hearing Gallagher come over the radio upon learning that an ISIS prisoner had been captured and saying: “No one touch him. He’s all mine.”

Dille is a former Navy SEAL who served with Gallagher in Mosul in 2017. He served in the Navy from 2010 until last year.

Gallagher, a Navy SEAL, was a medic. His defense said in opening statements that he medically treated the ISIS prisoner he is now accused of stabbing to death.

Dille further testified that the prisoner was conscious, talking to an Iraqi general, and had a “minor injury” to one of his legs. Dille said he returned to his mortar post to provide security because the “tactical situation was declining.”

Dille said he chose not to be in the photo “because it was unprofessional.”

He also recounted the re-enlistment ceremony held for Gallagher, in the presence of the dead ISIS prisoner. The ceremony was conducted by the officer in charge of the SEAL platoon.

Dille then recalled a meeting called by Gallagher of all senior E-6s in which he acknowledged that his junior SEAL colleagues were uncomfortable with the day’s events.

“This was just an ISIS dirtbag,” he quoted Gallagher as saying. “Next time we get a prisoner … it will be out of sight, out of mind.”

The prosecution then turned to another incident, the allegation that Gallagher shot at Iraqi civilians. Dille testified that he witnessed a sniper shot coming from a building where Gallagher was posted on Father’s Day 2017. The shot hit an unarmed elderly man on the street, according to Dille.

“I could tell right away he was hit,” Dille said. “I watched the vapor trail strike him. … As he ran around the corner, it developed into a blood spot.”

Dille then testified that he heard Gallagher’s voice on the radio: “He had thought he had missed.”

In cross-examination, the defense attacked Dille’s recollection of events, accusing him of embellishing the age of the ISIS detainee in court. Dille earlier told jurors that the prisoner looked 12.

“You chose to say 12 to this jury,” Parlatore said, pointing out that Dille previously told investigators from the Naval Criminal Investigative Service that the prisoner was 15-20 years old. “You just want this jury to hear 12.”

“That’s inaccurate,” Dille shot back, claiming he had consistently guessed the age of the prisoner between 12-15.

Parlatore also attacked Dille’s story about the alleged Father’s Day 2017 incident, in which Gallagher is accused of shooting an elderly Iraqi male civilian.

“For dramatic effect, an old man on Father’s Day,” Parlatore charged. “I can see why you’d choose that day.”

Parlatore also asked Dille why he didn’t address his concerns with Gallagher’s alleged egregious behavior while on the battlefield. Dille said there was never an opportunity.

Gallagher’s accusers are cowards who wanted to derail his nomination for a Silver Star for valor and a promotion to teach urban warfare, Parlatore has alleged.

Because there is little evidence beyond eyewitness accounts, the jury will be forced to assess the credibility of prosecution witnesses in deciding the fate of Gallagher. After Dille’s testimony, three questions were submitted by jurors, but little light was shed on whether or not they believed his testimony.

Speaking to reporters Wednesday afternoon, Parlatore said Miller’s testimony proved he was a liar and a coward.

“He's just not worthy of belief,” he said. “When you're not telling the truth, you can't remember anything to keep your story straight.”

It will be up to a seven-man jury of mostly combat veterans to decide if it was a snapshot in poor taste of an enemy who succumbed to battle wounds or a trophy shot of a war prisoner killed under his care.

Gallagher, whose case has drawn President Trump’s attention, faces seven counts that include premeditated murder and attempted murder. He’s also accused of shooting two civilians — an elderly man and a school-age girl — from sniper perches in Iraq in 2017. He has pleaded not guilty to the charges, for which he could face a life sentence.