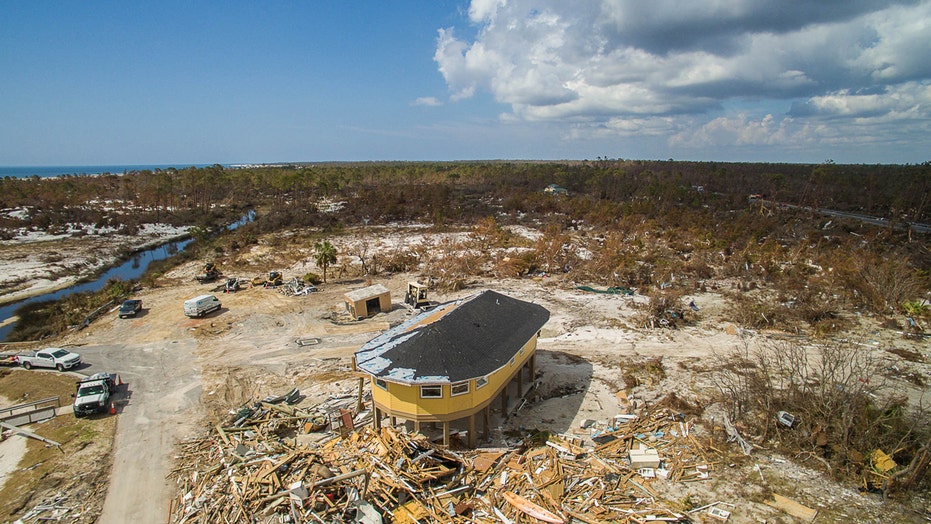 When the fierce winds of hurricanes howl, these unique circular structures are often the only thing left standing among splintered beachfront homes and floodwaters.

For more than five decades, design company Deltec Homes has built thousands of aerodynamic structures with a round design and an emphasis on strong connections that helps make homes especially resistant to fierce storms.

“We can’t just be thinking about the short term, we have to take the long-term view in building homes,” Deltec Homes President Steve Linton told Fox News earlier this month.

The Asheville, N.C.-based homebuilder first constructed the unique buildings in the late 1960s for resorts. Buildings were used in coastal locations and ski areas where people would typically vacation, and where the circular shape took advantage of the panoramic views

A Deltec home is still standing amid the rubble in Mexico Beach, Fla. after Hurricane Michael roared ashore as a Category 5 hurricane in 2018. (Deltec Homes)

But it was in the late ‘80s and early ’90s, when major hurricanes such as Hugo and Andrew tore into the Southeast and Florida, that Deltec homes, which people were using as vacation cottages and residences, stood out, according to Linton.

“Once they saw how those homes were surviving these hurricanes when others weren’t, then we started on this path that we’ve been on for the past couple of decades,” he told Fox News.

The makings of a hurricane-resistant home

A Deltec Home under construction, which shows how prefabricated parts are assembled on site. (Deltec Homes)

In decades of constructing homes, builders at Deltec have refined their design for buildings to withstand wind up to 185 mph, that of the strongest Category-5 hurricanes.

The aerodynamic shape of the homes prevents wind from building up enough pressure on any side, avoiding a structural failure. The reinforced roof is at an optimal pitch to deflect the winds and reduce any possible lift.

A graphic showing the cutaway of the features that make Deltec Homes unique, with emphasis on shape and connections. (Deltec Homes)

Linton told Fox News the circular structure allows for 30 percent less pressure building up outside, as opposed to one with more of a rectangular shape.

“We've reduced the force that's acting on the home, which is a pretty powerful thing,” he said.

On the inside, the homes also are built with strength in mind.

The unique construction methods of Deltec homes includes a radial truss array that works like spokes on a bicycle wheel as any potential energy from sustained high winds is allowed to be dispersed through the entire structure, instead of building up in a single area. (Deltec Homes)

The roof and floors are built with a radial truss array that works like spokes on a bicycle wheel. Any potential energy from sustained high winds disperses throughout the entire structure, instead of building up in a single area.

Linton told Fox News the design is lightweight, but “able to withstand a lot of force.”

“A whole other level of strength in the building that you aren’t going to find in a traditional home,” he told Fox News.

Deltec Homes President Steve Linton says that hurricane-resistant features on the company's homes pay off over time. To the right is a Deltec home that withstood Hurricane Harvey in 2017 in Rockport, Texas. (Deltec Homes)

In addition to the design, the homebuilder also uses specific materials to add to the strength of the homes. Linton said the company has worked with the same lumber mill in south Georgia for decades, using Southern Yellow Pine. Machine-rated “diamond grade” lumber, of up 2,400 pounds per square inch (psi) is used in the trusses and walls -- twice as strong as a typical framing material.

Each board is then acoustically tested to make sure it meets the strength requirements of the design, using a machine with waves that measure each board and sounds “like a xylophone,” according to Linton.

A comparison between a Deltec home a traditional stick-built home after Hurricane Irma stuck St. Thomas in 2017. (Deltec Homes)

Each Deltec home also has reinforced windows, with impact glass to prevent wind and water from entering the home. The pre-fab construction method at the company’s factor in Asheville, N.C. is also credited with leading to a tighter fit with the exterior walls and roof, which the company said provides for a more structurally secure building with fewer gaps for wind and rain.

A Deltec home is still standing amid the rubble in Mexico Beach, Fla. after Hurricane Michael roared ashore as a Category 5 hurricane in 2018. (Deltec Homes)

While each home is built with stronger materials that hold up through powerful storms, important connections inside the home keep everything together.

Oversized truss hangers keep the roof system anchored to the walls, which separately have their own multiple construction ties to the floor system. That all adds up to structural stability in high wind.

“You have those strong materials,” Linton told Fox News. “You want to take them and make them work as a system.”

A Deltec home is pictured still standing, with no apparent damage, after Hurricane Harvey in 2017. (Deltec Homes)

According to Linton, Deltec uses hurricane ties that are 12 to 14 inches long, two-sided to get double the layer of protection, and make a “much stronger” component.

Continuous metal strapping from roof trusses to the foundation also help to maintain overall structural stability in the homes. It’s what Linton described as being focused on “the devil’s in the details,” which make up the buildings.

A Deltec home is still standing amid the rubble in Mexico Beach, Fla., after Hurricane Michael roared ashore as a Category 5 hurricane in 2018. (Deltec Homes)

When tropical systems strike homes, Linton said the biggest points of failure tend to be openings, whether it's windows, doors or garage doors.

“People need to either board those up to have special windows with impact glass or shutters,” he said.

A Deltec home pictured after Hurricane Dorian slammed the Bahamas in 2019. (Deltec Homes)

Leaving windows open during a storm to equalize pressure is just a myth, said Linton. The opposite is actually true.

Connections to the roof also matter as a lot of homes built before modern codes did not have roofs properly secured to the walls. A “pretty common” failure point is where the roof rips off from the home, according to Linton.

In terms of water, homeowners should make sure to clean their gutters, make sure the downspouts are working and check to see if water runs away from their home in order for it to have a place to properly drain.

“Have sandbags in the garage in case you need to shore up the doors in your home to keep the temporary floodwaters out,” Linton said, adding that roofs should be inspected to be able to be in good shape in case there’s a 10- to a 20-inch rainstorm.

A Deltec home is pictured after Hurricane Charley in 2004 compared to another home based on traditional construction. (Deltec Homes)

In decades of building homes, Deltec structures have withstood hurricane-force sustained winds of 185 mph. With over 5,000 homes built around the world, the company has never lost a home to hurricanes or high winds.

“Those two homes were very important to us because we want to learn from them,” he said.

One of the homes was an older structure built before more recent innovations came about, and was located on the Abaco island chain in the Bahamas. Hurricane Dorian lashed the area in 2019 with 185 mph winds.

The second home was hit during Hurricane Irma in 2017 when the storm lashed the Virgin Islands. In that incident, the homeowner did not board up the windows and doors, and the storm blew out a section of the wall.

“Those are lessons that we’ve seen in these homes that apply to all homes,” he told Fox News. “Any home that doesn’t have hurricane protection is susceptible.”

Throughout the years, Deltec homes have survived major storms that have gone down in history, such as Dorian, Michael, Maria, Irma, Katrina, Harvey and Hugo.

Linton told Fox News that Deltec homes typically cost around 10 percent more than an average house of the same size, depending on the location and level of customization. He stressed that the hurricane-resistant features cause the higher up-front costs.

A Deltec home is seen after Hurricane Fran in 1996. (Deltec Homes)

Factors such as sustainability, energy costs, lower maintenance all can result in a lower overall cost in a long-term situation for a property. The homes, with their varying levels of customization regarding size and energy efficiency, also come with those panoramic views that Linton said buyers look for.

“One of things Deltec can do is give people that view,” he told Fox News.

Another busy hurricane season on tap