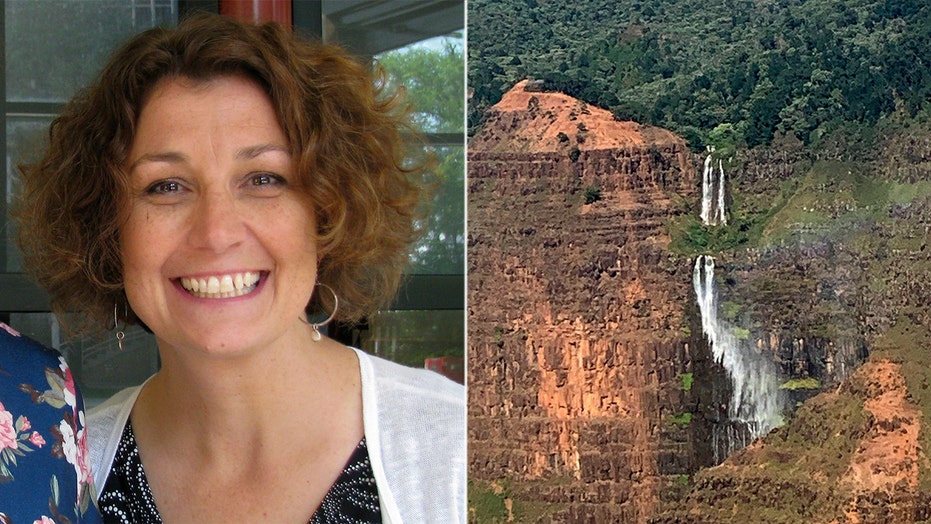 A Wisconsin businesswoman and her daughter were among the victims after a tour helicopter crashed in Hawaii.

The bodies of 47-year-old Amy Gannon, of Madison, and her daughter 13-year-old Jocelyn Gannon were recovered from the wreckage, police said Saturday.

Pilot Paul Matero, 69, of Wailua, Hawaii, and six sightseers were killed in Thursday’s crash. Police confirmed on Saturday there were no survivors.

REMAINS OF 6 ABOARD HAWAII TOUR HELICOPTER FOUND AFTER CRASH, SEARCH FOR LAST PERSON TO CONTINUE: OFFICIALS

Six bodies have been recovered. Rescue efforts were called off Saturday afternoon without the last body being found.

The other victims, including two girls, 10 and 13, were members of a family from Switzerland. Their identities have not been released.

Amy Gannon, 47, in 2018. Photo right shows a waterfall on the Na Pali Coast on the island of Kauai in Hawaii. (Judy Newman/Wisconsin State Journal via AP/AP Photo/Maryclaire Dale)

“When Amy was in front of a room, she really came to life,” said Doyenne co-founder Heather Wentler said, according to the station. “She just brought this energy with her that nobody will ever be able to replace.”

Gannon’s daughter was an eight-grader at Hamilton Middle School in Madison. The school district issued a statement that said, “As individuals, we all have our own ways of coping with bereavement. For many of our students, this could likely be their first experience with this type of loss,” Fox 47 reported.

Friend Dorecia Carr said Gannon’s husband and son were not on Thursday’s flight and are still in Hawaii, the Associated Press reported.

Carr said Gannon put up money so her teenage son, AJ Carr, could become an actor.

“She did so much. She paid for us to leave Madison because she believed in him,” Dorecia Carr said. “So much happened because of her. This is a huge loss.”

The helicopter that was set to tour the rugged Na Pali Coast, the picturesque and remote northern shoreline of Kauai that was featured in the film “Jurassic Park,” crashed on a mountaintop Thursday.