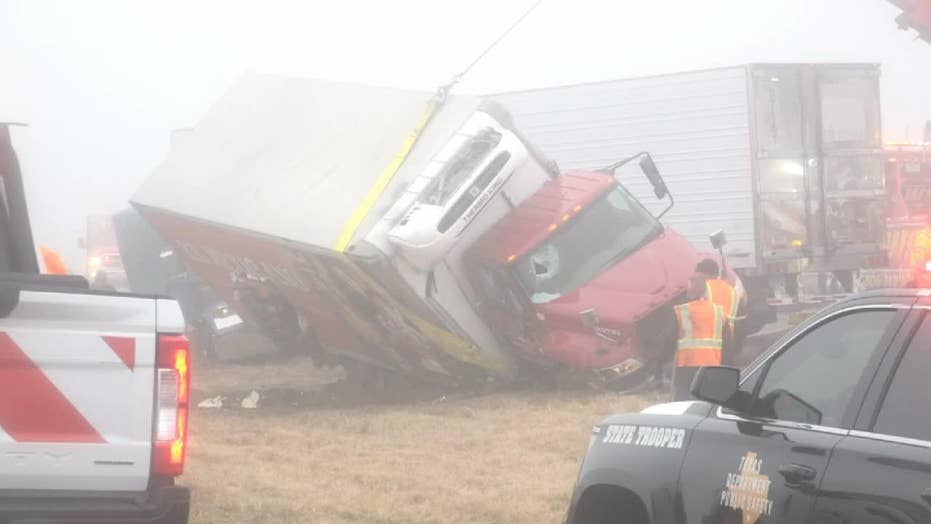 Raw video: At least two people are in the hospital following multiple crashes on a Texas highway due to dense fog.

A Texas TV station news cameraman recorded a harrowing crash involving a tractor-trailer as he was shooting a live shot from the fog-shrouded scene.

Caleb Holder was filming a pileup on Highway 84 in Lubbock County Friday afternoon for KCBD-TV when the tractor-trailer came crashing into the picture after it jackknifed and rolled on its side.

The careening truck struck a Texas trooper and pinned a man in a pickup, sending both to the hospital with non-life-threatening injuries.

“I couldn't remember if I was recording at the time or how the camera was framed. I just saw that trailer coming and knew I had to run away from it,” Holder said.

Holder’s video shows the trooper running from the truck. Then he tripped.

A tractor-trailer jackknifed and rolled over as it crashed into a pileup on Highway 84 in Lubbock County, Texas. (Lubbock County Emergency Management)

“As I was running away, I remember looking back and seeing the trooper also running, and then I could see that he had fallen down and that the trailer was coming really close to him,” Holder said.

The station reported that there were five separate crashes at the scene involving four tractor-trailers and four other vehicles. The crashes were blamed on heavy fog.

“Eastbound 84 towards Post is completely shut down until further notice,” Slaton police said on Facebook after the pileup. “Very heavy fog. Reported 20 feet visibility all the way to Post, Tx.”