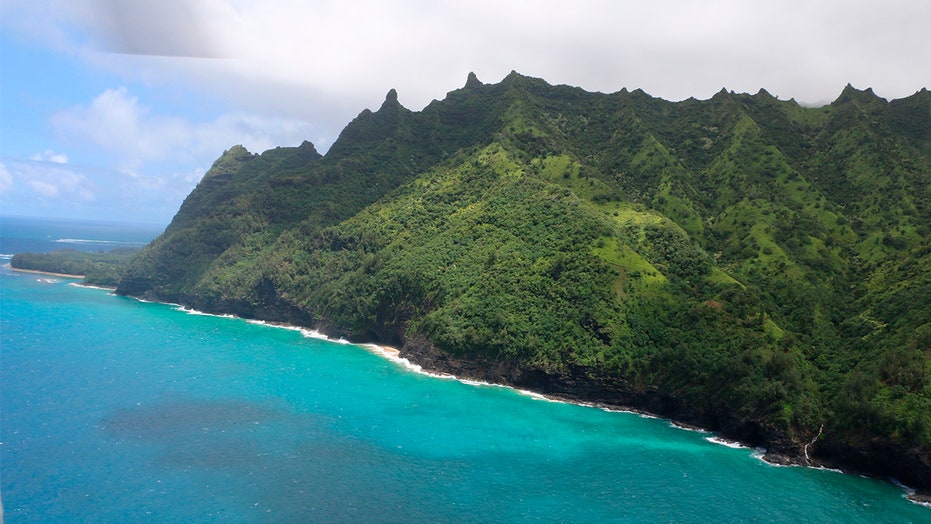 Six of the seven people on board a Hawaii tour helicopter that went missing Thursday have been found, officials said Friday.

There are no indications of survivors. The seventh person has not been recovered and a search would resume Saturday morning, depending on the weather, according to officials.

Authorities said those who were recovered have not been publicly identified and their families are being notified.

In this photo released by the U.S. Coast Guard, Coast Guard Cutter William Hart moves toward the Na Pali Coast on the Hawaiian island of Kauai on Friday, Dec. 27, 2019, the day after a tour helicopter disappeared with seven people aboard. Authorities say wreckage of the helicopter has been found in a mountainous area on the island.  (Lt. j.g. Daniel Winter/U.S. Coast Guard via AP)

The helicopter wreckage was found about 9:30 a.m. Friday in a mountainous area on the east side of the island of Kauai, authorities said. A pilot and six passengers, including two children, had been on board when the aircraft took off.

Authorities had said they were sending additional resources to search for survivors.

Kauai Fire Department Battalion Chief Sol Kanoho had said "no actionable information on the status of the passengers" was available during a news conference Friday afternoon.

He said two groups were on the helicopter: a group of four people and a party of two.

"First and foremost, our thoughts and prayers are with the families of these passengers," Kauai Mayor Derek Kawakami said.

This photo provided by the Hawaii Department of Land and Natural Resources shows a Coast Guard search and rescue team looking over Napali Coast State Wilderness Park for a tour Helicopter that disappeared in Hawaii with seven people aboard on Friday, Dec. 27, 2019. Authorities say the helicopter's owner called for help about 45 minutes after the chopper was due back from a tour of Kauai's Na Pali Coast on Thursday evening. (Dan Dennison/Hawaii DLNR via AP)

The U.S. Coast Guard had resumed its search for the tour helicopter more than 12 hours after it vanished during a flight over the nearly uninhabited island.

The helicopter had been due to arrive back at Kauai’s Na Pali coast at 5:21 p.m. local time on Thursday but never made it back. Authorities last made contact with the chopper around 4:40 p.m. when the pilot reported the tour was leaving the Waimea Canyon area, Hawaii News Now reported.

The Coast Guard initially sent an MH-65 Dolphin rescue helicopter crew and a cutter but found no sign of the aircraft.

The weather conditions in the area were considered challenging, the local news outlet reported.

In this photo released by the U.S. Coast Guard, a coast guard vessel searches along the Na Pali Coast on the Hawaiian island of Kauai on Friday, Dec. 27, 2019, the day after a tour helicopter disappeared with seven people aboard. Authorities say wreckage of the helicopter has been found in a mountainous area on the island.  (Coast Guard via AP)

“The weather conditions are challenging,” said Petty Officer 1st Class Robert Cox, Coast Guard Joint Rescue Coordination Center Honolulu. “We have trained crews responding and on-scene searching for any signs of the helicopter and those aboard.”

The owner of the helicopter, who also owns Safari Helicopters -- a tour helicopter company based in Lihue, notified the Joint Rescue Coordination Center in Honolulu, which dispatched search crews, according to a press release issued early Friday by the U.S. Coast Guard's 14th District Hawaii and the Pacific.

A reporter at the station tweeted that the missing helicopter had an electronic locator, but there had not been any reports of signals being transmitted.

This photo provided by the Hawaii Department of Land and Natural Resources shows an area over Napali Coast State Wilderness Park where search and rescue searched for a tour helicopter that disappeared. (Dan Dennison/Hawaii DLNR via AP)

The Na Pali coast is largely uninhabited and includes a state park popular with helicopter tours.