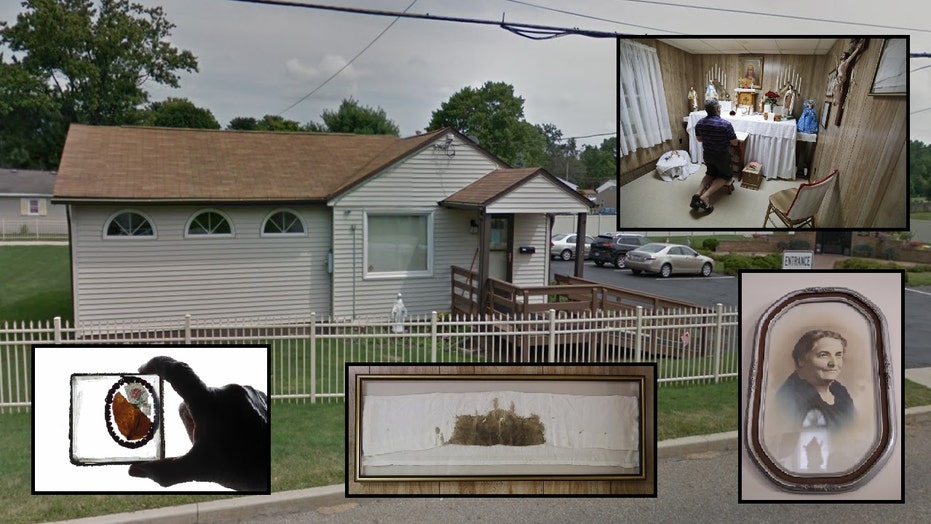 A seemingly average home in Canton, Ohio has become the "miracle house" where pilgrims flock in search of a touch from God.

The wood frame bungalow on the outskirts of town is where Rhoda Wise, who died in 1948, claimed Jesus and St. Therese visited her and answered her prayers in her room.

Wise's legacy as a Christian mystic has only grown over the last seven decades. Last fall, after years of discussion, the local Roman Catholic diocese petitioned the Vatican to make her a saint, which could make her the fourth American-born one, further renewing interested in her former home.

In this Aug. 9, 2019, photo Marge Ruminski, from Parma, Ohio, sits in the chair where Rhoda Wise was visited by Jesus Christ in front of the altar in Canton, Ohio.

“She saw Jesus,” Denise Kleinhenz, 49, told the Associated Press with wonder in her voice. “And He came more than just once. It just makes me think about, that He exists.”

Wise, raised a Protestant, converted to Catholicism in 1939 after becoming interested in the Rosary and St. Theresa. That same year, after doctors sent her home to die alongside her alcoholic husband and adopted daughter, she recorded Jesus appearing in a bright light next to her bed on May 28.

MEMBERS OF LIBERAL CHURCH MOUNT LOUD PROTEST AGAINST NEW PRIEST WHO FAVORS TRADITIONALISM: 'WE ARE BEING ABUSED'

A month later, on June 28, she recorded that Jesus and St. Therese, known as the "Little Flower" among Catholics for promising to send down a shower of roses from heaven, visited her and healed her abdomen.

In this Aug. 9, 2019, photo the 1940's rose petal, a piece of stigmatic clothes from a wound when she bled and a piece of Rhoda Wise's dress are held up in Canton, Ohio. Late in the summer of 1939, crowds of strangers started showing up at Rhoda Wise’s house next to a city dump in Ohio after she let it be known that miracles were occurring in her room. (AP Photo/Tony Dejak)

Then on August 15, 1939, Wise recorded St. Therese visiting her again and asking her to get up and walk. When she got up, her injured foot was allegedly healed and the cast on it "split open from top to bottom," and she easily walked out of it. Her husband, upon seeing it, reportedly stopped drinking.

Jesus then allegedly appeared to her again on April 3, 1940, and told her to write something down.

“You were chosen because you had the faith of a little child and believed everything that was told to you," Wise recorded Jesus telling her. "Some think they believe, some want to believe, you did believe and for your faith, suffering, patience, and courage to carry on when all were against you, I have chosen you for great work.”

In this Aug. 9, 2019, photo a framed photograph of Rhoda Wise is displayed in Canton, Ohio.

Another mystical phenomenon Wise reported was a condition called Stigmata, where there is spontaneous bleeding on the locations of the body corresponding to the crucifixion wounds of Jesus. It was recorded that Wise had red marks on her hands, feet, and head on the first Friday of every month for several hours.

Today her room is crowded with statues and relics. Photos of Wise bleeding from the head and hands are displayed alongside bandages with her dried bloodstains, and the Jesus chair, where many come to sit, is now covered in gold.

EDS NOTE: GRAPHIC CONTENT - In this Aug. 9, 2019, photo a photograph of Rhoda Wise and the dress she wore in the photo when she suffered the phenomenon of stigmata, bloody wounds on her head, hands and feet like those Jesus suffered on the Cross, is displayed in Canton, Ohio. Late in the summer of 1939, crowds of strangers started showing up at Rhoda Wise's house next to a city dump in Ohio after she let it be known that miracles were occurring in her bedroom. Seven decades later, people still make pilgrimages to the wood frame bungalow at the edge of Canton seeking their own miracles.

One of Wise's granddaughters, 71-year-old Darlene Zastawny, was raised in the house and remembers strangers showing up at all hours of the day.

“I always wondered who all these people were that my mother would let in,” Zastawny told AP. “I’d be getting ready for school when I was little and there would be a stranger sitting with us because she wouldn’t tell them no. I knew it was special, but sometimes I wished it was more of a home. There was somebody coming all the time, but you get used to it.”