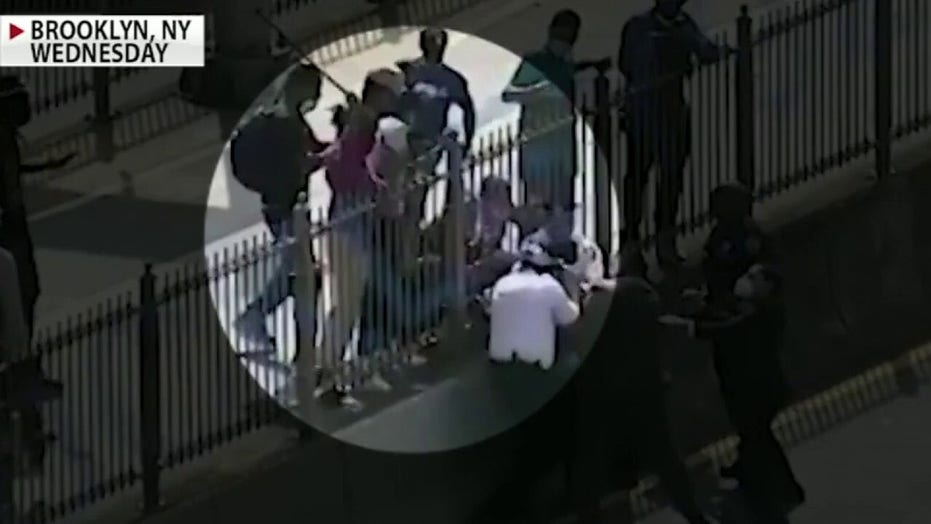 A New York Police officer seriously injured during what was poised to be a "peaceful" protest on Wednesday is said to be contending with two broken orbital bones inside the eye, a dozen stitches and a possible concussion.

He was seemingly struck in the face by an attacker donning something akin to brass knuckles, sources close to the injured police lieutenant -- who has since been identified by the NYPD as Richard Mack -- told Fox News.

The calamity began Wednesday morning ahead of a planned rally against gun violence and in support of police – in the aftermath of a fatal shooting of a one-year-old in Brooklyn on Sunday night – in which demonstrators were crossing from the Brooklyn side of the storied Brooklyn Bridge. However, counter-protestors had already started crossing from the Manhattan side, prompting an NYPD officer stationed near the bridge's midpoint to call for assistance.

"These were new faces; we know they weren't part of the (previous) peaceful protests. We were trying to stop them from getting onto the bridge from the Manhattan side, but they were just jumping over and going around," one officer involved in the incident, but who requested anonymity as they are not authorized to speak on the record, told Fox News. "And then we got the call that a lot of people were already there in homemade armor – painted shoulder pads and things – and there was a sense that they were looking for a fight."

Thus around 18 police officers on bicycles started heading to the midpoint, but en route shortly after 10 am, tensions flared when a man allegedly swung a wooden object – some kind of stick or cane – at a group of officers, which included the Chief of Department Terence Monahan as they were making an arrest.

The sticks used in the assault were believed to have been dropped off earlier that morning and left in a box at the location. Mack is said to have gone after the stick-wielder when he was then attacked by another demonstrator who began punching, prompting the officer to hit back until blood was gushing from his face in what is presumed to have been a strike involving something like brass knuckles.

At some point, pepper spray is also alleged to have been used on the injured officer as others in the vicinity yelled barbs toward the downed policeman ranging from "f**k you" to "I hope you die." And as Mack was being taken into an ambulance, a witness recalled, protesters, shouted that he deserved it as others attempted to aid the attacker in getting away.

The NYPD has since released the video of the bridge brawl on their Twitter account and announced a $2,500 reward for any information leading to the individual's arrest. The assailants are believed to be "anarchists" who police officials said "infiltrated the Black Lives Matter (BLM) movement from the beginning."

The footage shows the man, wearing a maroon shirt, khaki pants and a red bandana around his neck, holding the stick in his right hand as he climbs a fence on the bridge and runs from the area.

In addition to Monahan and Mack, at least two other officers were injured.

At least 36 people from the protest were arrested or ticketed, police said, with 26 receiving summonses, several others were issued desk-appearance tickets, and five were fully charged.

PROTESTER ATTACKS NYPD OFFICERS, INCLUDING CHIEF OF DEPARTMENT, AS THEY MADE ARREST

The violence was spurred just hours before Mayor Bill de Blasio signed a package of police accountability bills into law, including what Monahan has described to the press as the diaphragm portion of an anti-chokehold bill." This essentially prohibits the sitting, kneeling, or standing on a suspect's chest or back in a manner that compresses the diaphragm when making an arrest.

"As you saw on the bridge yesterday, we as the New York City Police Department, we can't concern ourselves with that when we're making an arrest," he told local radio station WCBS 880 on Wednesday. "When we were struggling, fighting with that guy, I can't think about is my knee going to go across his back or not. I have to get that individual into custody before someone else gets seriously injured."

A source close to Mack also noted that the Lieutenant lamented after the incident that the new legislation had also stopped him from defending himself or rigorously fighting back during the showdown.

"They can choke you, but you can't choke them," the NYPD source noted.

Yet when asked about the outburst during a press conference on Thursday morning, de Blasio condemned the bloodshed as "absolutely unacceptable."

"There's no situation in which it is acceptable to attack a police officer. Period," the mayor said, adding that he spoke to Monahan after learning of the attack. "Here's what is the reality: anyone who does that will suffer the consequences."

But for many NYPD veterans, who are battling rising crime amid the ongoing unrest, what those consequences are seems somewhat murky.

"Morale isn't too great right now," the officer added. "In fact, it's horrific. Everyone is depressed, and no one is sure what is going to happen."