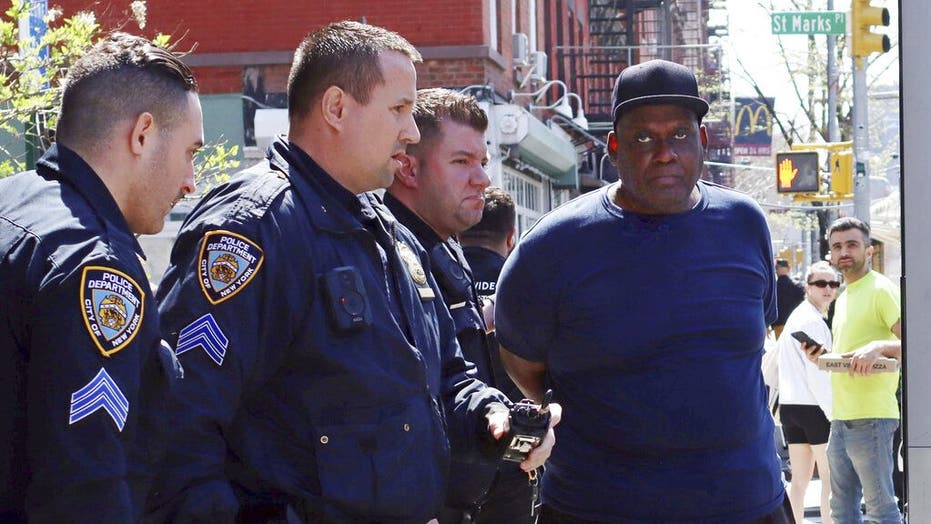 Frank R. James, the 62-year-old man accused of popping a smoke canister in a crowded New York City subway car before opening fire during the Tuesday morning rush hour, is in police custody after a good Samaritan spotted him walking down a Manhattan sidewalk in broad daylight Wednesday.

In 30 hours between the attack and his arrest, investigators obtained and distributed images of the suspect in the hope that the public could help catch him. They searched a storage unit and apartment linked to him in Philadelphia, which he had spoken of in numerous videos posted to a now-disabled YouTube channel. Then he was spotted wandering around Manhattan and may have taunted investigators by calling in the tip line to report himself, according to law enforcement sources, even as a security camera technician spotted him in the East Village and turned him in.

He had reserved it and prepaid on April 6, according to a federal criminal complaint, using his Wisconsin driver’s license, as a well as a phone number linked to bank cards in his name that investigators would later find at the scene of the shooting.

Then he drove to New York City.

At 4:11 a.m., surveillance cameras captured him driving the rented Chevrolet on the Verrazzano-Narrows Bridge, a span that connects Staten Island to Brooklyn.

At 6:12 a.m., another camera spotted the van at West Seventh Street and Kings Highway in Brooklyn, near where police later recovered the vehicle.

The camera recorded "an individual wearing a yellow hard hat, orange working jacket with reflective tape, carrying a backpack in his right hand and dragging a rolling bag in his left hand, leaving the U-Haul vehicle on foot."

At around 8:25 a.m., James, wearing a gas mask and bright nylon safety vest, allegedly boarded a Manhattan-bound N train near where he left the van, activated a canister of smoke and opened fire just before it pulled into the 36th Street station in Sunset Park.

At 8:40 a.m., another surveillance camera captured a man investigators believe is James exciting another N train station at 25th Street. At this point, the vest, mask and hardhat seen in earlier images is gone, but police say the face appears to match his Wisconsin driver’s license photo.

Bystander video shows the train’s doors billowing smoke after they opened. Passengers flooded out in a panic, fleeing the mayhem. At least 29 people were injured, including 10 with gunshot wounds. Five were critically injured, according to authorities.

In this photo from social media video, passengers run from a subway car in a station in the Brooklyn borough of New York, Tuesday, April 12, 2022. (Will B Wylde via AP)

Police found two bags at the scene. One contained a Glock 17, a gas can, a torch, the key to a U-Haul vehicle and bank cards, according to a federal criminal complaint. The other contained commercial fireworks.

SCENES FROM THE ATTACK:

Also left behind was the safety vest.

Investigators have identified Frank James as a suspect in the Brooklyn subway shooting.  (NYPD)

Police said the pistol had been legally purchased in Ohio in 2011 by Frank Robert James. But "an attempt was made to deface the serial number." The bank cards had James’ name on them as well, and investigators said records that U-Haul provided showed James had rented a van in Philadelphia Monday with Arizona plates. They found it abandoned on Kings Highway and later found it on surveillance video showing it crossed the Verrazano Narrows Bridge about four hours before the shooting.

They also said they found a receipt for a storage unit in Philadelphia – where investigators said they found 9 mm and .223 caliber ammunition, targets and a threaded pistol barrel, according to the complaint.

A Twitter user identifying as Jack Griffin shared two images of a "possible frank james sighting" around 10:30 a.m., showing a heavyset man matching James' description walking on a Lower East Side sidewalk and sitting at an outdoor dining area.

Finally, police from the NYPD’s 9th Precinct arrested James Tuesday afternoon in the East Village neighborhood of Manhattan after receiving reports of sightings in the area.

Zak Dahhan, 21, told Fox News he was performing maintenance on a store’s security cameras when he saw James walking down the street with a bag over his shoulder. 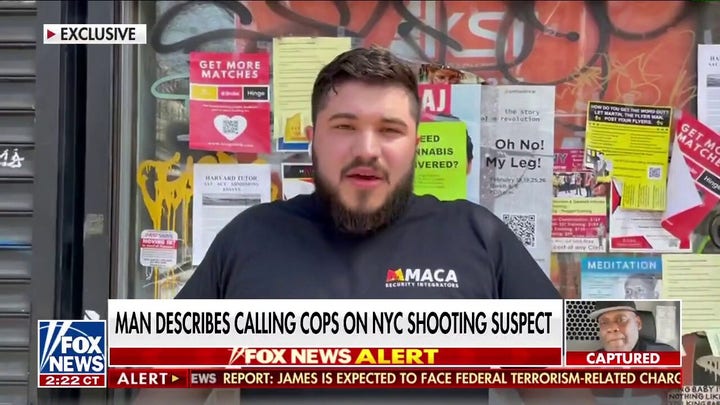 Police also said that a tipster had called in a sighting of James at a nearby McDonald’s restaurant, and responding officers arrived but did not find him there. 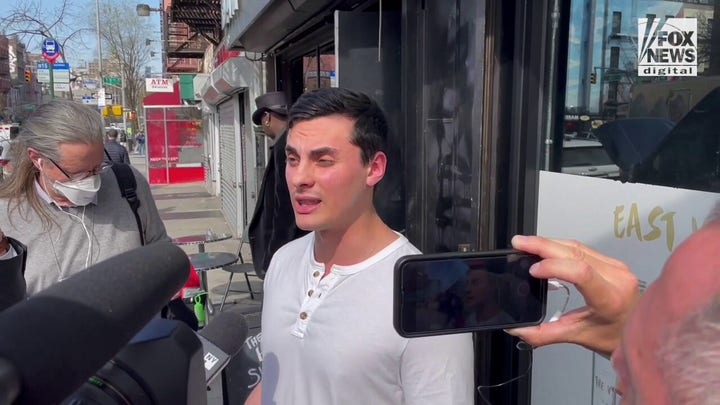 Law enforcement sources separately told Fox News Digital that James had reported himself to the Crime Stoppers hotline before his arrest.

Police caught up with James nearby outside a liquor store, where images show officers leading away the suspect, who was wearing dark pants, a navy blue T-shirt and black flat-brimmed hat.

"We got him," New York City Mayor Eric Adams declared during an afternoon news conference.

James made his first appearance in federal court in Brooklyn.

In this courtroom sketch, Frank James, seated at center of right table, and on left of the screen, upper right, appears during the brief proceeding in a federal court in the Brooklyn borough of New York, Thursday, April 14, 2022. James, accused of opening fire on a crowded subway train in Brooklyn, was ordered held without bail as prosecutors told a judge Thursday he terrified all of New York City. (AP Photo/Elizabeth Williams)

His defense attorney Mia Eisner-Grynberg, a federal public defender, said her client called police on himself "to help."

"What happened in the New York City subway system on Tuesday was a tragedy," she said. "It is a blessing that it was not worse."

She urged against a "rush to judgment" and said James called police after he saw his photograph on the news.

Mia Eisner-Grynberg, of Federal Defenders of New York and lawyer for mass shooting suspect Frank James, speaks with members of the media after a brief proceeding in Federal Court on April 14, 2022 in New York City.  (Photo by Michael M. Santiago/Getty Images)

"He called Crime Stoppers to help," she said. "He told them where he was. Initial press and police reports in cases like this one are often inaccurate. Mr. James is entitled to a fair trial, and we will ensure that he receives one."

James, whose record contains misdemeanors including stealing, tampering and criminal sex acts stretching back to the early 1990s, is expected to face federal terror charges in connection with the attack on mass transit, according to Breon Peace, the U.S. Attorney for the Eastern District of New York.

For years before the attack, he posted offensive and incendiary videos to a barely viewed YouTube channel that surged in views Tuesday after police named him a person of interest.

He titled them with phrases including "DOMESTICATED AVERAGES" and "SENSIBLE VIOLENCE," and posted hour-long, profanity-laced rants. The banner image showed an alarm clock reading "Too Late."

Police even used a still image from one of the videos when they blasted out his face to the public for help solving the case.

A March 1 video began with a local television news report about rising violence in New York City’s subways. In it, he went on to criticize Mayor Adams, women, social workers and homeless people.

James is due in federal court in Brooklyn Thursday.