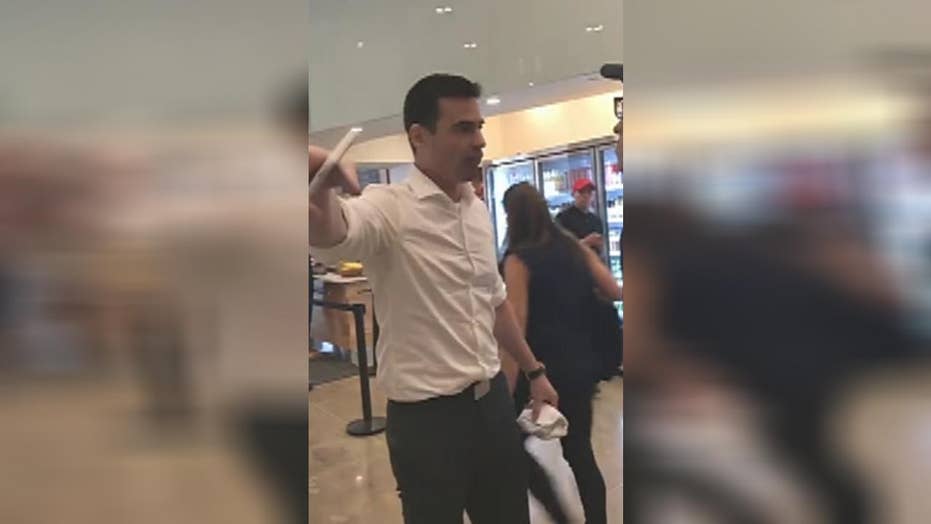 The New York City lawyer caught on video this week launching a racially-charged tirade against Spanish-speaking restaurant workers is facing legal complaints from elected officials and has been booted from his office as his whirlwind fall from grace continues Friday.

Aaron Schlossberg, who has been continuously denounced on the Internet since the footage emerged Wednesday, also has been panned by fellow lawyers over the clip in which he is heard threatening to call Immigration and Customs Enforcement to have workers at the Manhattan eatery “kicked out of my country.

“I was taken aback that he would have the balls to come to court in front of all of his colleagues after his crazy outburst,” one attorney told the New York Post Thursday at the Supreme Court in Long Island City, where Schlossberg appeared.

But before even showing up Thursday, Schlossberg -- who apparently had a penchant for giving people an earful in public, according to numerous videos that have surfaced purportedly showing him yelling elsewhere – was filmed hiding behind an umbrella after reporters confronted him outside his apartment.

“Why you running man, you don’t want to stand by what you said?” a reporter is heard asking the lawyer, who has not made any public statements following the incident.

“I think it’s all men,” Schlossberg is then heard saying into a cellphone while pressing himself up against the window of a building. “They are yelling, they are claiming things they aren’t true. They are grabbing my personal items.”

“We’re claiming things that aren’t true? You mean we are only talking about what you said yesterday that was on videotape,” the reporter responds. “We did not grab you once sir.”

Schlossberg – who on Thursday was kicked out of the business center on 275 Madison Ave. that housed his office – is also at the center of a pair of formal complaints that Rep. Adriano Espaillat (D-N.Y.) and Bronx Borough President Ruben Diaz Jr. filed with the state’s court system.

“Racism and hatred have no place in New York State, and certainly no place in our justice system," Diaz Jr. said in a statement. "I stand with Congressman Espaillat in calling for the disciplinary committee of the New York State Unified Court System to examine the attorney identified as Aaron Schlossberg's reprehensible behavior and review his law license for possible revocation."

The lawyer appeared in Long Island City, a neighborhood in the Queens borough, to represent medical clinic Aimes Enterprises Inc.

Its chief, Tom Major, told the New York Post on Thursday that he was unaware of Schlossberg’s viral tirade.

“This is the first time I’m aware of something like this,” he said, when asked to comment on the clip.

Another one of his reported clients, real estate investor and film producer Todd Courtney, also said to the newspaper that he hasn’t seen the clip.

But a former client said Schlossberg turned sour on him after switching attorneys during the middle of a lease dispute last September.

“When we stopped working [with him], he start screaming and all this stuff,” Gennadiy Kosyakovskiy told the New York Post.