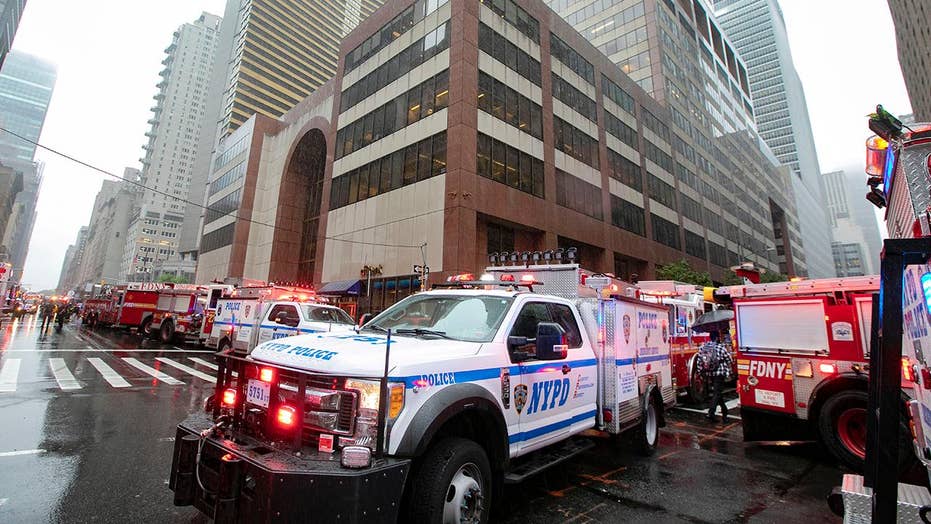 Investigation begins into what led to deadly helicopter crash in Manhattan

The NTSB is getting their first look at the crash site atop a skyscraper in Midtown Manhattan after a private helicopter crashes on a roof, killing the pilot; Bryan Llenas reports from the scene.

The deadly helicopter crash landing near America’s most-visited tourist attraction is prompting calls from lawmakers for tighter restrictions on flights around New York City, warning that the risk to the public is “just too high.”

A privately-owned helicopter that took off from Manhattan’s East 34th Street Heliport on Monday afternoon during rainy and foggy weather slammed into the top of the AXA Equitable building near Times Square about 11 minutes later, killing its pilot. Shortly afterward, lawmakers were sounding the alarm on the liabilities of allowing pilots to operate aircraft in the area.

"I truly, deeply believe that non-essential flight should be banned from New York City. It is just too densely populated. It is too dangerous. And there is absolutely no safe place to land," said Rep. Carolyn Maloney, D-N.Y.

"We cannot rely on good fortune to protect people on the ground,” she added. “It is past time for the FAA to ban unnecessary helicopters from the skies over our densely-packed urban city. The risks to New Yorkers are just too high.”

Keith Powers, a Democrat on the New York City Council, also told Pix 11 that he has “always heard concerns about flights over Manhattan.

“And on a day like today, where you can see what the weather is like, the thing I want to understand next is why is someone allowed to be able take off,” he said. “Today especially if it's a non-essential, non-emergency helicopter.”

Tourists in New York City often pay hundreds of dollars to ride in helicopters so they can capture aerial photos and videos of its iconic skyline. Other flights shuttle executives and customers to airports in the area – or to affluent communities in regions like the Hamptons, on the east end of New York’s Long Island.

New York City officials update the fatal crash-landing in Midtown Manhattan, say there is no indication of terrorism or ongoing danger to New Yorkers.

The deadly crash Monday is the latest in a series of recent helicopter incidents in New York City.

Last month, a helicopter fell short of its landing pad and ended up in the Hudson River, with its pilot safely escaping.

In March 2018, five passengers were killed when a helicopter that was on an open-door photo shoot suffered an engine malfunction and crashed into the frigid East River.

In 2009, another sightseeing helicopter struck a small, private plane over the Hudson River, killing nine people.

The massive emergency response on Monday after a helicopter crashed on a building in New York City. (Greg Norman/Fox News)

And in 2006, a small plane carrying New York Yankees pitcher Cory Lidle crashed into a 50-story luxury condo building on Manhattan's Upper East Side, killing him and his instructor.

The calls from lawmakers for more restrictions would add to a list of rules and regulations that pilots must adhere to when flying around the Big Apple.

Helicopters were banned from taking off and landing on Manhattan rooftop helipads in 1977, after one crashed on top of the Pan Am Building – which is now called the MetLife Building – killing five.

A route chart from the Federal Aviation Administration instructs pilots to fly north and south only on designated sides of the rivers that surround Manhattan Island.

Authorities say the pilot was killed when a helicopter crash-landed on the roof of a midtown Manhattan skyscraper; Bill Hemmer reports.

Over the island, a flight restriction has been in effect since President Trump’s election prohibiting all aircraft from flying below 3,000 feet within a 1-mile radius of Trump Tower, the Associated Press reported, among other rules.

Police suggested the helicopter that crashed Monday was returning to its home airport in Linden, N.J., when it fell out of the sky.

New York City Mayor Bill de Blasio told CNN that “we need to know a lot more about what was happening with this individual at the time he made this decision to take off.

“It just -- I'm having trouble following why he would have gone back up over Midtown Manhattan if his destination was well to the south in New Jersey,” he added. “Something doesn't follow here but that's why we're doing the full investigation.”

"And I remember that morning all too well," he told reporters. "So as soon as you hear an aircraft hit a building, I think my mind goes where every New Yorker's mind goes."