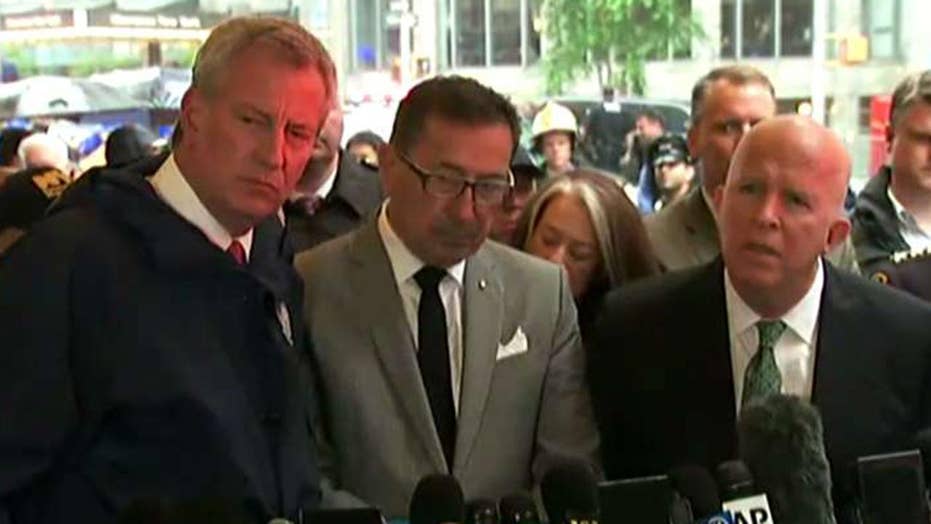 New York City officials updated the fatal crash-landing in Midtown Manhattan, said there is no indication of terrorism or ongoing danger to New Yorkers.

NEW YORK CITY – At least one person was killed after a helicopter made a "crash landing" on the roof of a high-rise building in New York City on Monday, sparking a massive emergency response, officials said.

The crash-landing unfolded on the roof of 787 Seventh Avenue in Midtown Manhattan and a fire was extinguished, the New York Police Department said. It happened at around 2 p.m. in a steady rain and clouds that obscured the roof of the tower, the AXA Equitable building, located just north of Times Square.

The New York Fire Department said the helicopter's pilot, later identified as Tim McCormack, died. It did not appear anyone else was on board.

Sources told Fox News’ Rick Leventhal the helicopter experienced mechanical failure and had to make an emergency landing on the roof of the high-rise building.

In a news conference later Monday afternoon, New York City Police Commissioner James O’Neill confirmed the privately owned helicopter took off from the 34th Street Heliport on the east side of Manhattan around 1:32 p.m. He said investigators believed the pilot was conducting “executive travel” and was headed to the “home airport in Linden, N.J.” O’Neill said the helicopter crashed on the roof 11 minutes after takeoff.

De Blasio said that according to preliminary information it appeared no passengers were on board, adding that there were “no other injuries that we know of at this point in time.” He also said the cause of the incident has not yet been determined. 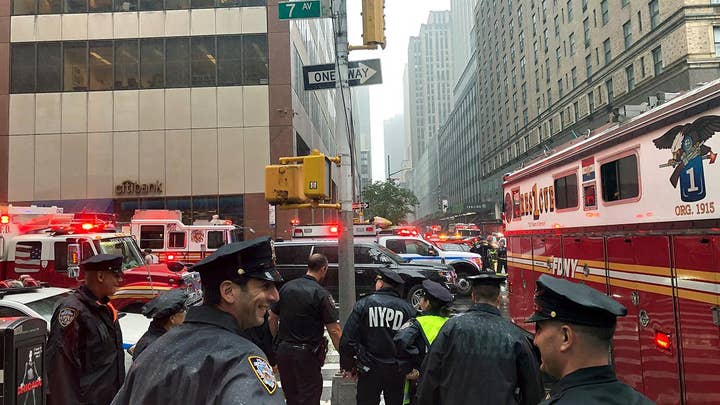 The FDNY tweeted Monday, “#FDNY confirms a helicopter has crash-landed onto the roof of 787 7th Ave in Manhattan. The fire has been extinguished, and members continue to operate in response to fuel leaking from the helicopter. There is currently one fatality reported.”

In the news conference, New York City Fire Commissioner Daniel Nigro said fuel leaking from the helicopter has been “mitigated.”

“We went to the 51st floor and took stairs to the roof. We saw a debris field that was on fire, with the fire contained to the roof. Unfortunately there was one casualty,” FDNY Lt. Adrienne Walsh with Rescue one later told reporters. His unit responded first to the scene.

“Whenever we have a fire on a high-rise office building – 54 stories is over 700 feet tall – we have challenges getting enough water pressure up to the higher levels of the building, but we have Standard Operating Procedures in place,” Richardson said. “We have fire engines that connect to the standpipe system and supply pressure. We also use the manual fire pumps in the building to increase the pressure.”

He added that firefighters arrived at the scene within five minutes and most of the fire was extinguished within a half hour.

“FDNY operations have now concluded. We had 43 FDNY units on scene, and our members operated bravely and with efficiency,” Richardson said on Monday evening.

A man who was in the building told Fox News' Shepard Smith he was at his desk when he felt something shake.

"It was clearly not something normal," Zach Escalante said. "Clearly something different."

Other witnesses said it felt like a "small earthquake," Smith reported, adding Fox News confirmed there was no helipad on the roof of the building.

A massive emergency response on Monday after a helicopter crashed on a building in New York City. (Greg Norman/Fox News)

Escalante said everyone in the high-rise was told to head out of the building and to not take any elevators as they were sent home for the day.

"No one trampled themselves, which was encouraging, and as a result people got out very quickly," Escalante said.

In a briefing with reporters about 20 minutes after the crash, New York Gov. Andrew Cuomo said the aircraft had to do an "emergency, crash" landing. The governor added that there was "no indication it was more than that," adding it was still early in the investigation.

The incident, close to both Rockefeller Center and Times Square, sent rescue vehicles swarming to the building and immediately evoked memories of the Sept. 11 attacks, though officials said there were no indications it was related to terrorism.

A massive emergency response on Monday after a helicopter crashed on a building in New York City. (Greg Norman/Fox News)

"If you're a New Yorker, you have a level of PTSD, right, from 9/11. And I remember that morning all too well. So as soon as you hear an aircraft hit a building, I think my mind goes where every New Yorker's mind goes," Cuomo said.

A woman who was in the building where the crash took place told Fox News she heard a "loud boom" and then the whole building shook.

The Federal Aviation Administration (FAA) tweeted Monday, "An Agusta A109E helicopter crashed on the roof of 787 Seventh Ave. in New York at around 1:45pm today. Preliminary information is that only the pilot was aboard. FAA air traffic controllers did not handle the flight. The NTSB will be in charge of the investigation and will determine probable cause of the accident."

An Augusta A109E helicopter is a twin-engine, high-speed single-pilot helicopter configured for seven passengers and is reportedly the fastest helicopter in its class.

Videos posted by onlookers showed emergency vehicles in the street, but no obvious damage to the skyscraper.

New York Gov. Andrew Cuomo says no injuries have been reported and the building is being evacuated.

A woman told Fox News she didn't hear the crash, but people in her building were also told to leave.

"I guess the people on the other side felt something," a woman who was in the building across the street told Fox News, adding that she and employees were then told they had to evacuate and "get out"

President Trump said he has been briefed on the crash, tweeting, "Phenomenal job by our GREAT First Responders who are currently on the scene."

"THANK YOU for all you do 24/7/365! The Trump Administration stands ready should you need anything at all," the president said.

New York's Office of Emergency Management said that the crash and associated emergency response was causing road closures and a "heavy presence of emergency personnel." Numerous roads were also closed, snarling traffic in the busy section of the city.

The 54-story building is known as the AXA Equitable building, which opened in 1986. It is a 54-floor, 752-foot tall skyscraper outfitted with such amenities as a fitness club and auditorium.

New York City has a history of both minor and major helicopter wrecks and crash landings.

Last month, a helicopter crash-landed in the Hudson River near a busy Manhattan heliport. The pilot escaped mostly unscathed.