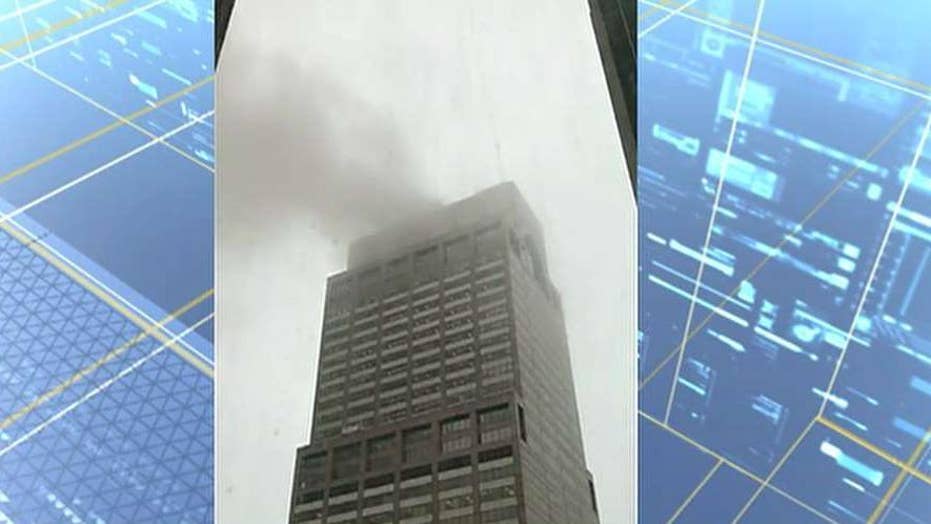 Authorities say the pilot was killed when a helicopter crash-landed on the roof of a midtown Manhattan skyscraper; Bill Hemmer reports.

The streets of Midtown Manhattan were filled with fire trucks, police cars and other emergency vehicles Monday afternoon as first responders headed to the area after receiving reports that a helicopter made a "crash landing" on the rooftop of a skyscraper along Seventh Avenue.

At least one person, identified as the pilot, was killed in the crash, the New York City Fire Department said. It does not appear anyone else was on board when the crash occurred at around 2 p.m.

Photos released by the FDNY showed part of the wreckage and building damage.

Shortly before 3 p.m., President Trump confirmed he had been briefed on the incident in New York City.

"Phenomenal job by our GREAT First Responders who are currently on the scene. THANK YOU for all you do 24/7/365! The Trump Administration stands ready should you need anything at all," the president tweeted.

Witnesses quickly took to social media to share videos and photos from the smoky scene ⁠— which did not reveal any obvious damage to the skyscraper located near Rockefeller Center.

One man, who said he works about one block south of the incident, said he heard a "loud sound" and saw a "sheet of flame" coming from the roof of a building. A video he shared on Twitter was viewed nearly 215,000 times in less than 20 minutes.

Another person documented the "massive emergency response" in Midtown, showing bystanders in Times Square looking up as smoke fills the sky and sirens are blasting.

USA TODAY columnist Ed Baid said poor weather conditions made it difficult to capture a clear image of the aftermath on the roof of 787 Seventh Avenue.

"Rain and angle makes it difficult to see but here is the view from our office window across the street from scene of helicopter crash on roof of 787 7th ave in nyc. @USATODAY heavy fire and police presence around building," wrote Baid, while sharing four photos on Twitter.

A man who said he, too, works nearby, saw "tons of fire trucks" on the street below.

"Apparently a helicopter crash-landed at the roof of that building! One block from our office!" he tweeted, sharing two photos of his office view.

Here are some other photos and videos from the scene Monday.