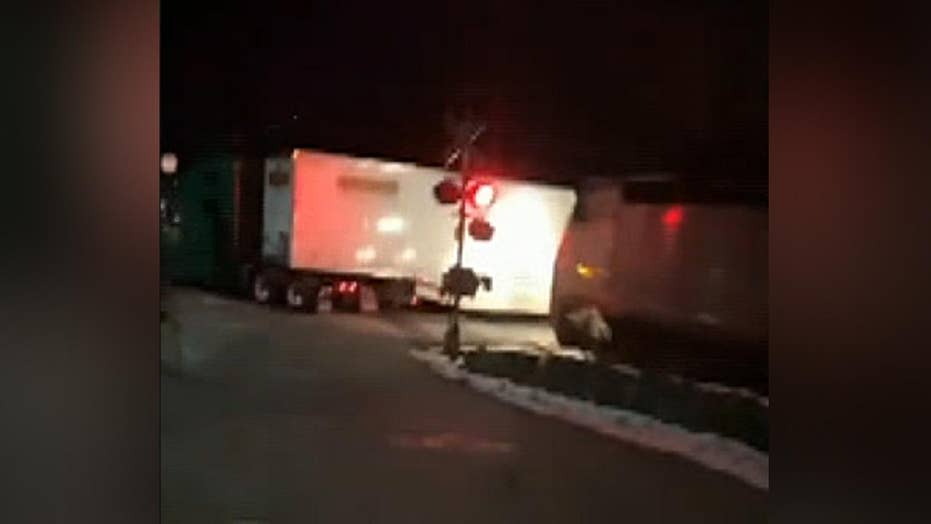 Raw video: No injuries reported after a Metro-North train crashes into tractor trailer in Sloatsburg.

A commuter train in New York tore a tractor-trailer in half after slamming into it Tuesday night at a railroad crossing north of New York City.

The Ramapo Police Department said the incident happened around 6:30 p.m. in the village of Sloatsburg, located about 35 miles northwest of midtown Manhattan.

Video from FOX5 showed the tractor-trailer split in half after the Metro-North commuter train collided with it.

Video of the crash recorded by Chris Schucht, of Tuxedo, New York, shows the train striking the trailer at the intersection of Orange Turnpike and Washington Avenue.

The scene after a Metro-North commuter train struck a tractor-trailer at a railroad crossing. (Town of Ramapo Police Department)

“Oh my goodness,” another witness can be heard saying as the incident unfolded. “Oh boy. Oh my God!”

Authorities in Ramapo said that despite the dramatic images of the splintered truck, there were no injuries reported.

The incident caused service along the Port Jervis line to be suspended in both directions for about two hours, according to FOX5. Service resumed with delays by 8:30 p.m.

The crash is now being investigated by the MTA Police Department.