New York Gov. Kathy Hochul (D) spoke to a group of women in New York City on Thursday but declined to speak about some of the biggest issues the country is faced with.

On Thursday, the Empire State’s 57th chief executive dodged issues like inflation and crime as she spoke at Columbia University.

NY GOV. HOCHUL ACKNOWLEDGES ‘THERE IS A CRIME PROBLEM’ AFTER CALLING REPUBLICANS ‘MANIPULATORS’ ON ISSUE

Instead, Hochul spoke about getting more women to vote and continue what women in 1848 fought for in Seneca Falls – women’s rights.

"What is on our shoulders as the women of today, because those women back then were so brave and so audacious, they went against the tides of their time," she said. "They were ridiculed and spit upon and jailed because they had the audacity to say, we have rights, and we have a right to fight for them."

Hochul also spoke about women of all colors getting the right to vote in 1964.

The moments of time led to the governor turning her attention to abortion and the Supreme Court’s decision to overturn Roe v. Wade.

That decision, she said, was made by Supreme Court appointees who were put in place by a president who, "should never have been there."

"We say we honor those women of the past, those fighters and those who shed blood to secure the right to vote," she said. "But also, we will stand up for future generations to say we will protect the right to an abortion in this state right here, right now and forever."

Hochul spoke of her Republican opponent Lee Zeldin, who she said has claimed nothing changed after Roe v Wade was overturned.

Hochul told her constituents to vote for her if they want to protect the right to an abortion, continue to have gun safety laws on the books, don’t agree that every teacher should be armed, and have common sense laws to protect citizens from being killed in the streets. 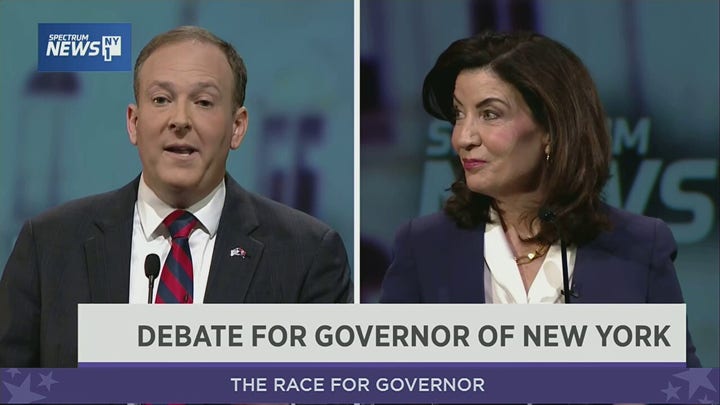