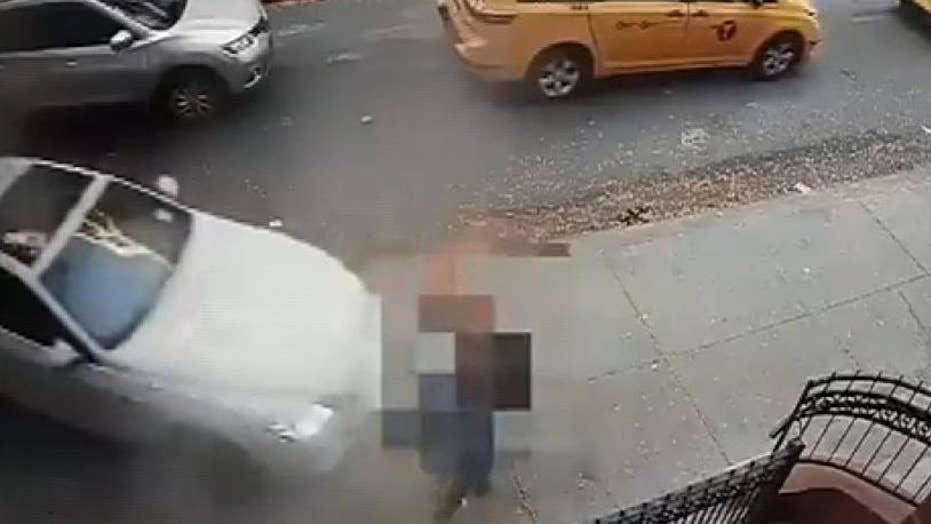 Raw video: The New York Police Department released video footage from security cameras showing a BMW jump a curb and ram into a man walking with his 8-year-old son.

New York City police were on the hunt Friday for two men caught on camera ramming their car into a father and his 8-year-old son.

The attack, which police believe was deliberate and directed at the father, happened in broad daylight on Nov. 6 in Manhattan.

Surveillance footage released by police shows a BMW being driven into the man and child as they were walking on a sidewalk near Central Park. The collision sent the pair flying through a nearby gate, police told the New York Post.

The footage jumps ahead to show two men exiting the car and approaching the victims. One of the men then slashed the father, according to the New York Daily News.

The attackers are later shown getting back in the car and fleeing the scene, while the father and son were taken to a local hospital to be treated for non-life threatening injuries, police said.

Law enforcement sources that spoke to the New York Post say the father previously has been busted nine times for incidents such as robbery and grand larceny and has been uncooperative with police in their investigation.

Cops interviewed by the New York Daily News said police believe the driver of the BMW is a gang member and that the father is a member of a rival gang.