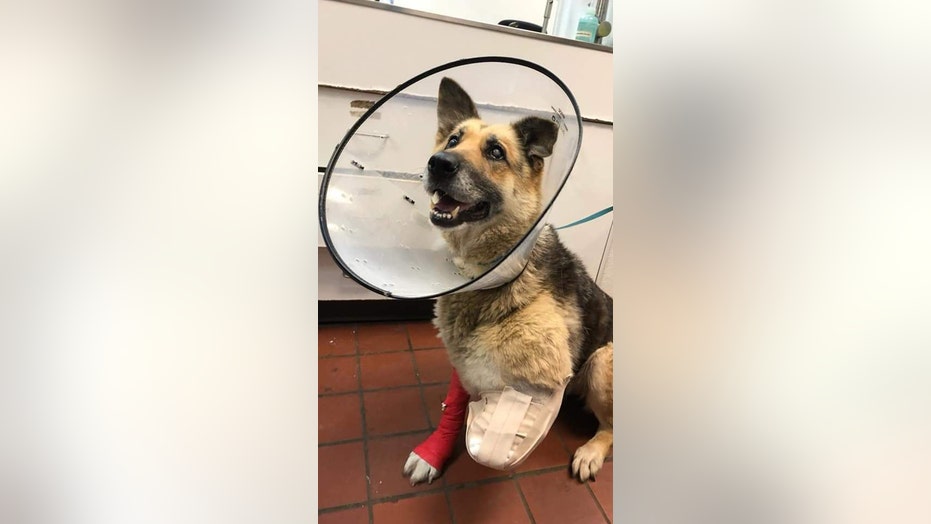 A German wire-haired pointer was out for a walk with his owner near their home in West Berkshire, England when he playfully jumped into a ditch and was speared with a metal spike that was hidden in the undergrowth. After undergoing surgery and receiving medical treatment for 8 days, the pup has returned home to fully recover.

A German shepherd chewed off her own leg while chained up without food or drinkable water, leading to the arrest of the New York man who police say was responsible for her.

Carl Pritchard, 59, was charged after a UPS driver reported seeing the dog, named "Zoe," in the yard of an Exeter home on Nov. 14, and told authorities it looked like the dog's leg was "blown off."

Zoe, a roughly 9-year-old German shepherd, was living outside in a plastic pet crate that had hay inside, with no food and a bowl of water that was frozen over, New York State Police wrote on Facebook Tuesday. She was discovered to be without her front left limb — which veterinarians believe was missing because she "chewed off her own arm," as some of the bones were found in her stomach.

Zoe, a 9-year-old German shepherd, was found living inside a plastic crate without food or water in Exeter, N.Y., authorities said. A UPS driver who reported her situation to police said it looked like her arm was "blown off." (New York State Police)

Dr. Joan Puritz, of the Oneonta Veterinary Clinic, said Zoe apparently chewed off her front leg, which may have been diseased or injured.

“The dog was very emaciated. She may not have been getting enough nutrition. The leg was probably injured and she was trying to take care of it herself," Purtiz said. "I’ve never seen anything like this. It breaks your heart. She’s such a sweet dog.”

Zoe was later taken to the veterinary school at Cornell University, where they learned the dog "is anemic, has a heart murmur and very likely has cancer," the SPCA wrote online. On Tuesday, animal rescuers said "the very large mass on her shoulder and into her chest looks to be a fatty tumor and not cancerous."

Despite not having cancer, Zoe still had to undergo surgery to remove the mass, which the SPCA said was "palliative and dangerous" because her "age, heart murmur and anemia are all very serious issues to be managed during a risky procedure."

The surgery, rescuers confirmed Wednesday, was a success. The mass was removed and veterinarians successfully amputated Zoe's leg. The SPCA said the hope is to have Zoe out of the hospital by Friday.

Anyone looking to adopt Zoe — who they believe should live without children or other animals, "because we know so little about her" — can contact the Susquehanna SPCA at 607-547-8111.

Pritchard was charged with overdriving, torturing and injuring animals, failure to provide proper sustenance and failure to provide appropriate shelter for a dog left outdoors. He surrendered Zoe to authorities because he couldn't pay for her vet bills, WIVB reported. He's scheduled to appear in court Dec. 4.