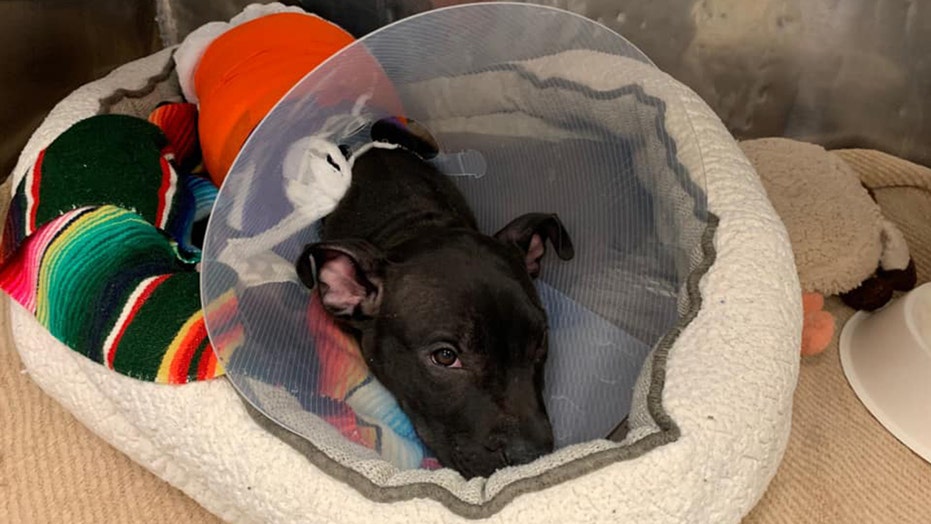 Two dogs were deliberately set on fire in New Jersey last week — horrifying animal rescuers who believe a blowtorch was used to viciously burn the animals.

The dogs — a 3-month-old pit bull named Tyler and a second, unidentified pooch — were burned "a week ago" in Paterson, a city roughly 22 miles northwest of New York City, according to the Ramapo-Bergen Animal Refuge.

"A witness saw Tyler and another dog lit on fire, we suspect with a blowtorch," the group wrote on Facebook Monday. "The Good Samaritan who found Tyler attempted to treat his wounds for a week, but he was in pain and deteriorated, so he was brought to Oradell Animal Hospital last night."

Rescuers said it's unclear what happened to the other dog who was also burned, but said they are working with authorities to investigate. The organization wrote: "This occurred in a dangerous area known for drugs and dogfighting, an area that we have rescued other dogfighting victims from."

Tyler was described as a "sweet and loving" puppy with "incredibly graphic and severe wounds all over his tiny body." Initially, rescuers believed the dog was burned some time ago, considering the skin near the burn was necrotic. Veterinarians had to cut away the dead skin to treat Tyler's burn wounds.

Tyler was one of two dogs to be burned, rescuers said. It's unclear what happened to the other dog, or where it is. (Ramapo-Bergen Animal Refuge)

"There is new skin growth in some areas, but in other areas doctors expect skin to die and the wounds to get worse before they get better, necessitating an extended hospitalization and treatment," rescuers wrote online. He's currently on fluids "to support his tiny body," and despite his wounds, Tyler "remains trusting towards his rescuers."

The animal rescue group said it's "inconceivable that someone could do this to two living, breathing, feeling beings," and said they're heartbroken "knowing that Tyler was found critically injured and burned and his condition worsened before he was given relief."

"It is even more painful to imagine the fate of the other dog that was lit on fire. Tyler is a victim, yes, but he is also a hero as he speaks to the perseverance and forgiving nature of dogs, particularly pit bulls, who are by far the most abused, exploited and misunderstood breed," the group said.

The refuge has teamed up with Jersey Pits Rescue, a local animal rescue that dedicates its efforts to help pit bulls in New Jersey, to assist with Tyler's recovery.