Police say the suspect accused of causing a 28-car pileup in Lakewood, Colorado is cooperating after being charged with vehicular homicide.

Rogel Lazaro Aguilera-Mederos, 23, of Texas, was arrested on suspicion of vehicular homicide, police said. He is slated to appear in court on Saturday for an advisement hearing. The charges stemmed from interviews and evidence, Lakewood police spokesman Ty Countryman said.

Authorities said it did not appear drugs or alcohol were involved and the crash does not appear to be intentional. Officials said they were looking into whether the truck's brakes were working. Aguilera-Mederos was not seriously injured in the crash. Lakewood Police spokesman John Romero told Fox News that Romero was in the United States legally and possessed a green card.

Law enforcement officials said the coroner's office was working on determining the identities of those who died. Six people were transported to the hospital with serious injuries. Their conditions were not immediately clear.

NJ FIREFIGHTER, 21, KILLED IN CRASH WHILE RESPONDING TO EMERGENCY CALL ON CHRISTMAS DAY

The 23-year-old semi-truck driver was heading down a hill when he slammed into traffic that had slowed due to a previous crash ahead of him, officials said.

The collision in the Denver suburb of Lakewood started a chain reaction and a diesel fuel spill, Countryman earlier told the Denver Post. The fire was said to be so intense that it melted the roadway and the metal off cars.

"This is looking to be one of the worst accidents we've had here in Lakewood," he said.

At least four people were killed in the crash on I-70 near Colorado Mills Parkway on Thursday, April 25, 2019. (AP)

“We’re still trying to identify what some of the cars even are,” Countryman said.

The Colorado Department of Transportation announced Friday that I-70 will remain closed in both directions at Denver West. Authorities said the highway may not open until Saturday due to the pavement conditions.

A spokesman for the National Transportation Safety Board said the federal agency is monitoring local authorities' investigation into the crash but it is not involved. Peter Knudson said NTSB teams get involved when the agency sees an opportunity to issue new traffic safety recommendations. 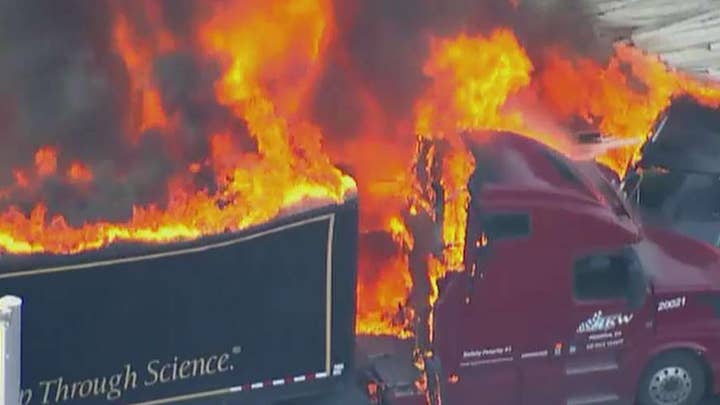 YouTuber Josh McCutcheon, who captured a video of a semi-truck speeding down the interstate. He posted the video on his YouTube channel, Burger Planet.

At least four people died Thursday when a semitrailer plowed into stationary traffic that resulted in explosions and flames on a Colorado freeway, authorities said. (AP)

Josh Laipply, the chief engineer with the Colorado Department of Transportation, warned drivers that they need to be more careful on the road.

"I think that we lose sight that vehicles are deadly weapons and all of us get a little careless at times and need to be more careful when we're driving," he said.