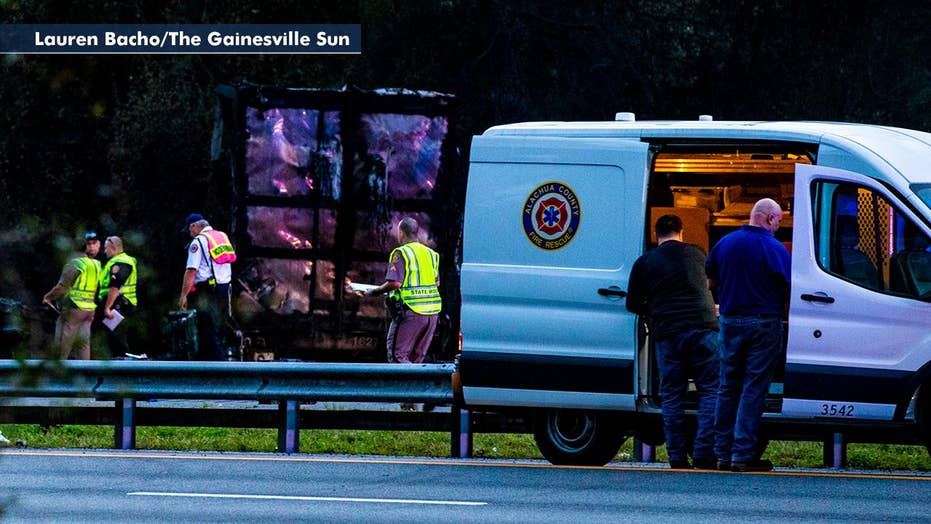 A passenger van headed for Disney World was involved in a multivehicle crash on Interstate 75 near Gainesville, killing 7 people inside; Laura Ingle has the latest update from the Florida Highway Patrol.

Authorities have released the names of the five children from a Louisiana church who were on their way to Disney World and the two adults who were killed in a fiery Florida interstate crash Thursday.

The Florida Highway Patrol said Friday that the children were Joel Cloud and Jeremiah Warren, both 14; Cara Descant, 13; Brieana Descant, 10; and Cierra Bordelan, 9. All were from Marksville, Louisiana, and were in a Pentecostal church van headed to the theme park when the accident occurred.

The children were members of the Avoyelles House of Mercy in Marksville, Louisiana, according to the Gainesville Sun.

The truck drivers who died in the crash were Douglas Bolkema, 49, of Albuquerque, New Mexico, and Steve Holland, 59, of West Palm Beach, Florida.

The highway patrol said a truck driven by Holland was traveling north in the far-right lane when it suddenly veered left and collided with a car driven by Robyn Rattray, 41, of Gainesville.

Both the truck and car went out of control and through the center divider, where Holland’s truck plowed into the church van driven by Amy Joffiron, 49, causing it to flip several times and eject some of the nine children on board. The highway patrol said it was not immediately known if any were wearing seatbelts.

Holland’s truck then struck a truck driven by Bolkema. Both trucks and Rattray's car caught fire, and a fifth vehicle hit at least one of the ejected van passengers.

Rattray and Joffiron suffered serious injuries, as did the four surviving children, who were also age nine to 14. They remain hospitalized, as does Karen Descant.

Court records show Holland received numerous tickets between 2000 and 2014 in Florida, Pennsylvania, Ohio, Indiana and Virginia for violations such as speeding, driving an unsafe vehicle, driving an overloaded vehicle and not carrying proof of insurance. Bolkema received a ticket in 1997 for following too closely.

5 CHILDREN FROM CHURCH GROUP BELIEVED TO BE ON WAY TO DISNEY WORLD AMONG 7 KILLED IN FLORIDA CRASH, POLICE CONFIRM

Investigators were working to determine what triggered the accident. The National Transportation Safety Board would send a team to investigate but cannot due to the partial government shutdown. The Florida Department of Transportation is investigating whether the guardrail should have stopped the northbound crash from crossing the highway or whether the accident was too severe.

Interstate 75 was shut down in both directions after the crash on Thursday, Jan. 3, 2019. (Lauren Bacho/The Gainesville Sun via AP)

“We are a small community with 6,500 people in town, and most everybody knows everybody else. It’s affected everybody. That is what’s so terrible about this,” he said. “You have a horrible accident with kids going to Disney to enjoy themselves and this happens. It’s just beyond belief. It just hasn’t set in yet, to just finish the Christmas holidays and have a new year start off with such tragedy.”

Walt Disney World officials have expressed sympathies to the families of the victims of the crash. Spokeswoman Jacquee Wahler said Friday that “there are no words to convey the sorrow we feel for those involved.”